The Cardano price continued its upward trajectory during the ongoing session, as ADA looks to test the resistance at $1.25. ADA had started the weekend in the red after pushing up to $1.14 on Friday, falling back by 1.23% on Saturday. Sunday saw ADA recover, rising by 1.51% and ending the weekend on a positive note. ADA continued to push higher on Monday, rising by nearly 5% and settling at $1.19 before pushing to $1.24 during the ongoing session.

The Cardano price started the previous weekend on a fairly bullish note, rising by 1.05% on Saturday and then dropping by over 2% on Sunday, ending the weekend at $1.03. Monday saw ADA recover, as the price pushed up by 1.54%, and then rose to $1.09 on Tuesday, registering an increase of over 4%. However, ADA fell back on Wednesday, dropping by over 6% and falling to $1.02. 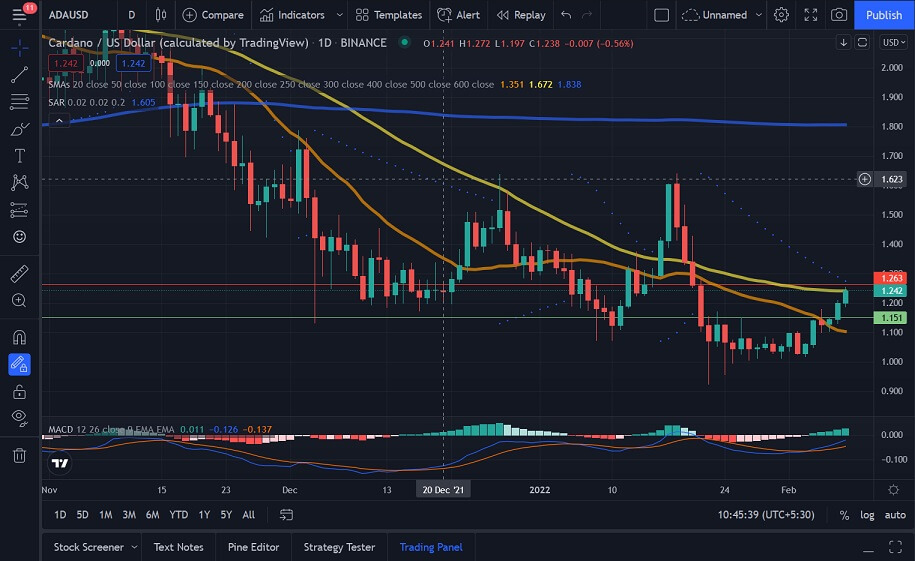 The Cardano price registered a strong recovery on Thursday, rising by 3.31% and moving to $1.06. Friday saw ADA continue to push higher, as the price surged by over 7% and settled at $1.14. At this level, the 20-day SMA was acting as resistance, and ADA fell back, dropping by 1.23% on Saturday before recovering on Sunday and ending the weekend at $1.14. Monday saw ADA register a significant increase, rising by almost 5% to $1.19 and then pushing up to $1.24 during the ongoing session.

We can see that the Parabolic SAR is currently bearish, but if ADA can move past the 50-day SMA, we could see it flip to bearish. 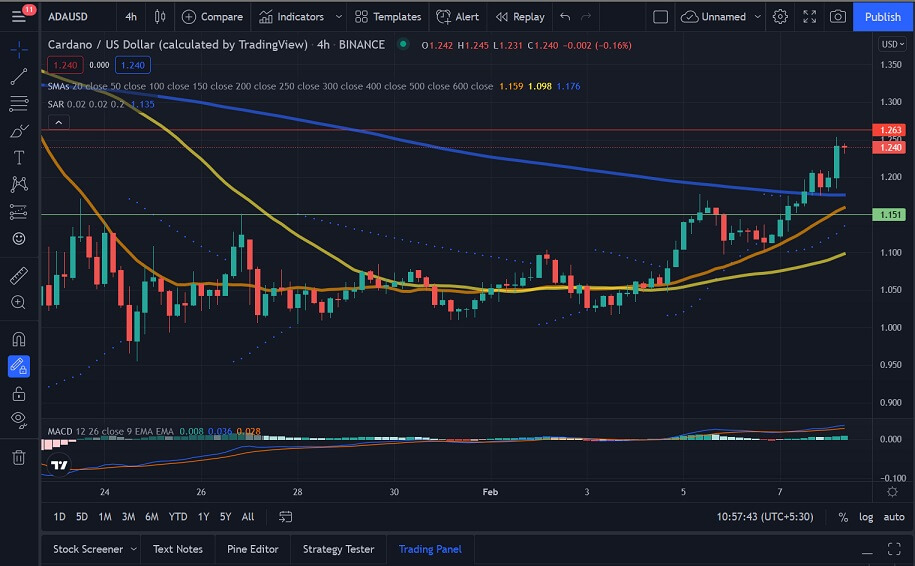 As the recent report on Cardano by Kraken Intelligence explained, EMURGO is “a for-profit global blockchain solutions provider that focuses on the promotion of Cardano-based commercial applications.”

Yoroi (named after the Japanese word “o-yoroi) is a light wallet for Cardano that was developed through a collaboration between EMURGO and Slovakian FinTech startup Vacuumlabs.

The latter is “a software development company that builds modern full stack fintech solutions for startups, scale-ups, and incumbent banks.” As EMURGO points out, “light wallets don’t need to download or synchronize the blockchain,” which “means that once you open the wallet, you can send or verify the reception of transactions right away.”

The company's recent blog post announced that “with the latest release of Yoroi Wallet v4.10, Yoroi Wallet’s desktop extension versions on Windows, MacOS, and Linux browsers now support dApp Connector capabilities.” However, it should be noted that “for Mozilla Firefox users, Yoroi’s dApp Connector is not yet supported,” but “it will be available in the near future.”

Looking at the Cardano price chart, we see that ADA has been extremely bullish in recent sessions but faces strong resistance at $1.26. If ADA can move past this level, we could see the price push towards $1.30, but if it is unable to do so, ADA could drop back towards $1.20.