The Cardano price continued to drop during the ongoing session as sellers look to push ADA towards $1.15. ADA had registered a sharp drop on Wednesday, falling to $1.22. However, the price recovered on Thursday, rising to $1.28, but fell back in the red on Friday, falling by nearly 6% and settling at $1.20. The price continued to drop on Saturday, as the price slipped below $1.20, dropping to $1.18.

The Cardano price had started the previous weekend on a fairly bullish note, rising by over 5%, pushing above the 20-day SMA, and settling at $1.37. However, the price fell back in the red on Sunday, registering a marginal drop. ADA started Monday with the bearish sentiment persisting, as it slipped back below the 20-day SMA, falling to $1.32. ADA remained in the red on Tuesday, falling by 0.83%, before dropping by over 6% on Wednesday and falling to $1.22. 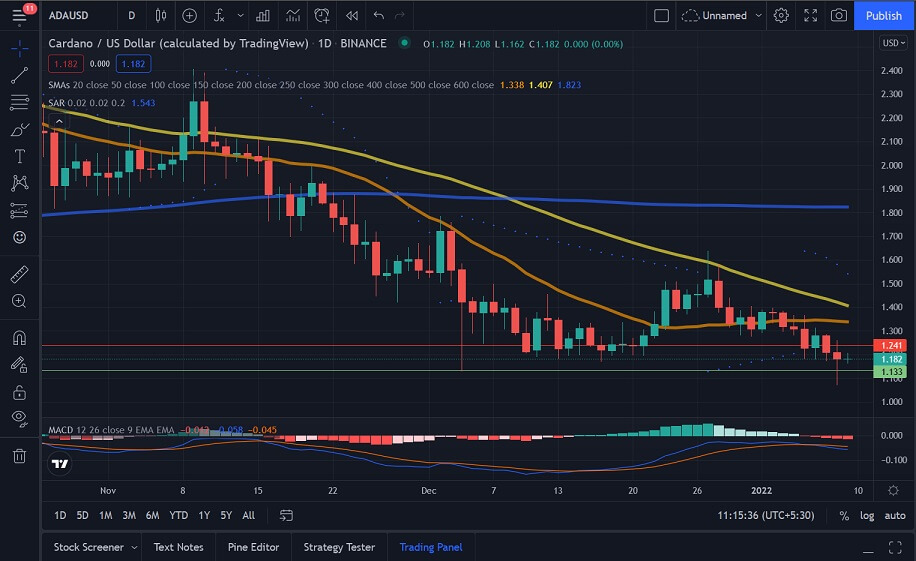 Looking at IntoTheBlock’s IOMAP for the Cardano price, we see that ADA faces strong resistance at around $1.24. At this price level, over 238,000 addresses have sold more than 4.2 billion ADA.

The 4-hour Cardano price chart shows us that ADA had registered a sharp drop on the 5th when it fell to $1.25. The price continued to drop from this level, falling to $1.20 on the 6th. ADA was able to stay at this level for the next few sessions before recovering and moving to $1.28. At this level, the 20-bar SMA was acting as resistance, and ADA fell back to $1.20. ADA maintained its level before rising to $1.23 on the 8th. However, once again, ADA could not move past the 20-bar SMA and registered a drastic fall, dropping to $1.14, before recovering and moving to its current level of $1.17.

We can see that buyers and sellers are struggling to control the current session, with the MACD and Parabolic SAR both currently bearish, indicating a drop in price. 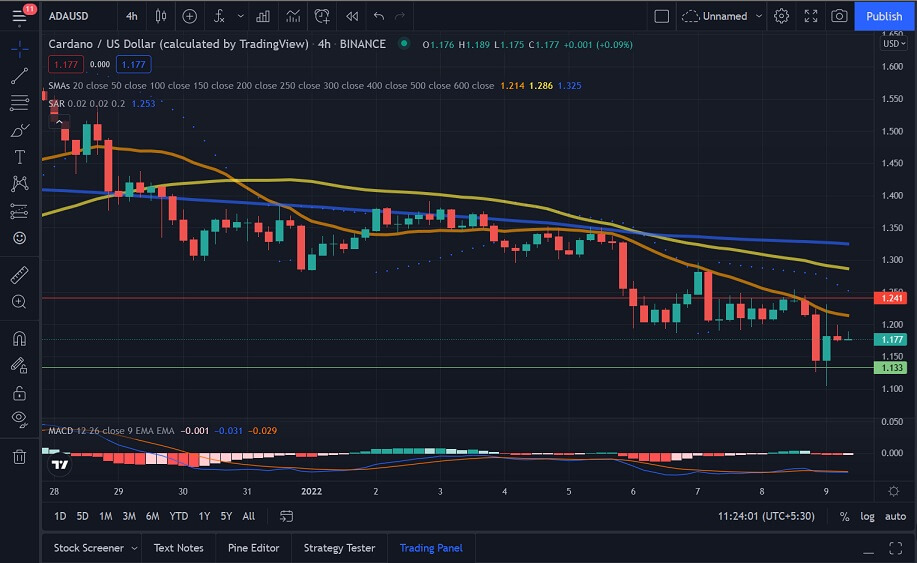 SundaeSwap Labs, the team behind SundaeSwap, which calls itself “the sweetest decentralized exchange on Cardano,” told its community about “some of the expected operational constraints and limitations that the blockchain and the DEX will exhibit on opening day and through the first few weeks after launch.”

Earlier, the SundaeSwap team announced that they had gone live on Cardano’s public testnet, which prompted Cardano founder Charles Hoskinson to invite members of the Cardano community to “go get some ice cream.”

In a recent blog post, SundaeSwap Labs noted that they could “expect a very exciting announcement in the next few days,” which has to be related to the upcoming mainnet launch (likely to occur later this month). The SundaeSwap team then tried to set expectations of the Cardano community ahead of the launch of the Cardano-powered DEX on the mainnet.

They pointed out that during their testnet launch event, they “noticed a large backlog in processing user actions." This was “partially due to continued improvements to the Scooper order batching program, but was more due to the current maximum throughput parameters of the Cardano blockchain.”

Although they admit this is likely to negatively impact the user experience, they point out that congestion is a sign of the Cardano network operating as intended by gradually applying backpressure.

Due to the huge amount of interest in the project from the Cardano community, the SundaeSwap team is expecting “a large backlog on mainnet as well." The project wants their users to be aware that although orders may take days to process,” they can rest assured that “everybody’s orders will be processed fairly and in the order, they were received and executable.”

The Cardano price chart shows us that ADA has been extremely bearish through the week. The current session sees ADA at $1.17, with the price continuing to drop. If the current sentiment persists, we could see ADA drop below $1.17.