Cardano Technical Analysis: ADA Could Slip Below $1.30 As Selloff Continues

The Cardano price continued to remain bearish on Monday, as sellers look to push ADA below $1.30. ADA has been bearish since Friday, when the price had dropped by almost 10%, falling to $1.55. The weekend saw the bearish sentiment continue, as the price dropped by 8.66% on Saturday and then by nearly 3% on Sunday, ending the weekend at $1.38. The current session sees ADA at $1.30, with sellers looking to push the price further down.

The Cardano price was quite positive over the previous weekend, rising by 0.54% on Saturday and over 3% on Sunday to end the weekend at $1.59. Monday saw ADA push up marginally to $1.60, but the price fell back on Tuesday, as it dropped to $1.55 after registering a drop of almost 3%. ADA remained in the red on Wednesday, registering a marginal fall, but rose by over 11% on Thursday and settled at $1.72. 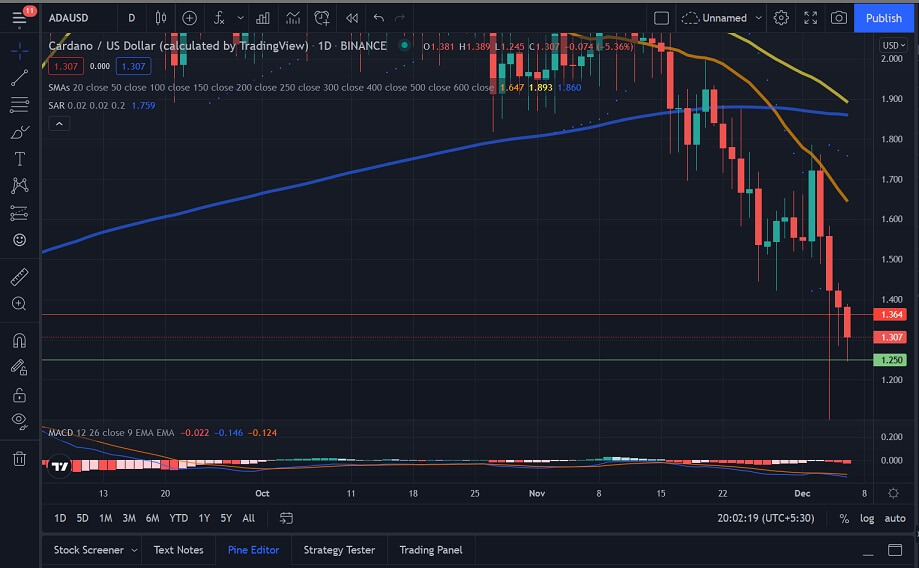 After rising over 11% on Thursday, the Cardano price fell back on Friday, dropping by over 9%, thanks to the 20-day SMA acting as resistance. ADA settled at $1.55 on Friday before registering a fall of over 8% on Saturday and dropping to $1.42. Sunday saw the bearish sentiment continue, with ADA dropping by almost 3% and ending the weekend at $1.38. The ongoing session sees ADA down by over 6%, as the price dips below $1.30.

Looking at IntoTheBlock’s IOMAP for the Cardano price, we see that ADA faces strong resistance at around $1.36. At this price level, over 128,000 addresses have sold more than 3 billion ADA.

Looking at the 4-hour Cardano price chart, we see that ADA pushed above the 20-bar SMA on the 29th, rising to $1.59. With the 20-bar SMA now acting as support, ADA stayed at this level for the next few sessions before slipping back below the 20-bar SMA and settling at $1.53 on the 2nd. ADA made a significant push from this level, moving above the 20 and 50-bar SMA and rising to $1.72. However, after reaching this level, the price turned bearish and dropped to $1.33 after slipping below the 20 and 50-bar SMA. The price pushed up to $1.43 but fell back to its current level of $1.29. 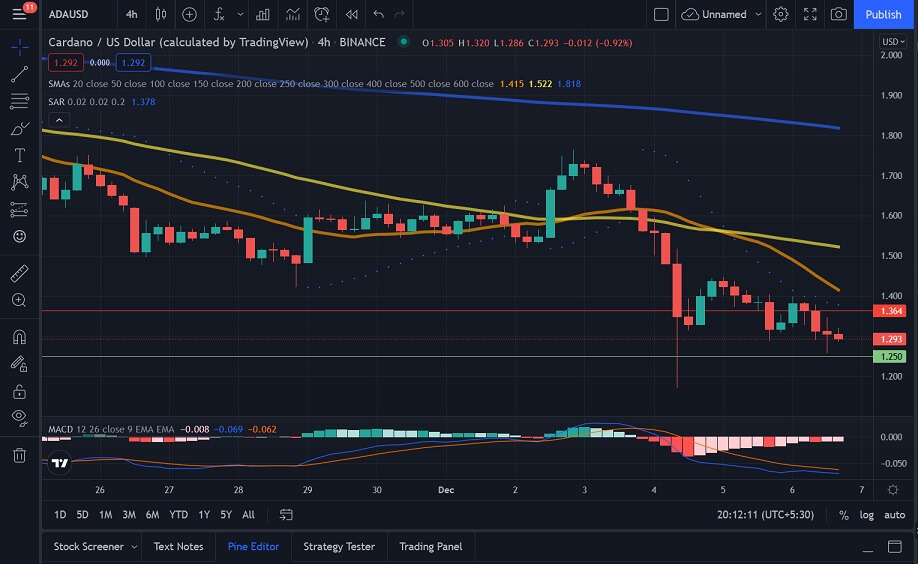 Despite facing consecutive weeks of a price drawdown, Cardano officially hit over 1,000,000 wallets which are currently staking ADA. With more crypto users quickly realizing the perks that come with staking and the dangers of actively trading the volatile industry, most of them are now turning to stake.

Since the launch of smart contracts on the Cardano mainnet on September 12th, the Cardano blockchain has gained a lot of traction. Cardano is also fast carving out an edge for itself as the go-to network with the capabilities to support various types of dApps across various industries, including finance, healthcare, education supply chain management, etc.

To this end, the Cardano team, led by Charles Hoskinson, has been on various tours across the globe, inking deals that are already seeing Cardano set up for use cases in these industries. In addition to having these features, the most attractive capability by the Cardano blockchain is its proof of stake consensus algorithm.

PoS enables users to stake or commit their coins to support the blockchain network and confirm transactions in exchange for rewards. With the introduction of “Goguen” during the Alonzo upgrade, a feature that adds the ability to build decentralized applications (DApps) on Cardano’s solid foundation, the POS staking feature has become a key highlight in Cardano’s roadmap, attracting more adopters seeing ADA’s price surge by over 1400% in 2021.

The Cardano price chart shows us that ADA had been extremely bearish over the weekend, with the price having slipped below $1.30 during the ongoing session. If the current sentiment persists, we could see ADA drop to $1.25, where the price has support.