The Cardano price failed to recover during the current session, as sellers managed to push the price below the 200-day SMA. ADA has been bearish the entire week, as the price slipped below the 20-day SMA on Monday. Tuesday saw ADA fall by over 7%, dropping to $1.87, where the 200-day SMA acted as support. The price posted a marginal recovery on Wednesday but fell back during the current session, with sellers firmly in control.

The Cardano price was quite bullish at the start of the previous week, as it pushed up by over 5% on Monday, pushing above the 20-day SMA and settling at $2.12. Tuesday saw the bullish sentiment continue, as ADA pushed above the 50-day SMA and settled at $2.27. On Wednesday, the price fell back in the red, falling by over 7%, slipping below the 50-day SMA, and settling at $2.10. The bearish sentiment persisted on Thursday and Friday, as ADA dropped by 0.92% and 1.65%, respectively, to settle at $2.04 at the end of Friday. With the 20-day SMA coming into play as support, the price pushed up marginally on Saturday, rising by 0.24%. 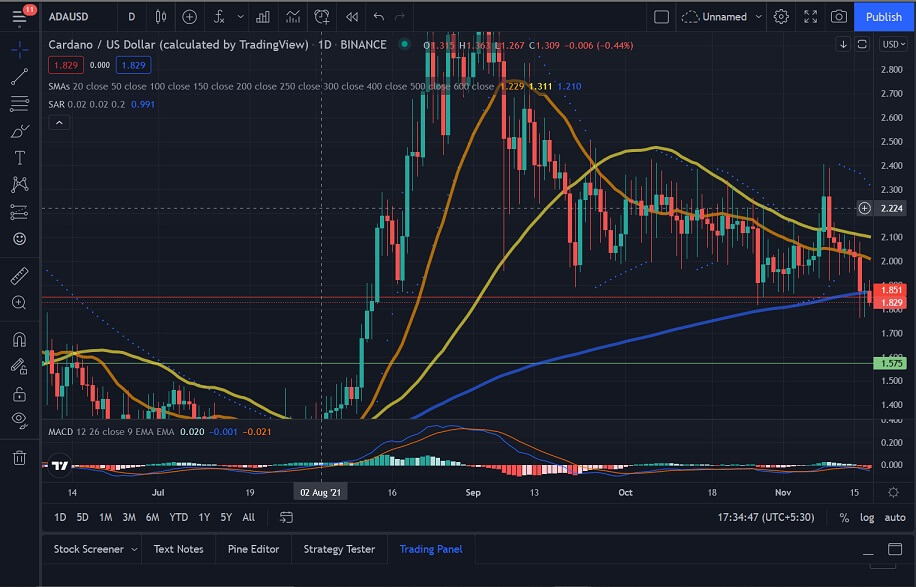 After posting a marginal recovery on Saturday, the Cardano price fell back on Sunday, falling by 0.57% and ending the weekend on a bearish note. ADA continued to drop on Monday as it slipped below the 20-day SMA and settled at $2.01. Tuesday saw a significant drop in price for ADA as sellers pushed the price down by over 7%, as ADA dropped to $1.87. The price could only manage a marginal recovery on Wednesday before falling back on Thursday, with the price slipping below the 50-day SMA. Currently, ADA is down by over 3% and could drop further.

We can see that the MACD has flipped to bearish, indicating that we could see ADA drop further.

Looking at IntoTheBlock’s IOMAP for the Cardano price, we see that ADA faces strong resistance at around $1.84. At this price level, over 106,000 addresses have sold more than 2.9 billion ADA.

The 4-hour Cardano price chart shows us that ADA had dropped to $2.20 on the 10th. ADA posted a marginal recovery from this level but turned bearish as the price slipped below the 20-bar SMA and settled at $2.10. ADA pushed up from this level, but with the 20-bar SMA acting as resistance, the price dropped below the 50 and 200-bar SMAs. With the two SMAs acting as strong resistance, ADA could not push beyond this level until the 15th, when it pushed above the 20-bar SMA. However, the price fell the next session, dropping to $1.82 before pushing up to $1.88. Currently, we can see that ADA is at $1.83.

Looking at the RSI, we can see that if the price drops any further, we could see it slip below the neutral zone, after which we could see the price recover. 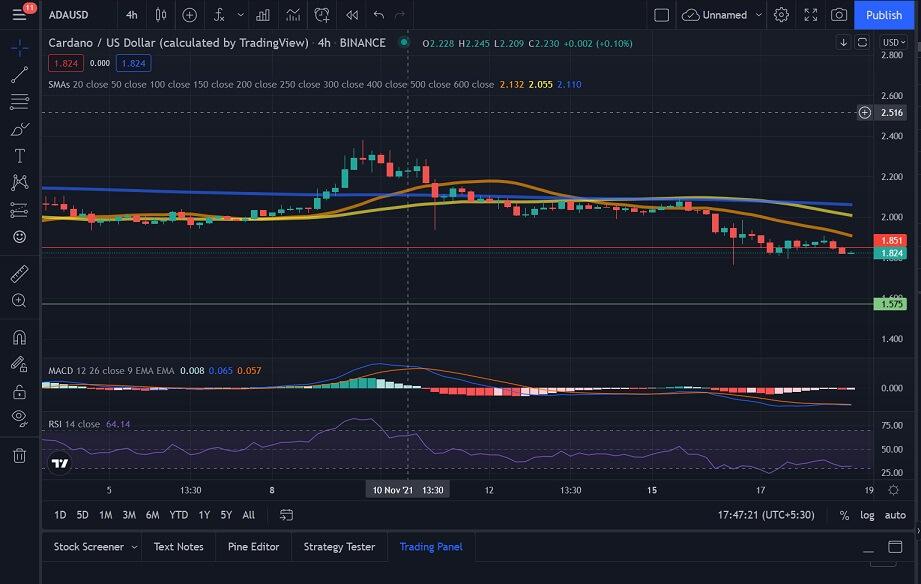 Cardano Has 2X The Transaction Volume Of Ethereum

Cardano’s price and on-chain volume exploded earlier this year after the network underwent its Alonzo hard fork, part of its “Gogen” era named after Joseph Goguen, an American professor of computer science from the University of California and the University of Oxford. The Goguen era came after the Shelley phase, in which Cardano became a decentralized blockchain and community members became validators.

The Alonzo hard fork brought in smart contracts, allowing ADA to compete with alternatives like Ethereum, the Binance Smart Chain, and others for decentralized finance (Defi) applications and non-fungible tokens (NFTs).

Per earlier reports, ADA addresses staking the cryptocurrency has grown by over 100,000 in just two months as more investors are betting on the token and its ecosystem. Crypto investment products recently saw inflows of $151 million last week, making it the 13th-consecutive week of inflows the market has seen. In total, a record $9 billion has been invested in these products, leading assets under management to a new high above $83 billion.

Looking at the Cardano price chart, we see that ADA has fallen during the current session, with the price currently down by over 2%. If the current sentiment continues, we could see ADA slip below $1.80.