The Cardano price registered a significant increase during the current session, with the price up by over 9%. ADA has been quite bullish lately and had registered an increase of nearly 11% on Thursday. However, on Friday, the price fell back by over 5% and settled at $1.39. The weekend saw ADA recover, rising by over 4% and settling at $1.45, before registering a marginal increase on Sunday. The current session has seen ADA surge, with the price going past $1.50

The Cardano price was quite bullish over the previous weekend, registering an increase of almost 2% on Saturday and a marginal increase on Sunday to settle at $1.24. The price fell back on Monday, registering a marginal drop, before rising by over 3% on Tuesday and settling at $1.28. Wednesday saw ADA continue to push up, as the price rose by 3.67% and settled at $1.32, just above the 20-day SMA. 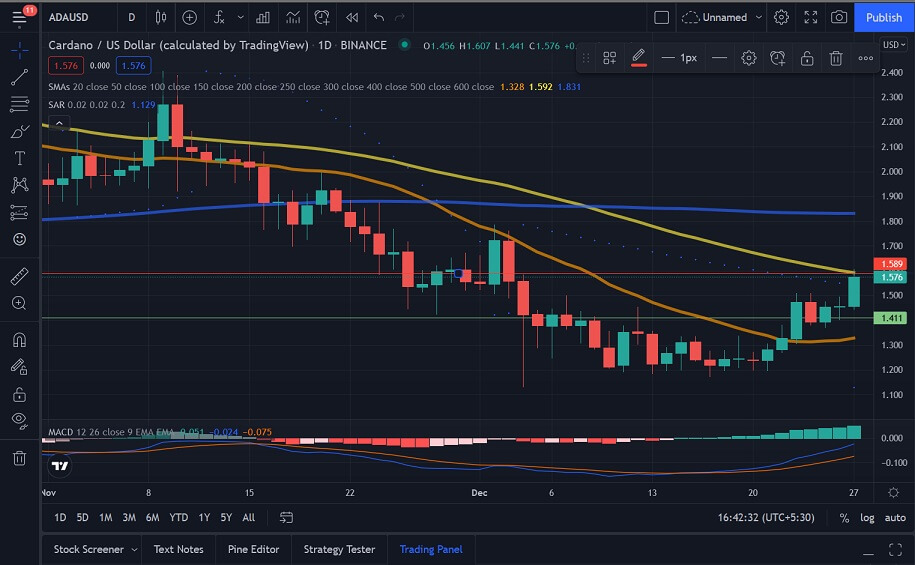 After rising to $1.32 on Wednesday, the Cardano price registered a significant increase on Thursday, rising by nearly 11% and settling at $1.47. Despite the bullish sentiment, the price fell back on Friday, falling by over 5% and dropping to $1.39. ADA made a strong recovery over the weekend, as it rose by 4.30% on Saturday and then registered a marginal increase on Sunday to end the weekend at $1.45. The current session sees buyers firmly in control, with the price up by over 8%.

We can see that the Parabolic SAR has flipped to bullish, indicating that the price could push up further.

Looking at IntoTheBlock’s IOMAP for the Cardano price, we can see that ADA has strong support at around $1.41. At this price level, over 170,000 addresses have bought more than 3.3 billion ADA.

We can see that the MACD and Parabolic SAR are both bullish, indicating that the price could push further. 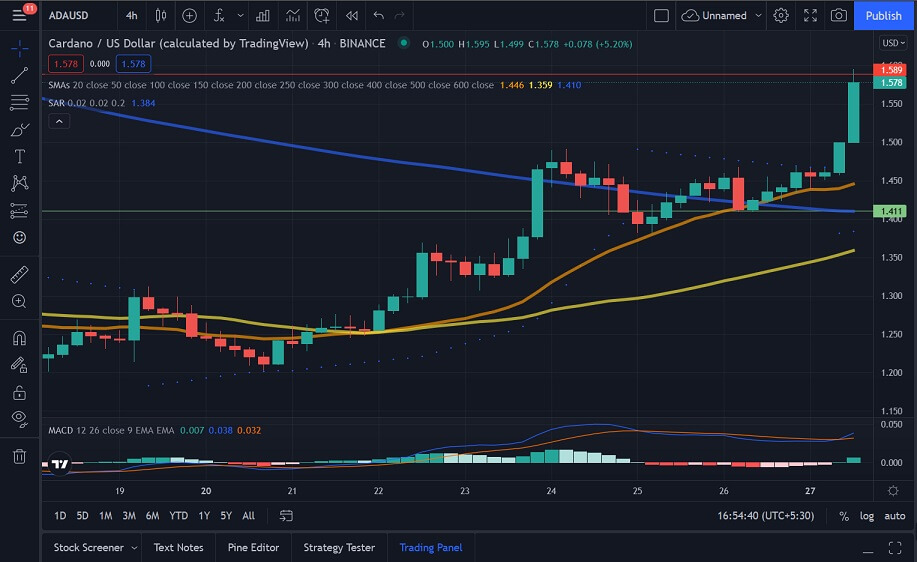 IOHK, the team behind Cardano, recently shared the blueprint for users to handle conversations about the network. The primer covered the essence of the network, its native token, and wallets. According to the blog post, IOHK wittingly advised users to keep away from cryptocurrency conversations but notes that it is almost inevitable for the topic not to make an appearance.

“Certainly, we’d advise putting the phone down and switching off from the crypto craziness that will still be waiting for you when you return. But should you find yourself cornered at the hearth by some crypto-curious relatives who just need to know about ADA, and Cardano, and blockchain, and all that, well, this is how the tale goes.”

The post introduced Cardano as the digital ledger using ADA as a native currency that embodies the tenets of decentralization, unlike traditional banking institutions. They add that the network is taking giant steps toward being fully decentralized with all decisions being taken by the community members.

To ensure trust in the system, Cardano uses the Ouroboros protocol, which is named after the ancient symbol of eternity. In addition to its purely decentralized outlook, IOHK observes that Cardano shot to fame in the light of Bitcoin’s environmental woes. Cardano was fondly called the “greenest coin,” and Charles Hoskinson once remarked that the network utilized less than 1% of Bitcoin’s energy consumption.

New blocks on the network are created by stake pools which are the heart of the Cardano network. ADA, the native token, was named after British mathematician Ada Lovelace and can be staked by users to get regular rewards.

Looking at the Cardano price chart, we see that ADA has been extremely bullish during the ongoing session. It does face stiff resistance at around $1.60, so we could see ADA test the resistance levels. If it is unable to move past this level, ADA could drop to $1.50.