Cardano Technical Analysis: Can ADA Push Back Above $1.10

The Cardano price managed to push above $1.07 during the ongoing session, as buyers gradually push the price higher. ADA had registered a significant increase on Wednesday but dropped back on Thursday, falling by over 3% and settling at $1.04. However, the price recovered on Friday, rising by 0.48% and then rising by 1.05% on Saturday, moving to $1.06. The current session sees ADA up by over 1%, as it moved above $1.07.

The Cardano price was extremely bearish over the previous weekend and had registered a drop of over 11% on Friday, falling to $1.12. The price continued to drop on Saturday, falling by 4.46%, before recovering on Sunday and rising over 5% to end the weekend at $1.12. ADA was back in the red on Monday, as it dropped by 5.24%, falling to $1.06, before dropping further on Tuesday and settling at $1.04, after falling by over 2%. 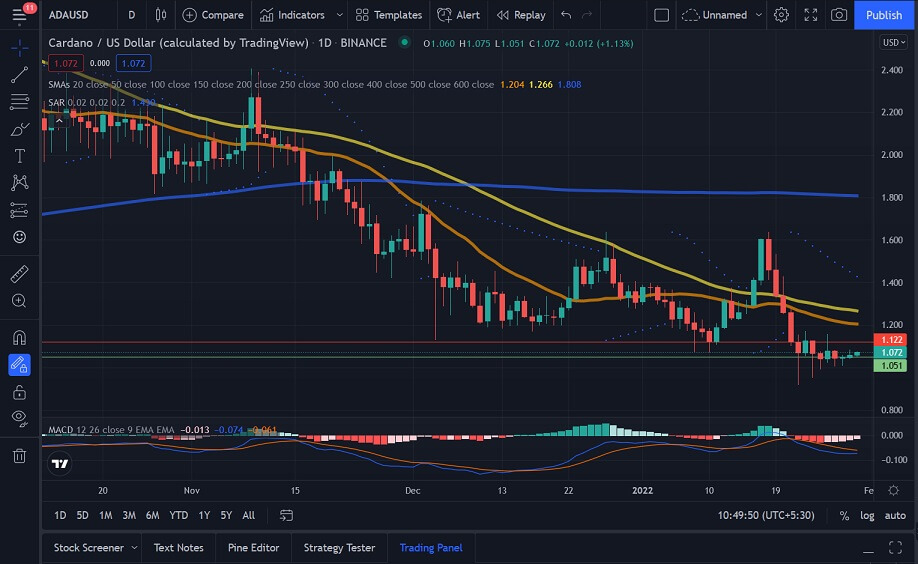 After dropping to $1.04 on Tuesday, the Cardano price managed to recover on Wednesday, rising by 3.36% and moving to $1.07. However, ADA was back in the red on Thursday, falling by over 3% and settling at $1.04, before registering a marginal increase on Friday, rising by 0.48%. ADA remained in the green over the weekend, registering an increase of 1.05% on Saturday and moving to $1.06, and is presently up by 1,13% in the ongoing session, as buyers look to push the price higher.

Looking at IntoTheBlock’s IOMAP for the Cardano price, we can see that ADA has strong support at around $1.05. At this price level, over 162,000 addresses have bought more than 4.4 billion ADA.

We can see that the MACD is currently bullish, and if ADA can push higher from this level, we could see the Parabolic SAR also flip to bullish. 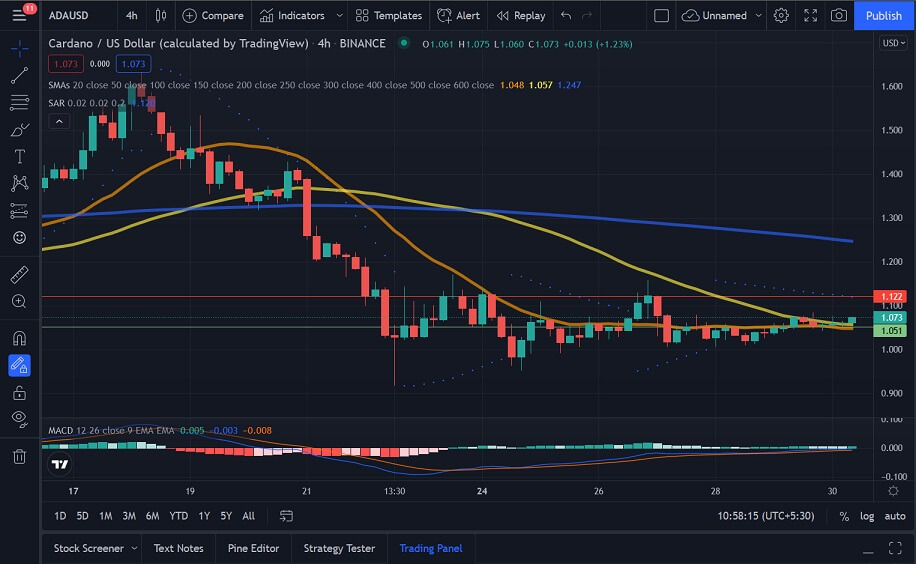 The average blockchain load on the Cardano (ADA) network has consistently been above 90% over the last few days as decentralized finance (DeFi) applications on the cryptocurrency’s network keep gaining steam.

According to Cardano blockchain insights shared on Google’s Data Studio, the network load started surging between January 14 and 15. This was weeks after the launch of the network’s first usable DeFi application MuesliSwap, which went live after conducting an under-the-radar offering and got to over $1 million in total value locked in two days.

The network’s blockchain load seemingly started surging ahead of the launch of SundawSwap, a “native, scalable decentralized exchange and automated liquidity provision protocol.” The exchange is backed by cFund, Alameda Research, and Double Peak Group.

In total, DeFiLlama data shows DeFi on Cardano is currently close to having $75 million of total value locked. In comparison, $117 billion is locked on Ethereum and $7.7 billion on Solana.

CryptoCompare’s recent report showed that in December, the number of addresses holding ADA grew to a new all-time high of four million. The report detailed the 4 million figure includes a significant decline in the number of traders holding the asset, which plunged 29.4% from 981,000 to 692,000. Long-term holders, the report adds, grew 5.78% to 279,000 last month.

Looking at the Cardano price chart, we see that ADA has managed to recover over the past few sessions. If the current sentiment persists, we could see ADA push above $1.07 and settle at around $1.08.