Ethereum Price Analysis: ETH Back In The Red After Pushing Above $3800

The Ethereum price started the previous weekend on a positive note, rising by 1.24% on Saturday. However, the price fell back on Sunday, dropping to $4065. The price continued to drop on Monday, falling by 0.69% and settling at $4037. ETH remained in the red on Tuesday, falling by over 6%, slipping below the 20-day SMA and settling at $3792. The price continued to drop on Wednesday as ETH’s bearish run continued, with the price dropping to $3630, dropping by over 4%. 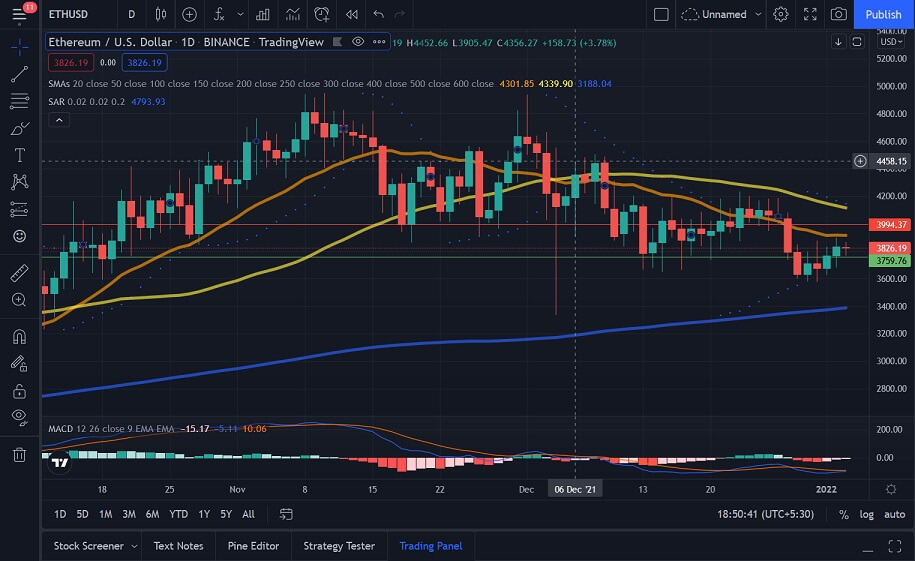 After dropping to $3630 on Wednesday, the Ethereum price recovered on Thursday, rising by over 2% and settling at $3710. The price fell back on Friday, dropping by 0.97% and falling to $3674. The weekend saw ETH post a strong recovery, with the price rising by 2.53% on Saturday, moving to $3767. ETH continued to push higher on Sunday, ending the weekend on a positive note at $3831 before registering a marginal drop during the current session.

IntoTheBlock’s IOMAP for the Ethereum price shows us that ETH faces strong resistance at around $3993. At this price level, over 1.5 million addresses have sold more than 12 million ETH.

We can see that the MACD and Parabolic SAR are both bullish, indicating that the price could recover from its current level. 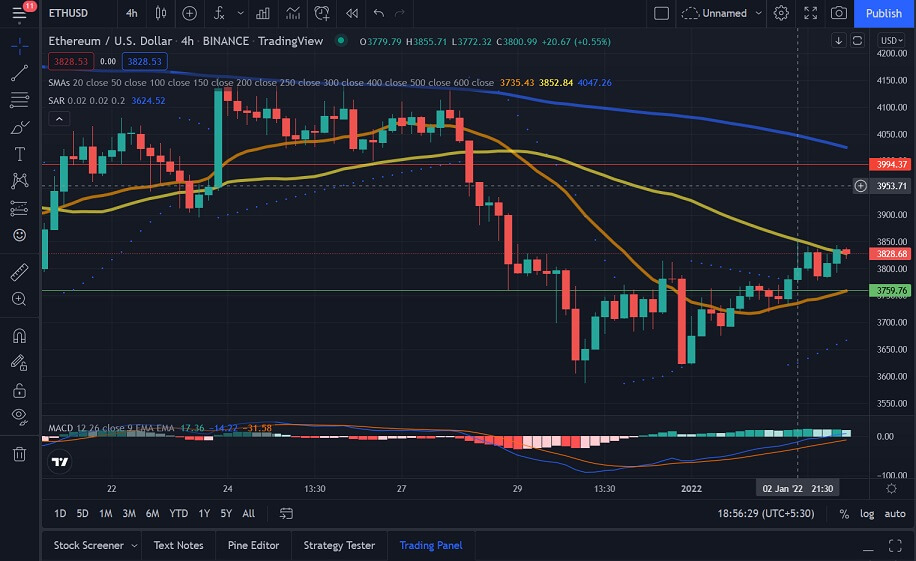 Ethereum co-founder Vitalik Buterin recently revisited some of the things he predicted over the last ten years. He also shared what he learned and what he thinks about them now.

Before launching Ethereum in 2015, Buterin was bullish on Bitcoin. He even wrote an article in July 2013 explaining the “internationality and censorship resistance” of Bitcoin. He noted that BTC can protect the purchasing power and wealth of citizens in many developing countries.

The Ethereum co-founder said in a Twitter thread that he visited Argentina last week, and he noticed that crypto adoption was high but stablecoin adoption was higher as businesses use USDT for their operations.

"Last week, I actually went to Argentina! My verdict: generally correct. Cryptocurrency adoption is high but stablecoin adoption is really high too; lots of businesses operate in USDT. Though, of course, if USD itself starts showing more problems this could change."

Buterin then reflected the negative impact of Bitcoin regulation he predicted about ten years ago. At the time, the programmer argued that “Bitcoin is resisting the government not by being clever about what legal category it is in, but rather by being technologically censorship-proof.”

The Ethereum co-founder recalled how he was briefly an apologist for PoW energy waste in 2012. However, he became excited when he learned about proof of stake as a promising alternative in 2013. and he bought the idea by 2014. Buterin tagged his transition as a broader intellectual evolution.

Buterin also highlighted his predictions about the timeline of Ethereum’s PoS and Sharding while admitting that they were wrong and laughable. He also noted that underestimating the complexity of software development was his main mistake.

Looking at the Ethereum price chart, we can see that ETH has registered a marginal drop during the ongoing session. If sellers retain the session, we could see ETH drop back below $3800. However, if buyers retake the session, ETH could move to $3900.