Ethereum Price Analysis: ETH Continues To Drop As Sellers Look To Push It Below $4200

The Ethereum price started the current week in the red, with sellers looking to push ETH below $4200. ETH had dropped below the 50-day SMA and $4000 on Thursday, with the price dropping to $3998. However, ETH made a strong recovery on Friday, rising by over 7% and settling at $4299. Saturday saw ETH continue to push up, rising to $4416, before dropping back on Sunday and finishing the weekend at $4262.

The Ethereum price was quite bearish during the previous weekend, as ETH dropped by 0.48% on Saturday and 0.44% on Sunday to end the weekend at $4625. Monday saw ETH remain in the red, as the price registered a drop of 1.33% and settled at $4563. Tuesday saw a significant drop, as ETH fell by over 7%, slipping below the 20-day SMA and settling at $4212. Despite the bearish session on Tuesday, ETH recovered on Wednesday, as it pushed up by almost 2% and settled at $4288. 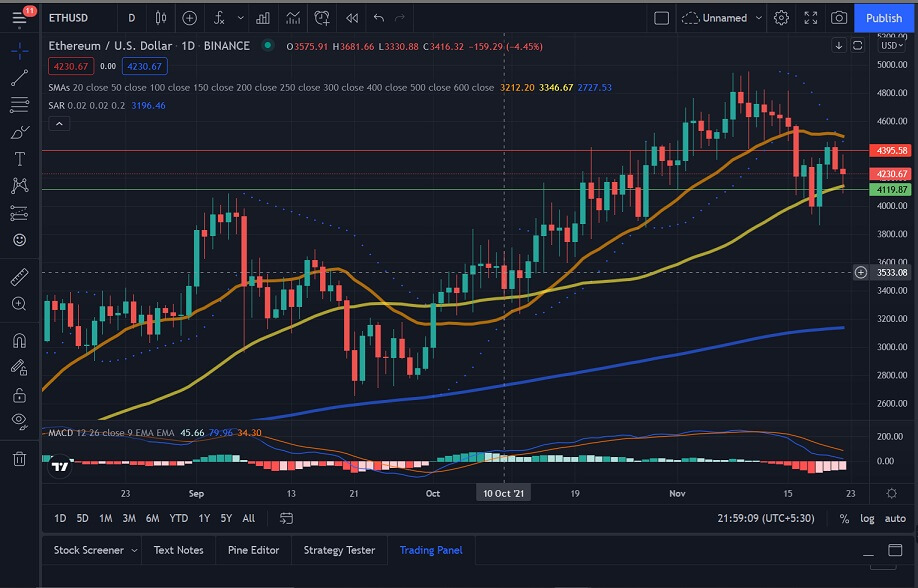 After posting a recovery on Wednesday, the Ethereum price fell back on Thursday, as the price fell by almost 7%, slipping below the 50-day SMA and settling at $3998. However, ETH recovered on Friday, pushing back above the 50-bar SMA and settling at $4299 after registering an increase of 7.52%. The price continued to push up on Saturday, rising to $4416, but fell back on Sunday, registering a drop of 3.50% and settling at $4262. The current session sees ETH still in the red, with sellers looking to push the price to $4200.

The Parabolic SAR is currently bearish, indicating that the price could drop further. However, if buyers can gain control and push the price higher, it could flip to bullish.

Looking at IntoTheBlock’s IOMAP for the Ethereum price, we can see that ETH faces strong resistance at around $4393. At this price level, over 774,000 addresses have sold more than 9.2 million ETH.

We can see that the MACD is currently bearish, indicating that the price could drop during the current session. However, if the price recovers and pushes higher, we could see it flip to bullish. 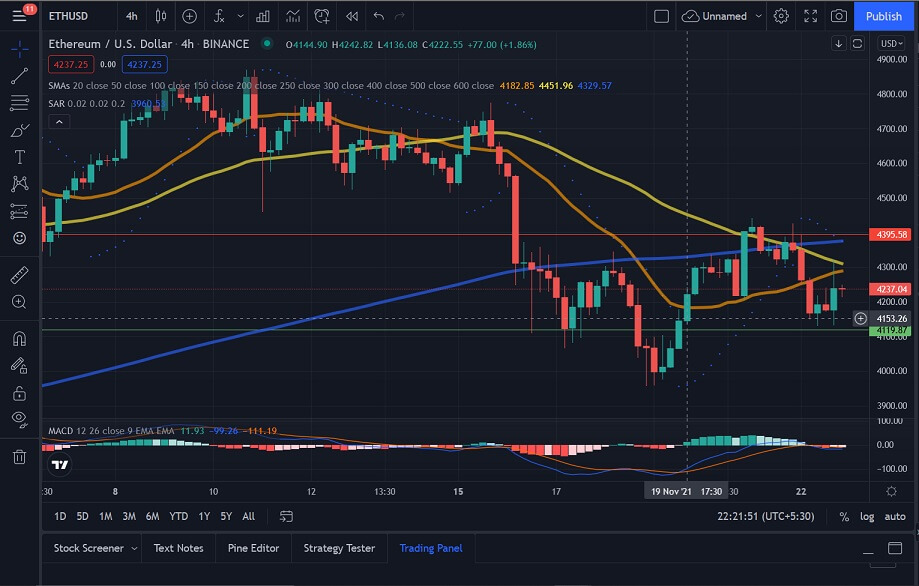 The impact of Ethereum's excessive fees, long confirmation times, and slow updates are starting to worry retail users, devs, and large investors. Faced with the difficulties of delivering a satisfactory user experience, Ethereum developers are beginning to move to rival blockchains.

Blockchains like Solana, Binance Smart Chain, and Avalanche have seen a significant rise during 2021, cementing themselves as more efficient alternatives to Ethereum and its upgrade to Proof of Stake that is not quite there yet.

According to Nicholas Merten, creator of the YouTube channel DataDash, Ethereum’s advantage of being the blockchain used by all is losing ground as time goes on. In a Twitter thread, Merten explained that the arguments in favor of Ethereum might not hold up over time. He believes that in the end, L2s (scalability solutions built on top of the original blockchain) is impractical and generate little incentive for adoption.

"L1 should be much cheaper. The cost reduction potential of rollups (L2) can’t be fully realized until more users move from L1 to L2.

We need major players in the space to sponsor the cost of bridging for existing users and reward programs for LPs who move to L2, etc."

For Merten, Ethereum developers should focus on making L1s (on-chain transactions) more efficient and less expensive. As smart contracts become more complex, people must pay more fees. He believes that Ethereum needs better marketing. In addition to technical developments, there should be a team capable of keeping the community together and excited.

This Australian Senator Is Bullish On DeFi

Senator Jane Hume recently stated that decentralized finance (DeFi) presents many opportunities for Australia to cement its place as a “front-runner for innovation and economic progress.” Senator Hume spoke at the Australian Financial Review Super & Wealth Summit, which was primarily about super and government retirement funds — both slow and steady investments.

Senator Hume called for industry and government to acknowledge that DeFi is “not a fad” and “not going away anytime soon.” She also referenced the fast-paced nature of the industry:

“If the last 20 or 30 years have taught us anything, it’s that all innovation begins as disruption and ends as a household name. Decentralized finance underpinned by blockchain technology will present incredible opportunities — Australia mustn’t be left behind by fear of the unknown.”

Speaking on policy, she noted that Australia’s economic future would be defined by innovation and technology as the country recovers from the financial toll of the pandemic.

She also commended industry players for “embracing innovation and developments in this space,” particularly around blockchain technology. According to a Finder’s Crypto Survey of 27,400 respondents, 17% of Australians invest in cryptocurrency. However, the country’s uptake of crypto has seen increasing pressure from lawmakers and regulatory bodies.

Looking at the Ethereum price chart, we see that ETH had dropped considerably on Sunday, with the price remaining bearish on Monday. If the current sentiment persists, we could see ETH drop to $4200.