The Ethereum price is currently down by nearly 11%, as the price slipped below $2500 with sellers controlling the market. ETH had registered a sharp drop on Friday, falling over 14% and settling at $2569. The weekend saw ETH remain in the red, dropping over 6% on Saturday and settling at $2413. Despite the bullish sentiment, ETH registered a significant recovery on Sunday, rising by 5.34%, before dropping back during the ongoing session. 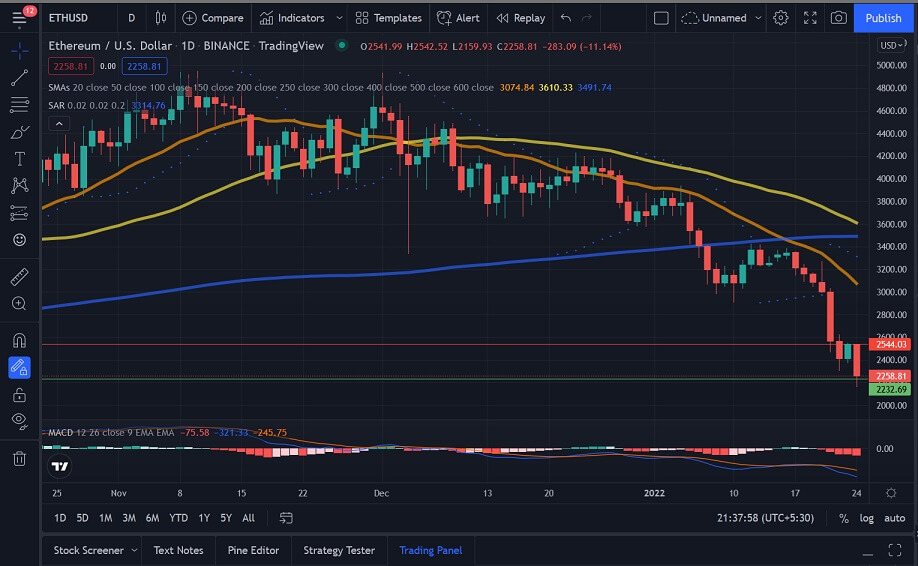 The Ethereum price remained firmly in the red on Thursday, as it dropped by nearly 3%, falling to $3000. Friday saw ETH slip below $3000, as the price crashed over 14%, dropping to $2569. The weekend started with ETH falling over 6% on Saturday, dropping to $2413, before recovering on Sunday and rising to $2541. The current session sees ETH down by nearly 11% as sellers look to drive the price lower.

Looking at IntoTheBlock’s IOMAP for the Ethereum price, we can see that ETH has strong support at around $2230. At this price level, over 359,000 addresses have bought more than 9.5 million ETH. 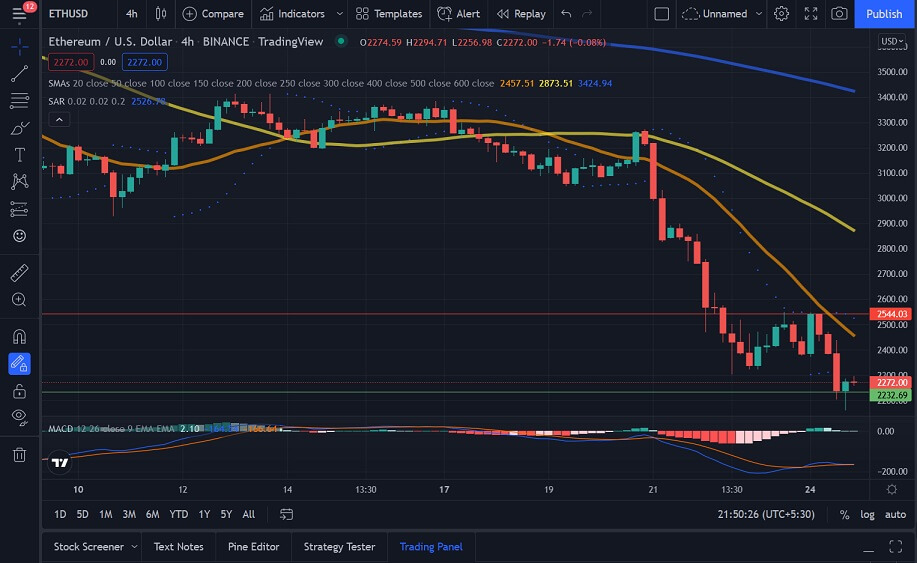 Ethereum Competitors Like Solana (SOL) and NEAR Set For ‘Immense Growth’ This Year: Pantera Capital

Digital asset investment giant Pantera Capital is giving a bullish outlook for Ethereum rivals like Solana and Near in 2022. In its recent letter to investors, Pantera partner Paul Veradittakit said that rival smart contract platforms are eating away the market share of Ethereum, which now accounts for just 63% of the total value locked (TVL) in decentralized finance (DeFi), down from 97% at the start of 2021.

Veradittakit says that Solana, which aims to be a faster and cheaper alternative to Ethereum, is particularly primed to grow in 2022 fueled by the increasing number of projects in its ecosystem.

“Solana, which offers unparalleled transaction throughput, saw an incredible 2021, reaching a peak TVL of $15 billion and a peak price of $260 in November versus $0.22 when it began trading in April 2020. Recent activity in the Solana community, including the launches of massive funds for decentralized social media and gaming, suggests that the ecosystem will continue to grow immensely in the coming year.”

Veradittakit says that Near is also set for explosive growth. In April, the platform launched the Rainbow Bridge that enables the transfer of crypto assets between blockchains.

“Bridges (which enable interoperability between vastly different networks), such as NEAR’s Rainbow Bridge, will help accelerate the growth of non-Ethereum ecosystems by expanding access to liquidity and allowing easier composability of digital assets. Ethereum virtual machine (EVM) platforms, like Aurora on NEAR, are also making it easier than ever for Ethereum-based DApps (decentralized apps) to launch on other chains, enhancing cross-chain engagement within DeFi.”

During the UpOnly podcast interview, Ethereum co-founder Vitalik Buterin shared his thoughts on various crypto updates. Buterin revealed the complexity of burning 90% of 500 trillion SHIB tokens. The SHIB coins were donated to Buterin, who donated 10% to the India Covid Crypto Relief Fund, which amounted to $1.2B at the time. He burned 90% of them (worth approximately $7B) at the time because he didn’t “want to be a locus of power of that kind.”

Buterin said that he had to buy a new laptop from Target to do the burn transaction. The funds he received from the SHIB founders were held in a cold paper wallet. He had to use the two numbers to get the private key. He said:

“One of those numbers was with me; the other was with my family in Canada.”

Furthermore, he generated an Ethereum transaction to send ETH to the charity. Of Ethereum, Buterin said that he sees it as a large part of his future. Vitalik said that Ethereum is still aiming for $0.05 per transaction and that rollups and sharding are the way forward concerning scaling without sacrificing security or decentralization.

He anticipates transaction costs to dip below $0.05 “within a couple of years.” He also said that progress on the ZK-rollup Ethereum Virtual Machine is going well and that most nodes won’t store a full chain.

A roll-up is a layer two solution on Ethereum, where transactions are executed off the main Ethereum chain, while transaction data gets posted on layer 1. The concept of sharding is borrowed from traditional databases and refers to the horizontal scaling of a database, similar to increasing the number of lanes on a highway to reduce congestion.

Looking at the Ethereum price chart, we can see that ETH has registered a sharp drop during the current session. There is strong support at around $2230, and ETH has made a marginal recovery, with the price expected to push to $2300.