The Ethereum price briefly pushed past $4400 during the ongoing session, as buyers looked to push the price back to pre-weekend levels. ETH had recovered on Sunday, as the price pushed up by almost 2%. Monday saw ETH continue to push up, as it moved above the 20-day SMA and settled at $4356 after registering an increase of 3.66%. However, with the 50-day SMA acting as resistance, the price fell back on Tuesday, dropping to $4310 before recovering during the ongoing session.

The Ethereum price started the previous week on a bullish note, pushing above the 20-day SMA on Monday and settling at $4449. ETH continued to push up on Tuesday, rising to $4635 but fell back after reaching this level, dropping by 1.07% on Wednesday. The bearish sentiment persisted on Thursday, as the price dropped by 1.48%, before a sharp fall of 6.54% pushed ETH below the 20 and 50-day SMAs to $4222 on Friday. 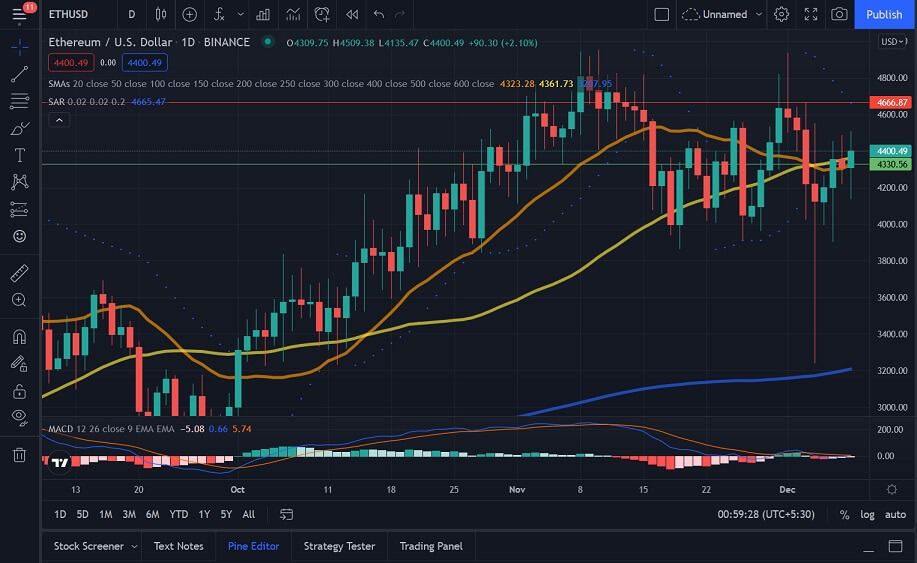 After dropping by over 6% on Friday, the Ethereum price continued to drop on Saturday, falling to $4125. However, the price recovered on Sunday, rising by almost 2% and settling at $4404. ETH continued to rise on Monday, pushing up to $4256 and above the 20-day SMA. However, ETH could not push above the 50-day SMA and dropped to $4310 on Tuesday. The current session sees ETH back above $4400, up by over 2%.

We can see that the Parabolic SAR is still bearish; however, if the price increases, we could see it flip to bullish.

Looking at IntoTheBlock’s IOMAP for the Ethereum price, we can see that ETH has strong support at around $4329. At this price level, over 1.9 million addresses have bought over 12 million ETH.

Looking at the 4-hour Ethereum price chart, we can see that ETH had pushed up to $4768 on the 1st. However, after reaching this level, the price fell back below the 20-bar SMA and settled at $4489. ETH could stay at this level for the subsequent few sessions before registering a significant fall, slipping below the 200 and 50-bar SMAs and dropping to $3874 on the 4th. ETH pushed up from this level, as the price rose to $4207 but fell back, dropping to $4048. ETH rose up again from this level, as the price pushed back above the 20-bar SMA to $4355. Here the 50-bar SMA was acting as resistance, and ETH was unable to push past this level until the 8th when ETH rose above $4400. 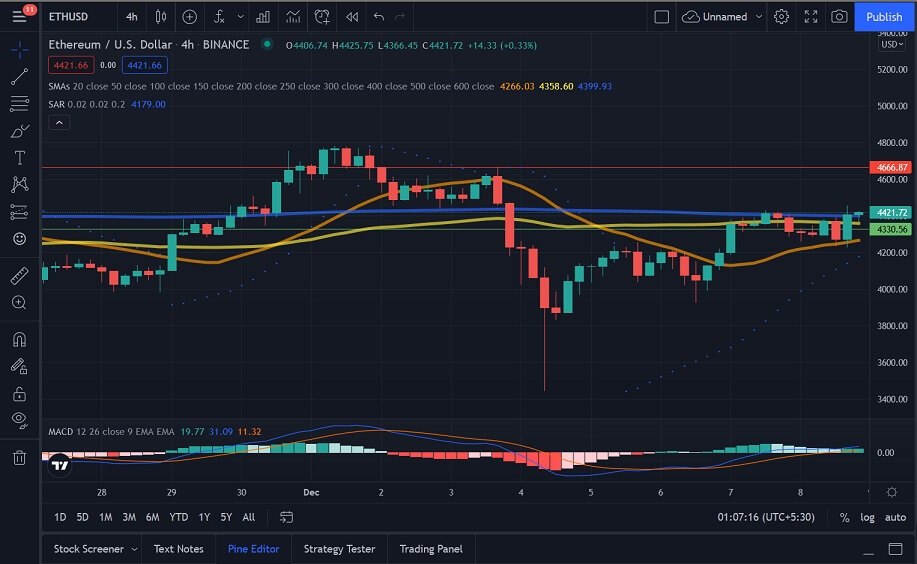 Three Arrows Capital holds a hefty amount of Ethereum, despite CEO Su Zhu’s negative claims on the cryptocurrency less than two weeks ago.

The rant, which came on November 21st, coincided with data on Etherscan showing that the address marked “Three Arrows Capital” on Nansen transferred 17,895 ETH (worth approximately $79.23 million) to the FTX, sending a signal that the firm would sell its holdings.

However, recent Etherscan data showed that around 91,477 ETH (about $400 million) were transferred this week from FTX, Binance, and Coinbase to the wallet marked by Nansen as Three Arrow Capital.

“Eth L1 still unusable for newcomers, show it to your grandma if you don’t, believe me, I’ll still bid it hard on any panic dump like this weekend obv 100k eth is dust for what it’s worth, more coming.”

Apart from making an attractive profit, according to sources, such transfers to a wallet could only mean one thing. Zhu’s firm is holding Ether with “no intention” of selling. Last month, Zhu meted out his frustrations at Ethereum, threatening that he was leaving the network.

In a tweet, he complained of how Ethereum had promised users a vision of the future, but “they have to to pay $100-1k per tx to enjoy it, and then get told some tales about how they should’ve been smart enough to buy ETH at $10.”

Last week, he and Elon Musk seemed to agree that Ethereum’s sky-high transaction fees on DeFi protocols were choking small investors, vouching for other low-fees networks. Despite Zhu presenting himself as one who would soon be dumping the second largest crypto asset, a more glaring question is, why would anyone sell an asset that has already made them such immense profit with nothing to lose.

The Ethereum price chart shows us that ETH has pushed up significantly during the week, as ETH made a strong recovery. If the current sentiment persists, ETH could push up towards $4500.