The Ethereum price looked to recover during the current session, as buyers pushed the price up marginally. ETH has been quite bearish since Friday. The weekend saw ETH remain in the red, as it dropped by 0.48% on Saturday, and 0.44% on Sunday, settling at $4625. ETH remained bearish on Monday, dropping by 1.33% on Monday before falling by over 7% on Tuesday, slipping below the 20-day SMA and settling at $4212. 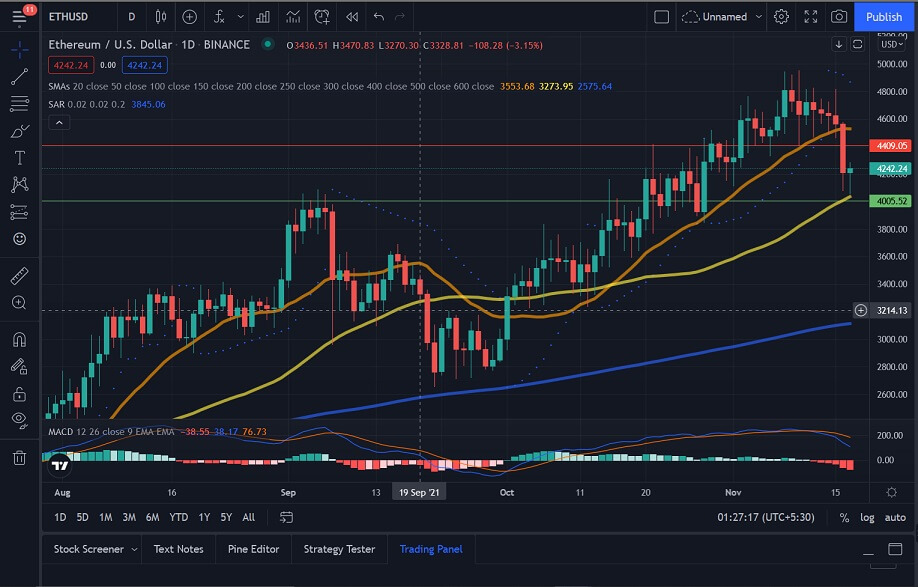 The Ethereum price continued to remain bearish over the weekend, as the price dropped by 0.48% on Saturday and by 0.44% on Sunday to end the weekend at $4625. Monday saw the bearish sentiment continue, as ETH dropped to $4563, settling just above the 20-day SMA. ETH slipped below the 20-day SMA on Tuesday, as the price fell by over 7%, dropping to $4212, before posting a marginal recovery during the current session.

We can see that the Parabolic SAR has flipped to bearish. However, if ETH makes a recovery during the current session, we could see it flip back to bullish.

Looking at IntoTheBlock’s IOMAP for the Ethereum price, we can see that ETH faces strong resistance at around $4410. At this price level, over 600,000 addresses have sold more than 8.8 million ETH.

We can see that the MACD is currently bearish, indicating that the price could drop. However, if the price recovers, we could see it flip from bearish to bullish. 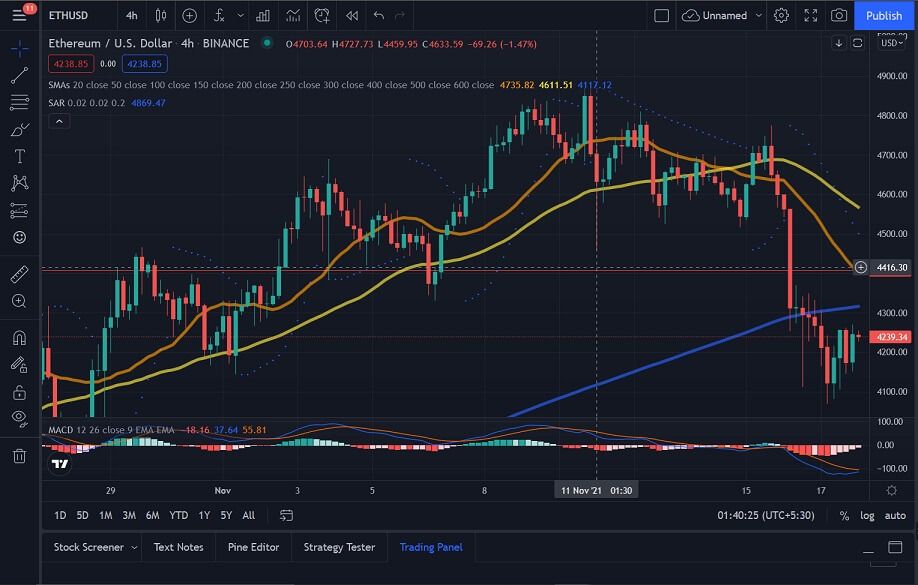 The recent update to Brave Browser (version 1.32) offers a native wallet for the Ethereum ecosystem. In a press release, the team announced Brave Wallet now allows its 40 million+ users to exchange assets and access decentralized apps (dApps) hosted on Ethereum Layer 2 solutions and other EVM-compatible sidechains like Polygon and xDai.

While most Web3 wallets are offered via extensions, Brave Wallet can be used directly within the browser and bypasses the need to download extensions. Brave’s built-in wallet will compete with popular Web3 wallets, including MetaMask, Trust Wallet, and Wallet Connect.

In the press release, Brave said a native crypto wallet would be useful in overcoming security and performance issues that are usually associated with browser extensions. Brave claimed that Web3 wallets used primarily as browser extensions might be more susceptible to thefts and other attacks.

In the past, users have reported losing funds to hackers through fake web extensions. By emulating popular wallets like MetaMask, hackers can trick users into entering their private keys. Explaining the features of native browser wallet, Brian Bondy, the CTO of Brave, said:

“The Brave Wallet requires no extensions and is instead browser-native, removing key performance and security concerns while preserving the core features of popular crypto wallets."

With the latest offering, Brave users can import their existing wallets from MetaMask or hardware wallets, such as Trezor or Ledger. The latest update also allows users to swap Ethereum-based tokens and provides historical market data via CoinGecko APIs in addition to a fiat onramp through a partnership with Wyre.

Looking at the Ethereum price chart, we can see that ETH had pushed up during the current session after registering a significant fall on Tuesday. If the current sentiment persists, we could see ETH push to $4300.