The Ethereum price registered a marginal recovery during the ongoing session, as buyers look to push the price towards $3200. ETH had started the week on an extremely bearish note, dropping over 4% on Monday and settling at $3212. The price continued to drop on Tuesday, dropping to $3161 on Tuesday and then falling by 2.39% to drop to $3085 on Wednesday, before recovering during the ongoing session. 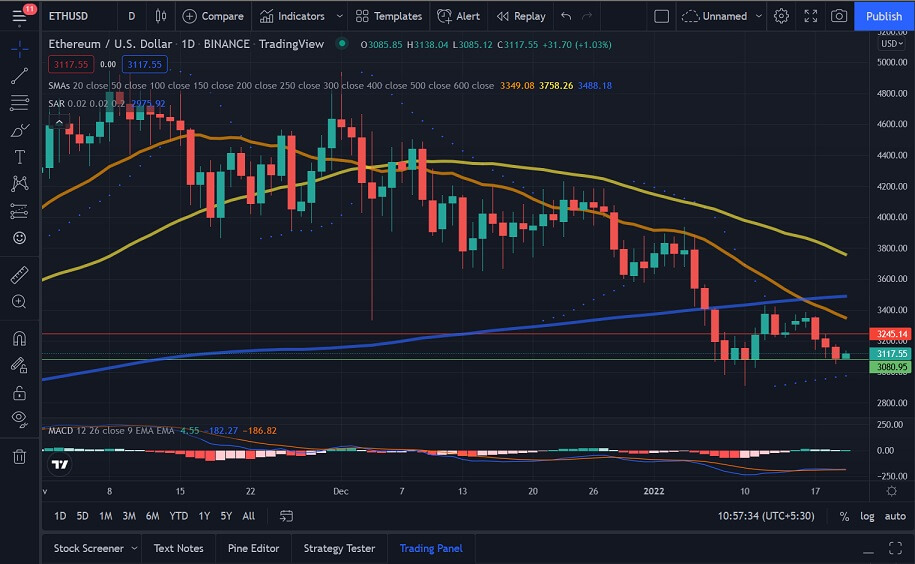 The Ethereum price continued to remain in the green over the weekend, rising by 2.22% on Saturday and then by 0.63% on Sunday to end the weekend at $3349. However, despite the positive weekend, the price fell back on Monday, dropping by 4.08% and settling at $3212. The price continued to drop on Tuesday, falling to $3161 and then dropping to $3085 on Wednesday, registering a drop of over 2%. The current session has seen a marginal recovery, and with the Parabolic SAR currently bullish, we could see the price push higher.

Looking at IntoTheBlock’s IOMAP for the Ethereum price, we can see that ETH faces strong resistance at around $3253. At this price level, over 1.3 million addresses have sold more than 2.2 million ETH. ETH also has support at $3079, where over 850,000 addresses have bought more than 1.6 million ETH.

The 4-hour Ethereum price chart shows us that ETH had risen to $3310 on the 14th, pushing above the 20-bar SMA. The price continued to push higher from this level, rising to $3362 on the 15th and then registering a marginal drop to $3316. ETH was able to stay at this level for the next few sessions thanks to the 20-bar SMA acting as support before slipping below the SMA on the 17th, falling to $3258. The price continued to drop from this level, slipping below the 50-day SMA and dropping to $3184 on the 18th. ETH remained bearish after reaching this level, falling to $3117 and then dropping to $3059 on the 19th, before rising and moving to its current level of $3123.

We can see that the MACD is currently bearish, but if ETH can recover from this level, we could see it flip to bullish. 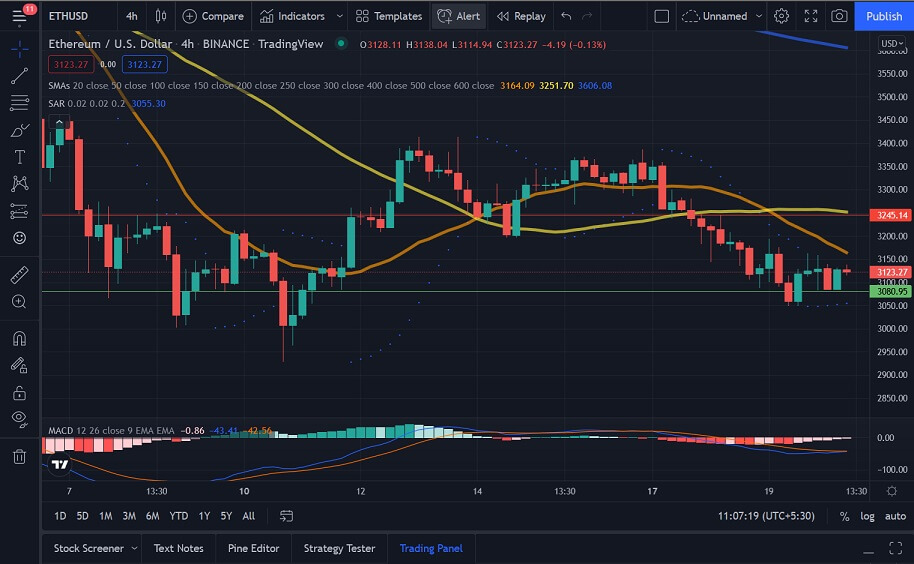 Microsoft recently announced that it would acquire publisher Activision Blizzard, the company behind Call of Duty and Warcraft, in a deal valued at $68.7 billion. Microsoft said that it is a move made in anticipation of the metaverse.

The metaverse is a term that describes a future vision of the internet, in which users interact with avatars across shared 3D spaces. It is envisioned as a more immersive way to socialize, play, and even work online. Blockchain technology and crypto assets (including NFTs) are expected to play a role as users move across interoperable platforms.

In a release, Microsoft said that the deal will provide “building blocks for the metaverse.” Chairman and CEO Satya Nadella added:

"Gaming is the most dynamic and exciting category in entertainment across all platforms today, and will play a key role in the development of metaverse platforms.”

Ethereum-based games like Decentraland and The Sandbox are seen as early examples of the metaverse, letting users purchase, customize, and even monetize digital land plots sold as NFT assets. Facebook has also signaled significant interest in the coming metaverse, revealing its vision last October as it renamed its parent company to Meta.

Activision Blizzard has yet to make a move in the NFT or metaverse spaces. Microsoft, meanwhile, announced in November that it is building 3D avatar support for its Teams virtual meeting platform and will create immersive environments for users to interact within.

Microsoft has also been involved in the crypto industry for years, announcing an alliance with Ethereum software technology company ConsenSys back in 2015.

Looking at the Ethereum price chart, we can see that ETH has registered a slight recovery during the ongoing session after a bearish week. If the current sentiment persists, we could see ETH rise towards $3150, but if sellers retake the session, ETH could drop to $3100.