The Ethereum price continued to reach new heights on Monday, breaking past $4800 and setting a new all-time high. ETH has been quite bullish since the weekend, as it registered an increase of 0.96% on Saturday. ETH continued to push up on Sunday, with the price rising by a further 2.06% and settling at $4615. ETH started the week on a very bullish note, with the price rising by over 4%, pushing beyond $4800 and settling at $4808.

The Ethereum price has been very bullish recently but started the previous weekend with a drop, as the price fell to $4324, before another fall on Sunday took the price to $4291. ETH started the week on a more positive note, as the price rose by0.73%, before surging by over 6% on Tuesday and settling at $4592. ETH registered a minor increase on Wednesday, as the price pushed above $4600 and settled at $4606. However, despite the prevailing bullish sentiment, the price dropped into the red on Thursday, falling to $4536. 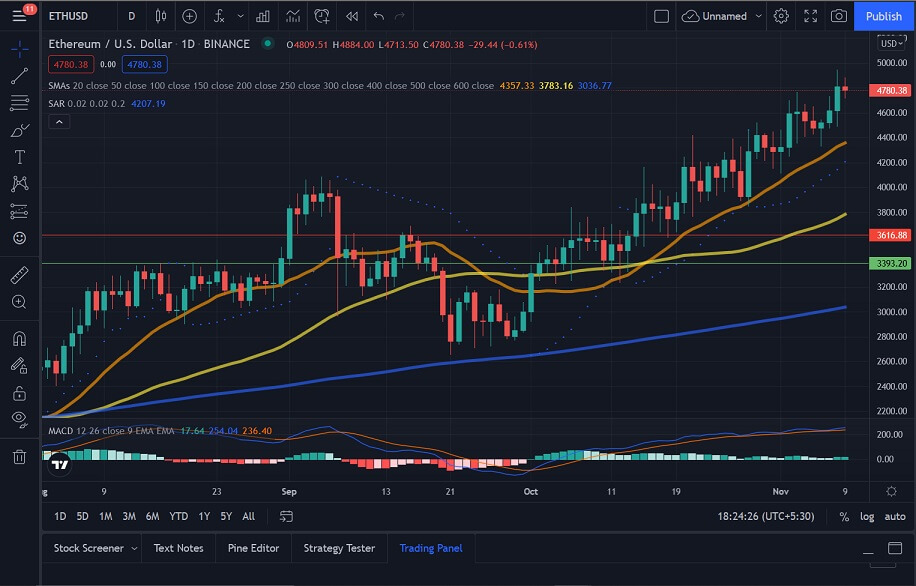 After falling to $4536 on Thursday, the Ethereum price fell further on Friday, as the price dropped to $4479, registering a drop of 1.26%. The price recovered over the weekend, as ETH rose by 0.96% on Saturday and then pushed up by over 2% on Sunday, settling at $4615. The current week too, started on a bullish note for ETH, as the price broke past $4800, moving up to $4809. ETH also set a new all-time high on Monday, as it hit an intraday high of $4943. The current session sees ETH back in the red as the price registers a marginal drop. However, with the Parabolic SAR and MACD both bullish, we could see ETH push up again.

Looking at IntoTheBlock’s IOMAP for the Ethereum price, we can see that ETH has strong support at around $4223. At this price level, more than 530,000 addresses have bought almost 9 million ETH.

The 4-hour Ethereum price chart shows us that ETH had pushed up to $4613 on the 3rd. However, ETH could not maintain this level, as the price dropped to $4484, where the 20-bar SMA acted as support. The price posted a marginal recovery from this level, rising to $4546 before slipping below the 20-bar SMA and settling at $4466. ETH maintained the price level for the next few sessions before slipping below the 50-bar SMA and settling at $4374. ETH posted a strong recovery from this session, as the price pushed up to $4608, pushing above the 20-bar and 50-bar SMA. The price continued to rise as it moved up to $4816 before dropping to its current level of $4794. We can see that the Parabolic SAR and MACD are both bullish, indicating that we could see the price push higher. 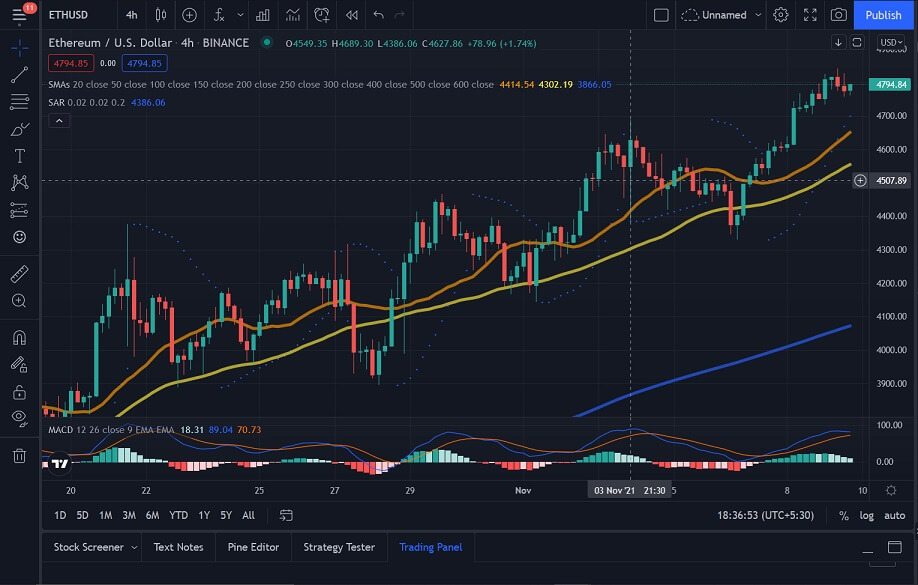 The Ethereum blockchain has burned around $3.8 billion worth of Ether (more than 800,000 ETH) since the implementation of EIP-1559, which has likely contributed to the ongoing rally for the second-largest crypto asset.

In August 2021, EIP-1559, also called the London Hardfork, introduced the concept of burning a portion of the gas fee for all Ethereum transactions. EIP-1559 was introduced to stabilize the volatility of transaction fees on Ethereum. However, it also added a deflationary mechanism to its native asset, ETH.

Since the implementation, more than 800,000 ETH has been burned, per the latest data. This means that nearly $3.8 billion worth of ETH has been taken out of the supply.

Notably, ETH is the second-largest cryptocurrency and the native token used to pay for all transactions on Ethereum. The blockchain underpins the majority of value locked in decentralized finance (DeFi).

The sustained gas fee burn and high demand for ETH across hundreds of dApps support the argument that the asset has become a good store of value or “ultrasound money,” according to its founder Vitalik Buterin. EIP-1559 implementation has also become a major catalyst for ETH’s rally over the last few months.

Looking at the Ethereum price chart, ETH has fallen into the red during the current session. If sellers can push the price down, then we could see ETH drop towards $4700. However, if the price recovers, then it could push to $4850.