The Ethereum price had started the previous week on a bearish note, dropping by 1.33% on Monday. Tuesday saw a sharp drop as ETH slipped below the 20-day SMA and settled at $4212 after dropping by over 7%. On Wednesday, the price managed to recover, pushing up by almost 2%, but fell back the following session, dropping by almost 7%, slipping below the 50-day SMA, and settling at $3998. However, Friday saw a strong recovery, with the price pushing back above the 50-day SMA and settling at $4299. 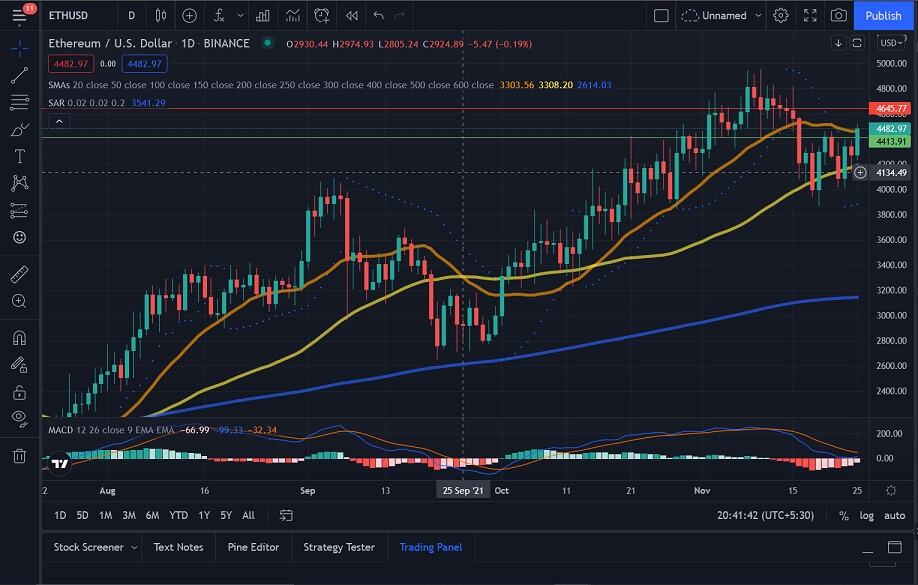 After rising to $4299 on Friday, the Ethereum price continued to push up on Saturday, rising to $4416. However, Sunday saw the price fall back, with ETH dropping to $4262. The bearish sentiment continued on Monday, with ETH slipping below the 50-day SMA and settling at $4089. ETH posted a strong recovery on Tuesday, pushing back above the 50-day SMA and settling at $4341 before falling back on Wednesday, dropping by 1.58%. The current session sees the price up significantly as buyers look to push the price to $4500.

We can see that the Parabolic SAR has flipped to bullish, indicating that the price could push up further.

Looking at IntoTheBlock’s IOMAP for the Ethereum price, we can see that ETH has strong support at around $4413. At this price level, over 624,000 addresses have bought more than 10 million ETH.

We can see that the MACD is currently bullish, indicating that the price could push higher during the current session. 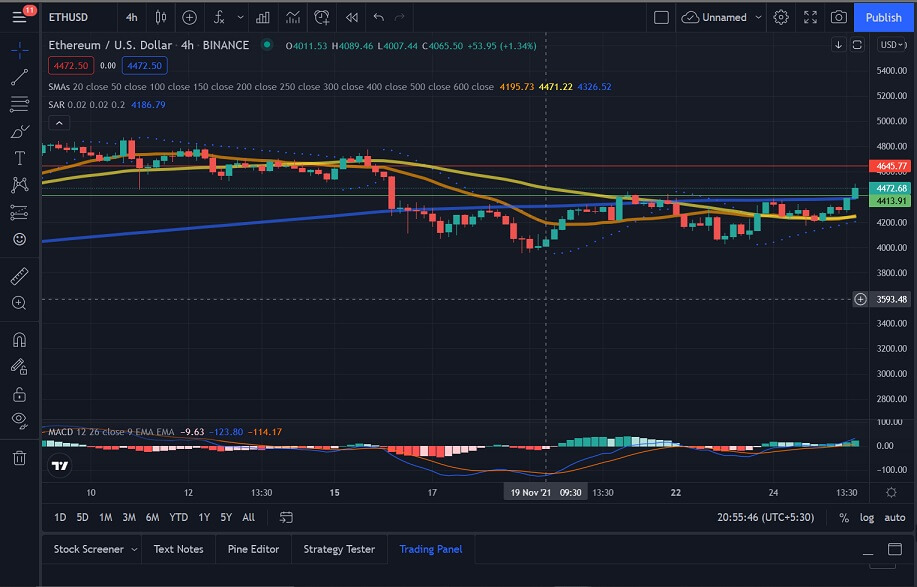 EIP-1559 has now burned over 1 million ETH, worth roughly $4.3 billion. The fee burning proposal shipped as part of the London hardfork on August 5 and has rapidly diminished the supply of ETH amid a period of high activity on the network.

Ethereum introduced EIP-1559 to make the cost of transactions more predictable as users were previously required to bid to miners to get their transactions added to a block. It added a base fee to every Ethereum transaction, the minimum amount of gas that needs to be spent to add a transaction to a block (users can also add a tip for miners when they make a transaction). Crucially, the base fee gets burned with every transaction, in turn reducing the ETH supply.

According to data from ultrasound.money, Ethereum has burned just over 1 million ETH at a rate of around 6 ETH per minute. The biggest contributor so far has been the NFT marketplace OpenSea with over 100,000 ETH burned, which can be explained by the growing interest in NFTs throughout this year. ETH transfers and trades on Uniswap V2 are ranked as the second and third biggest burners.

EIP-1559 has occasionally been compared to Bitcoin’s halving events, which reduce the supply of BTC paid to miners every four years. When Ethereum completes its merge to Proof-of-Stake, expected to land sometime in 2022, EIP-1559 could offset issuance and potentially make ETH a deflationary asset.

The London hardfork that introduced EIP-1559 was Ethereum’s last major update. Next up is “the merge,” which will see Ethereum mainnet dock to the Beacon Chain, marking a long-awaited move from Proof-of-Work to Proof-of-Stake in Q1 or Q2 of next year.

Looking at the Ethereum price chart, we can see that ETH has made a strong recovery during the current session. If the current sentiment persists, we could see ETH push to $4500.