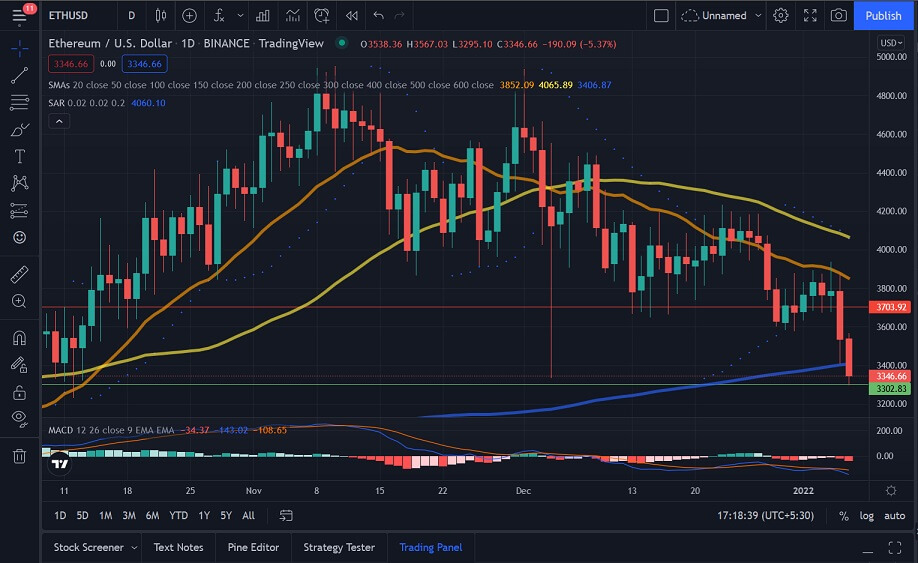 After dropping to $3764 on Friday, the Ethereum price recovered over the weekend, rising by 2.52% on Saturday and 1.69% on Sunday, ending the weekend at $3831. However, the price fell back in the red on Monday, falling by 1.72% and settling at $3765. ETH was able to register a marginal increase on Tuesday but fell back in the red on Wednesday, falling by nearly 7%, settling at 43536. The current session sees ETH down by nearly 6%, having slipped below the 200-day SMA as well.

We can see that the MACD and Parabolic SAR are bearish, indicating that ETH could drop further.

IntoTheBlock’s IOMAP for the Ethereum price shows us that ETH faces strong resistance at around $3708. At this price level, over 960,000 addresses have sold more than 4.7 million ETH.

The 4-hour Ethereum price chart shows us that ETH had registered a sharp drop on the 31st, falling to $3624. The price recovered from this level, rising to $3724 and then pushing above the 20-bar SMA on the 1st when the price rose to $3748. With the 20-bar SMA acting as support, ETH could stay at this level and rose to $3831 on the 3rd, where the 50-bar SMA was acting as resistance. As a result, ETH could not push past this level and fell back to $3745, slipping below the 20-bar SMA. ETH pushed back up from this level, rising to $3847, pushing above the 20 and 50-bar SMAs. ETH was able to stay at this level for the next few sessions before dropping below the 20 and 50-bar SMAs on the 5th and falling to its current level of $3356.

The Parabolic SAR and MACD have flipped to bearish, indicating a further price drop. 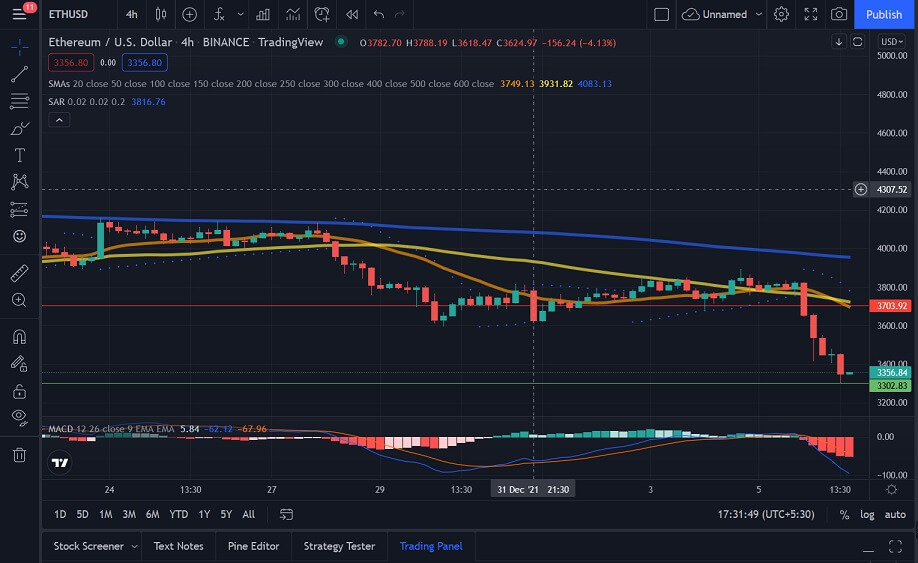 MetaMask has become one of the biggest crypto apps, competing with Coinbase and Binance as the blockchain connector attracts more than 21 million users. There are now more than 11 million active monthly users of the Metamask wallet, 100,000 of them using just the ox protocol when interacting with the vast space of DeFi.

The 2016 invention has grown by 10x since 2020 when it surpassed one million users. In 2019, it crossed 250,000. It has established itself as a key part of web3, an umbrella term to include DeFi, NFTs, and pretty much all of the smart contract-based activity.

As a ConsenSys incubated startup, it has expanded to include other chains and an app browser on mobile. It remains free to use, and in its now 6th year, there have still been no protocol-level problems.

It is online, so that makes it a hot wallet, and thus anyone sensible would still hold only small amounts there, less than $10,000 at most, but it has become an integral part of the Ethereum system.

Everything that Consensys founder Joseph Lubin says is now closely scrutinized for the tiniest hints on whether Metamask will token.

The latest round follows two funding rounds conducted in 2021 amid NFT technology’s first mainstream boom. In March, it completed a Series A round that saw participation from angel investors like Mark Cuban and Tim Ferris. In July, it closed a $100 million Series B funding round led by Andreessen Horowitz that valued the firm at $1.5 billion.

In a blog post announcing the raise, OpenSea outlined four key goals it is aiming to achieve with its latest cash injection, stating:

“We have four goals for this funding: 1) accelerate product development, 2) significantly improve customer support and customer safety, 3) meaningfully invest in the wider NFT and Web3 community, and 4) grow our team.”

The Ethereum price chart shows us that ETH has been extremely bearish over the past couple of days. If the current sentiment persists, we could see ETH drop to $3300, where the price could find support.