Ethereum Price Prediction: Can ETH Push Back Above $3800?

The Ethereum price has slipped below $3800 during the ongoing session, with chances that ETH could slip back in the red during the ongoing session. ETH had ended the weekend on a positive note, rising by 1.69% on Sunday. However, the price fell back on Monday, dropping to $3765, before recovering on Tuesday and rising to $3785. The current session also sees ETH marginally up, although sellers are looking to take control of the session.

The Ethereum price started the previous week in the red, registering a marginal drop on Monday. Tuesday saw ETH continue to drop, as the price fell by over 6% on Tuesday and settled at $3794. The bearish sentiment continued on Wednesday, as the price fell to $3630, dropping by over 4%. ETH pushed up on Thursday despite the bearish sentiment, rising by over 2% and settling at $3710 before falling to $3674 on Friday. 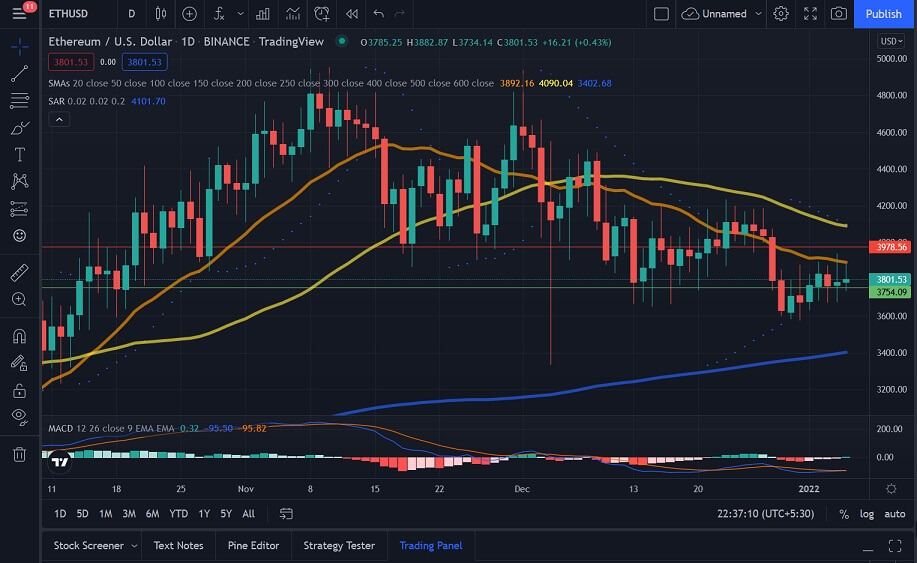 The Ethereum price recovered over the weekend, as ETH rose by 2.52% on Saturday and moved to $3767. Sunday saw ETH continue to push higher, rising by nearly 2% to end the weekend at $3831. However, despite the bullish weekend, ETH was back in the red on Monday, as the price fell by nearly 2%, dropping to $3765. ETH registered a marginal increase on Tuesday and continued to remain in the green during the current session, with the price currently at $3801.

We can see that the MACD has just flipped to bullish, indicating that we could see ETH push higher.

IntoTheBlock’s IOMAP for the Ethereum price shows us that ETH faces strong resistance at around $3979. At this level, over 1.5 million addresses have sold more than 12 million ETH.

The 4-hour Ethereum price chart shows us that ETH had registered a sharp drop on the 31st, falling to $3624. The price recovered from this level, rising to $3724, then pushing back above the 20-bar SMA and moving to $3767 on the 2nd. The price registered a marginal drop before pushing to $3836 on the 3rd. At this level, the 50-bar SMA was acting as resistance, and the price registered a sharp drop, falling back below the 20-bar SMA and falling to $3740. ETH made a strong recovery from this level, as it pushed above the 20 and 50-bar SMAs and settled at $3846 before moving to its current level of $3795.

We can see that the MACD and Parabolic SAR are both currently bullish. However, if the price continues to drop, we could see them flip to bearish. 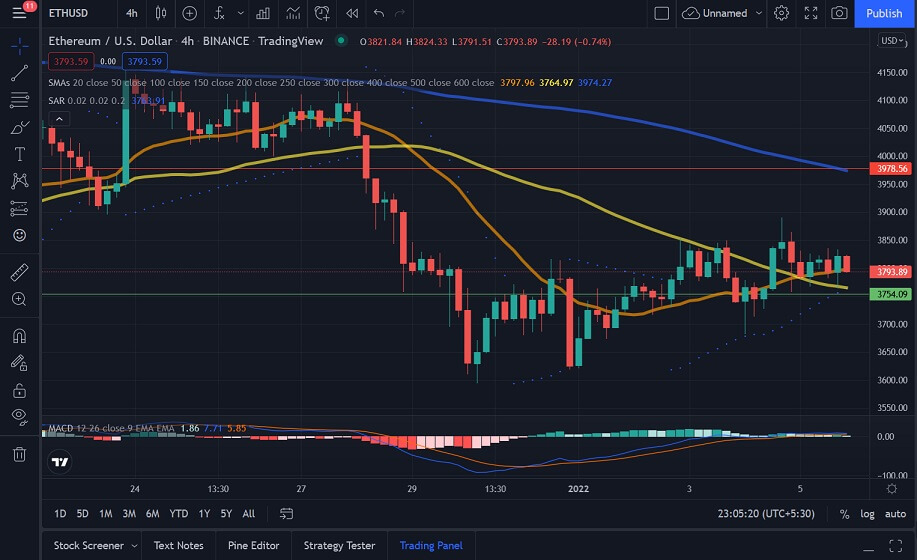 Vitalik On Ethereum Development: “We Are 50% Of The Way There.”

Ethereum co-founder Vitalik Buterin recently discussed a five-part roadmap on the latest Bankless podcast where he outlined the necessary steps for Ethereum to survive and thrive. To achieve ultimate scalability and decentralization, Butalik claimed that Ethereum needs to be more agile and more lightweight in terms of blockchain data so that more people can manage and use it.

At the beginning of December, Buterin also published an article titled “Endgame,” where he makes the case that all blockchains will ultimately converge in the future while listing the tools that would allow for block verification to happen in a decentralized and censorship-resistant way.

The first step is called the merge, referring to the complete transition away from proof-of-work to proof-of-stake, taking place in the first half of 2022. Part two, called the surge, plans to increase scalability, massive bandwidth, and throughput, particularly on zk-Rollups. The merge and the surge are the most important upgrades, according to Buterin, to building out the Ethereum network.

When asked to evaluate Ethereum’s progress made so far in the past six years, Buterin asserted that “we are 50% of the way there” thanks to the launch of the Beacon Chain, the London hard fork, and even the rise of nonfungible tokens. But there is still a long way to go.

Once the merge and surge go through and there is full sharding implementation, it will supposedly be 80% complete. The roadmap, which is estimated to take another six years to complete, will lead to 100% optimization, according to Buterin.

The next phases include the verge, enabling more users to run nodes and essentially “democratizing access to the broadest number of participants possible to anyone and everyone who wants to verify the validity of the chain,” said Buterin. Following the verge are the purge and splurge phases, referring to the elimination of historical data and the addition of miscellaneous upgrades, respectively.

Buterin summarized his ideal scenario for an Ethereum 2.0 that does not sacrifice decentralization for scalability:

“Leave the past in the past and create an Ethereum that actually becomes simpler and simpler over time.”

Looking at the Ethereum price chart, we can see that ETH has slipped below $3800 during the current session. If the price continues to drop, we could see ETH slip to $3750. However, if ETH recovers, we could see it push back above $3800.