The Ethereum price has started the week on an extremely bearish note, with market watchers on tenterhooks as the price dropped dangerously close to $3000. ETH had slipped below the 200-day SMA on Friday, dropping over 6%. ETH continued to drop over the weekend, falling by 3.58% on Saturday and settling at $3081. The price pushed up on Sunday, rising by 2.28%, but then slipped back in the red during the current session, with the price dropping to $3000. 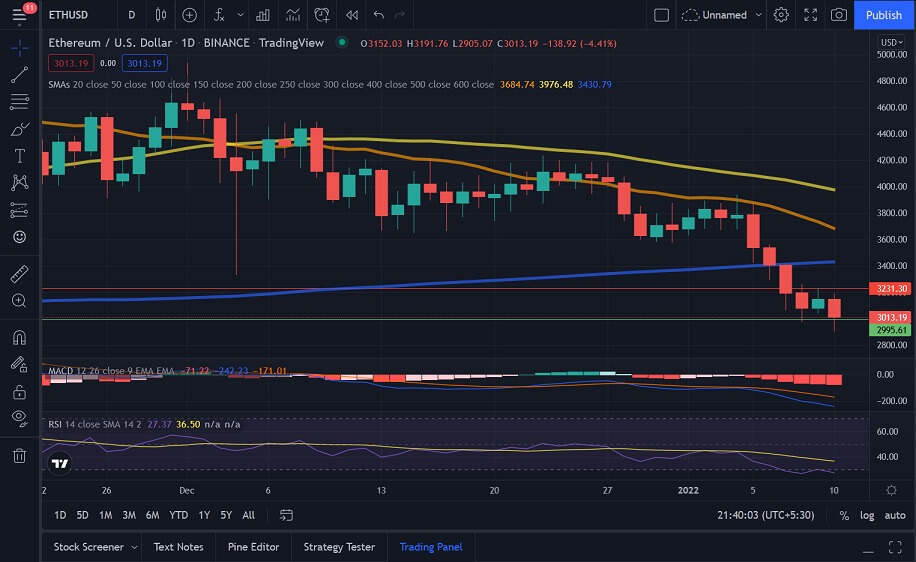 The Ethereum price continued to drop on Thursday, falling by nearly 4% and settling at $3408. ETH continued to drop on Friday, slipping below the 200-day SMA and settling at $3196 after a drop of over 6%. The bearish sentiment persisted on Saturday, as ETH dropped by nearly 4% to $3081 before registering an increase of 2.28% on Sunday and moving to $3152. However, ETH fell back in the red during the ongoing session, with the price currently between $3000-$3010.

We can see that the RSI has slipped below 30, indicating that the asset is oversold. With support building at $3000, we could expect the price to recover from this level.

Looking at IntoTheBlock’s IOMAP for the Ethereum price, we can see that ETH faces strong resistance at around $3232. At this price level, over 1.1 million addresses have sold more than 1.6 million ETH.

The 4-hour Ethereum price chart shows us that ETH had registered a sharp decline on the 6th when it dropped to $3448. ETH posted a marginal recovery from this level before dropping to $3200 on the 7th. The price dropped further to $3132 before registering a marginal increase and rising to $3221 before falling to $3027 on the 8th. ETH made a strong recovery from this level, rising to $3205, where the 20-bar SMA acted as resistance. As a result, ETH fell back, dropping to $3007 and then moving to its current level of $3025. 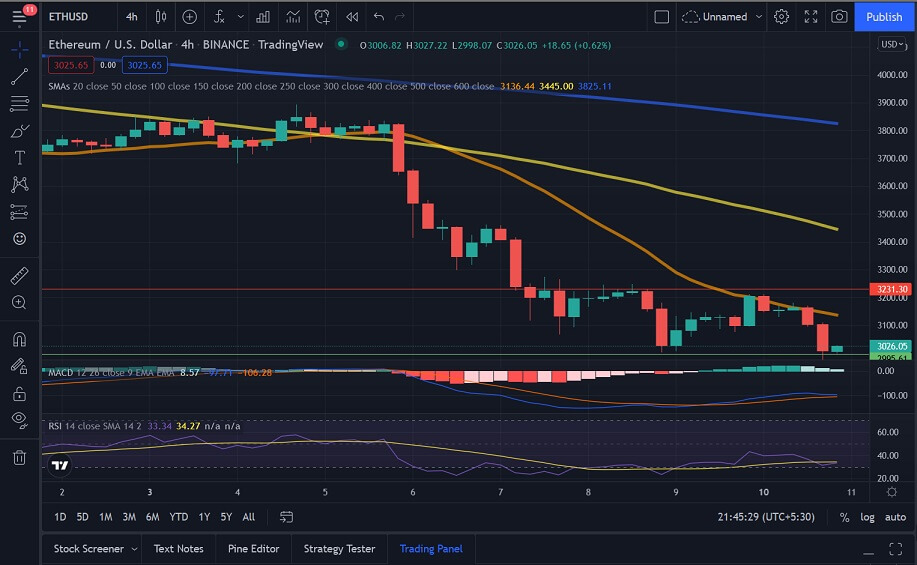 Veteran chartist Peter Brandt recently tweeted that Ethereum is in a new bear market. Brandt entered the commodity trading business in the 1970s. The chartist described the second-largest blockchain as “overly complicated,” “expensive,” and “awkward.”

He added that ETH’s underperformance against Solana (SOL), the token behind one of the leading “Ethereum killers,” was “completely warranted.”

"Ethereum $ETH is in a bear trend because it is an overly complicated/expensive/awkward platform to the NFT/specialty token universe/metaverse. In fact, $ETH's bear trend against $SOL is completely warranted NFT nerds, please excuse me if I did not use the "correct" terminology."

The SOL token recently reached sixth place by market capitalization after seeing monstrous growth in 2021, but it still has a lot of catching up to flippen Ethereum.

The Ethereum community bristled at Brandt’s bearish analysis, with some of its members claiming that the trader’s tweets could be used as a contrarian indicator.

Brandt took the criticism on the chin, joking that it is time to buy more when he says something bearish (and vice versa). At the same time, he also defended his bearish call on Cardano in response to a disgruntled follower.

Earlier this week, the trader also recently tried to warn Bitcoin dip-buyers against catching a falling knife amid the flagship cryptocurrency’s ongoing plunge.

Looking at the Ethereum price chart, we see that ETH has been in freefall, with the markets witnessing a bloodbath. However, support is building around $3000, and we could see ETH recover from this level.