The Ethereum price registered a marginal drop on Sunday, but it was enough to push the price below $4400, as the price slipped to $4355. ETH had been quite bearish during the previous week and had dropped by almost 7% on Thursday, slipping below the 50-day SMA. However, the price made a strong recovery on Friday, as it rose by 7.52%, pushing back above the 50-bar SMA and settling at $4299. The price moved past $4400 on Saturday, as it settled at $4416 before dropping during the latest session. 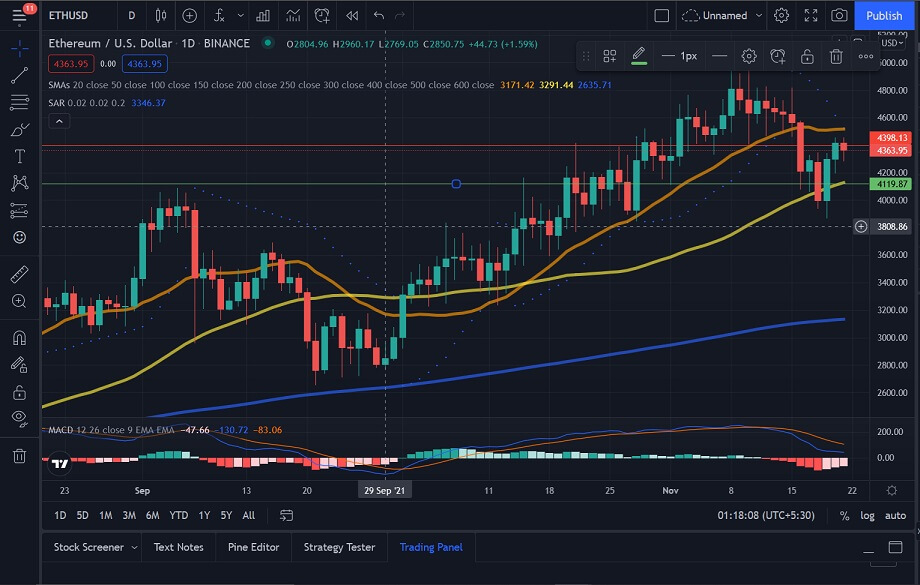 After rising to $4288 on Wednesday, the Ethereum price dropped back on Thursday, as it fell by almost 7%, slipping below the 50-day SMA and settling at $3998. However, the price pushed back up on Friday, rising by 7.52%, pushing back above the 50-day SMA, and settling at $4299. The price continued to push up on Saturday, as it moved to $4416 before falling back into the red on Sunday, with the price currently at $4356.

We can see that the Parabolic SAR is currently bearish, indicating that the price could drop during the current session.

Looking at IntoTheBlock’s IOMAP for the Ethereum price, we can see that ETH faces strong resistance at around $4396. At this price level, more than 416,000 addresses have sold over 8.2 million ETH.

We can see that the MACD is bullish; however, if the price begins to drop, we could see it flip to bearish. 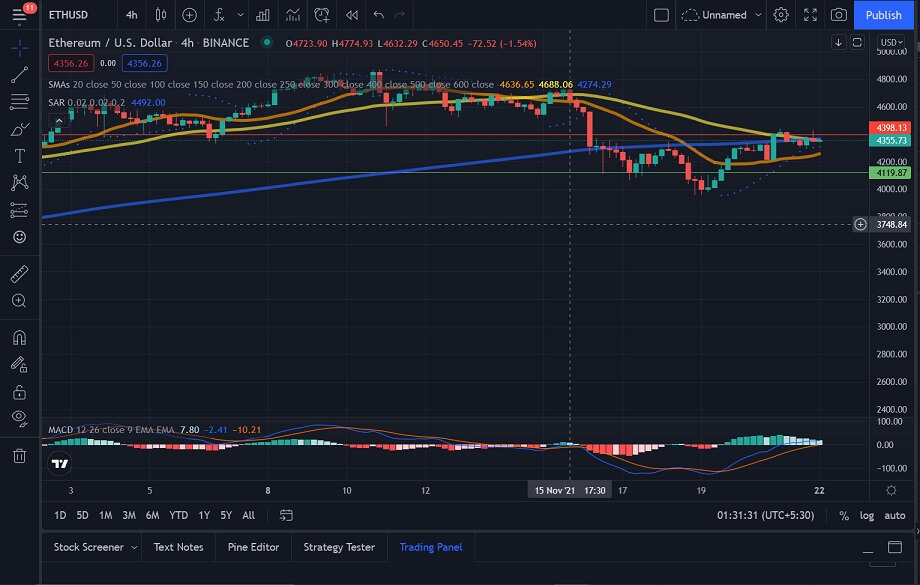 With the growth of DeFi, the Ethereum wallet MetaMask has increased in prominence as an entry point for novice users. The company recorded a revenue of $200 million, according to a report by Delphi Digital.

These enormous profits can be attributed to its native swapping feature, which the platform had launched in September last year. It provides users with the best on-chain execution prices by collecting quotes from multiple DEX aggregators. Albeit, charging 0.875% fees for each swap, which the report noted was “exorbitant by DeFi standards." It added:

“The simple UX of swapping via the Metamask plug-in seems to trump the ludicrous fees the wallet charges for trades.”

Along with the high fee, MetaMask’s profits are protected by “virtually no cost to their revenue,” according to the report.

“Metamask’s customer acquisition cost (CAC) is a big, fat zero. Metamask has no token incentives or emissions, so there’s virtually no cost to their revenue. Their profit margins are close to 100%. Imagine if they had a token.”

Ethereum co-founder and head of MetaMask’s parent company ConsenSys, Joseph Lubin, recently teased the idea of a MetaMask token on Twitter. While further plans are yet to be revealed, this triggered speculations of an airdrop and increased popularity.

Looking at the Ethereum price chart, we can see that ETH has dropped marginally during the current session. If the current sentiment persists, then sellers could push the price to $4300.