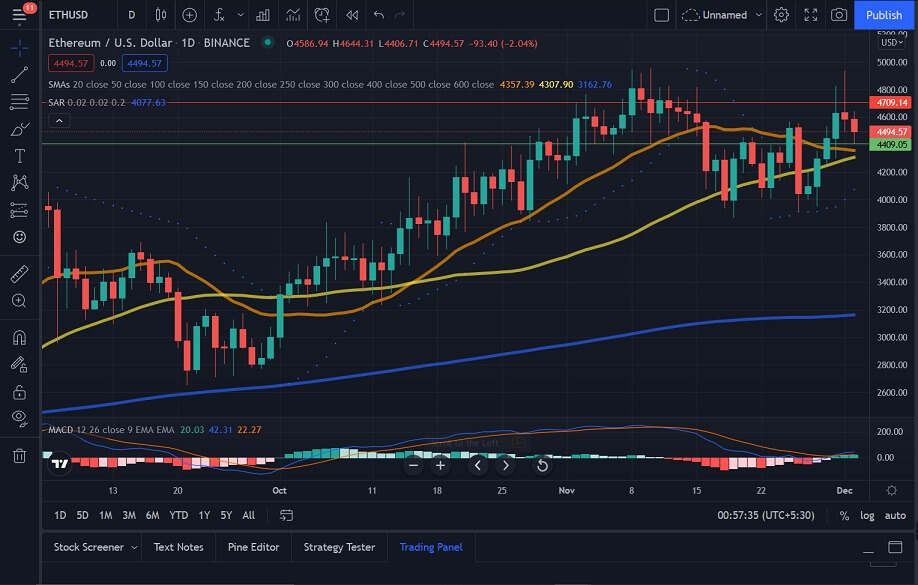 After dropping to $4045 on Friday, the Ethereum price pushed up over the weekend, registering an increase of 1.31% on Saturday and then rising by almost 5% on Sunday to move above the 50-day SMA and settle at $4298. On Monday, the bullish sentiment persisted on Monday, as ETH pushed above the 20-day SMA and settled at $4449, and then pushed to $4631 on Tuesday. However, after reaching this level, ETH turned bearish, dropping by 0.94% on Wednesday before slipping below $4500 during the current session.

We can see that the MACD has flipped to bullish; however, if the price continues to drop, we could see it flip back to bearish.

Looking at IntoTheBlock’s IOMAP for the Ethereum price, we can see that ETH has strong support at around $4405. Over 970,000 addresses have sold more than 9.6 million ETH at this price level.

The 4-hour Ethereum price chart shows us that ETH had dropped to $3986 on the 26th, after dropping below the 20 and 50-bar SMAs. The price pushed up marginally from this level before dropping to $4027. ETH pushed above the 20 and 50-bar SMAs on the 28th, as the price moved to $4298. The price continued to push higher, crossing the 200-bar SMA on the 30th and rising to $4763. However, after reaching this level, the Ethereum price fell back below the 20-bar SMA and moved to its current level of $4494. 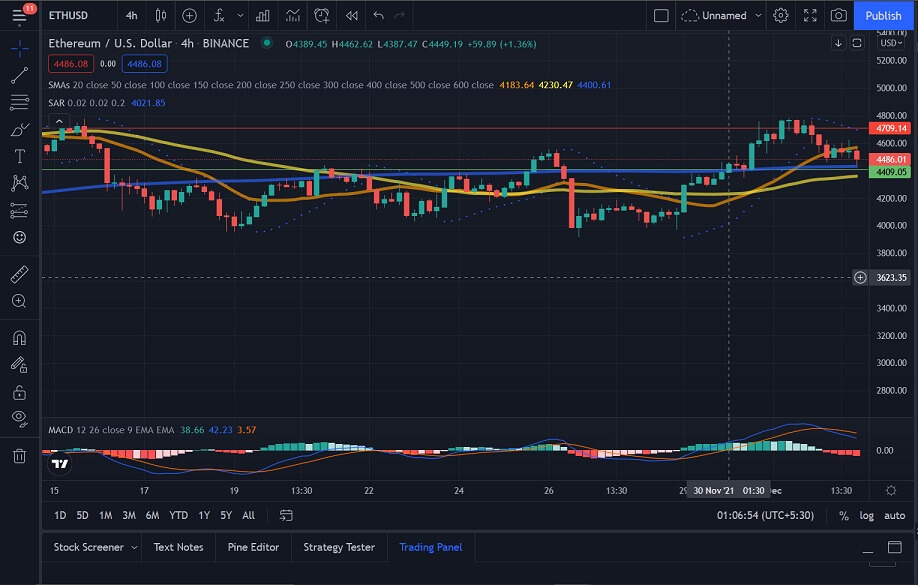 FTX US has rushed ahead of Coinbase to open trading for Ethereum NFTs. The firm is looking beyond Solana for its NFT marketplace.

"We’re excited to expand our NFT marketplace, allowing users to buy, sell, and display their Ethereum NFTs alongside their Solana NFTs for the first time! Probably nothing."

The leading exchange announced it had begun trading Ethereum NFTs, adding to the selection of Solana-based tokens that have been available on the platform since it launched in October.

The exchange launched the update with a host of the most sought-after Ethereum collections, including Bored Ape Yacht Club, CrypToadz, Doodles, and World of Women. Additionally, a November 23 teaser posted by FTX suggests that CryptoPunks and Cool Cats will appear on the marketplace in the future.

FTX.US jumped onto the NFT bandwagon by rolling out its marketplace with support for Solana NFTs in October when Coinbase announced its plans to launch a similar offering. Coinbase NFT is due to land sometime before the end of the year, and it will also support Ethereum NFTs.

While the move could help FTX.US go up against Coinbase, it still has several other competitors to contend with. Arguably the biggest is OpenSea, which hit $10 billion in trading volume last month, far surpassing any of its competitors.

FTX.US’ NFT marketplace differs from OpenSea as it holds custody of each token, similar to how centralized exchanges hold other crypto assets. FTX.US also charges only 2% sale fees, whereas OpenSea takes 2.5%.

Looking at the Ethereum price chart, we see that ETH has slipped below $4500 as sellers continue to push the price down. If the current sentiment persists, we could see ETH drop to $4400.