The Ethereum price slipped below $3100 during the online session as ETH dropped back to the levels it had fallen to at the start of the year. ETH had pushed up on Friday, rising over 2.10% and settling at $3309. The weekend remained bullish, as ETH price rose by 0.54% on Saturday and then by 0.65% on Sunday to end the weekend on a positive note at $3349. However, the price fell back on Monday, as ETH dropped over 4%, falling to $3212.

The Ethereum price was extremely bearish at the start of the previous weekend, dropping by 3.58% to $3081. However, the price recovered on Sunday, rising to $3152, before dropping back on Monday and settling at $3084. On Tuesday, the price made a strong recovery, rising over 5% and moving to $3241, and then rose by 4.08% on Wednesday to settle at $3373. Despite the bullish sentiment, the price fell back on Thursday, dropping by almost 4% and settling at $3241.

After dropping to $3241 on Thursday, the Ethereum price made a strong recovery on Friday, pushing above $3300 and settling at $3309. The weekend saw ETH remain in the green, as it registered an increase of 0.54% on Saturday and 0.65% on Sunday, ending the weekend at $3349. ETH fell back in the red on Monday, dropping over 4% and settling at $3212. The price continued to drop during the ongoing session, with the price currently down over 3%.

The MACD is currently bullish, but if the price continues to drop, we could see it flip to bearish.

IntoTheBlock’s IOMAP for the Ethereum price shows us that ETH faces strong resistance at around $3245. At this price level, over 1.5 million addresses have sold more than 2 million ETH. 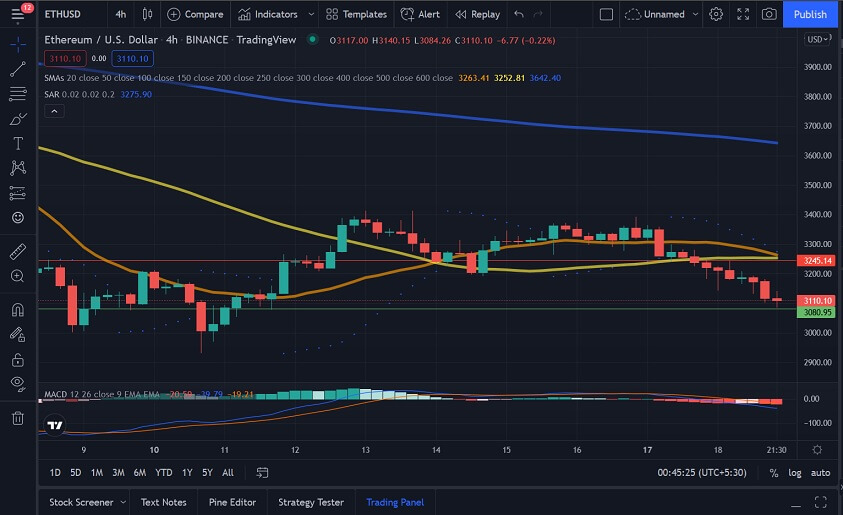 Crypto.com Loses $15 Million Worth Of Ethereum To Hackers

Major cryptocurrency exchange Crypto.com has lost roughly $15 million worth of Ethereum (ETH) to hackers, according to blockchain security company PeckShield.

"The @cryptocom loss is about $15M with at least 4.6K ETHs, and half of them are currently being washed..."

"We have a small number of users reporting suspicious activity on their accounts. We will be pausing withdrawals shortly, as our team is investigating. All funds are safe."

Half of the stolen crypto is being laundered with the help of the Ethereum-powered coin mixing service Tornado Cash. A couple of days back, Crypto.com announced that it had halted withdrawals due to “suspicious activity.” Some users started complaining about losing funds.

It took 14 hours for the Singapore-headquartered company to resume withdrawals. In a Twitter thread, CEO Kris Marszalek said that customer funds were not lost. He also added that the Crypto.com team had bolstered the exchange infrastructure in response to the incident. The exchange is still conducting an internal investigation of the security incident.

"Some thoughts from me on the last 24 hours: - no customer funds were lost - the downtime of withdrawal infra was ~14 hours - our team has hardened the infrastructure in response to the incident We will share a full post mortem after the internal investigation is completed."

While rug pulls and hacks are rampant in the decentralized finance space, it remains unclear how a centralized exchange of such a high caliber fell victim to the attack. Marszalek has promised to publish a post-mortem as soon as the investigation is completed.

Polygon, one of the most popular layer-2 scaling solutions of Ethereum, saw its mainnet implement one of the biggest upgrades recently. Namely, this is the Ethereum Improvement Proposal 1559 that will begin burning MATIC tokens as part of every transaction.

The team officially announced that the update was rolled out recently, following a successful upgrade of its Mumbai testnet. One of the most important changes to the Polygon network is the introduction of a deflationary token burning mechanism that will begin destroying the network’s native MATIC token while also improving fee visibility.

"EIP-1559 gets rid of first-price auction as the main mechanism for fee calculation. Instead, there is a discrete base fee for transactions to be included in the next block and a priority fee to speed up processing. The base fee, which fluctuates depending on network congestion, is then burned."

Major exchanges, including Binance, supported the upgrade. It took place at block height 23,850,000. MATIC’s price was down by 7.8% recently. Nevertheless, it is worth taking a look at the longer-term implications of the introduction of a burning mechanism.

However, unlike Ethereum, MATIC has a fixed supply of 10 billion, so any reduction in the overall number of tokens available on the market will have a definitively deflationary effect.