The Ethereum price hit an intraday low of $2680 during the ongoing session before pushing up to $2726, although ETH remains down by nearly 2%. ETH had registered a marginal increase on Thursday after a highly volatile session that saw significant price swings. Friday saw ETH register a significant increase, pushing up by almost 7% and moving to $2769. ETH remained in the green on Saturday, registering a marginal increase before dropping back during the ongoing session.

Ethereum Price Chart Indicates ETH Looking To Push Back Towards $2800

The Ethereum price went into the previous weekend on a fairly bearish note, dropping by almost 4% on Friday. The price continued to drop over the weekend, as ETH registered a marginal drop on Saturday and then dropped by over 5% on Sunday to end the weekend on a bearish note at $2621. Monday saw the bearish sentiment continue, as ETH dropped by 1.98%, falling to $2569. Despite the bearish sentiment, ETH recovered on Tuesday, as the price rose by nearly 3%, rising to $2638. 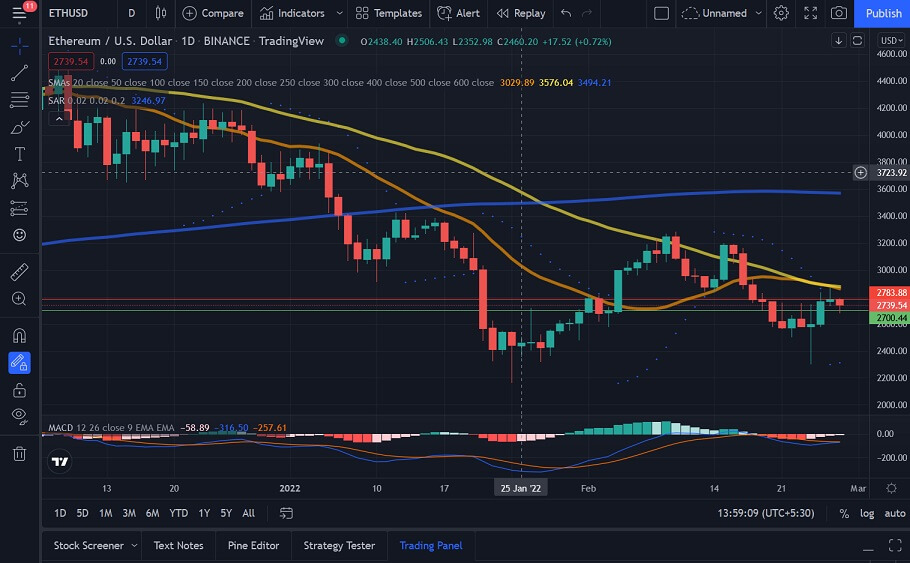 After rising to $2638 on Tuesday, the Ethereum price fell back on Wednesday, falling by 2.22% and dropping to $2579. ETH managed to register a marginal increase on Thursday after a highly volatile session, rising by 0.72%. Friday saw ETH rise by nearly 7%, as the price rose to $2769, and then registered a marginal increase on Saturday, moving to $2780. However, ETH fell back during the current session, with the price down by just over 1%.

We can see that the Parabolic SAR has flipped to bullish, indicating that we could see the price recover.

Looking at IntoTheBlock’s IOMAP for the Ethereum price, we can see that ETH faces strong resistance at around $2773. At this price level, over 870,000 addresses have sold more than 10.7 million ETH.

More On Ethereum: You Asked: What If I Invest $10 In Ethereum (ETH)? 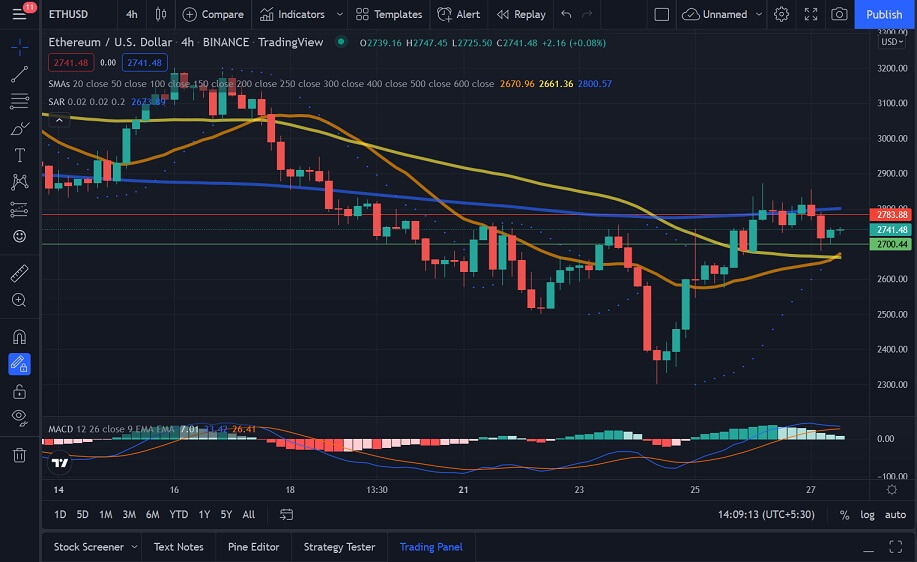 A Sharp Spike in Gas Fee on Ethereum; is Russia-Ukraine Conflict To be Blamed

The international community has been mobilizing resources and sending funds to various organizations supporting Ukraine’s army. A self-described “Web3 initiative” – RELI3F UKR – has been selling NFTs with the promise that all proceeds from primary sales will go towards relief efforts in Ukraine, along with some secondary sales proceeds. According to OpenSea, the floor price was about 0.053 ETH, and the trading volume was about 456 ETH recently.

However, like with many popular NFT projects, the frenzy of interest triggered an astronomical rise in gas prices. On 26 February, the median gas price shot past 1,300 gwei before dropping back down to below 100 gwei.

For its part, RELI3F appeared to pat itself on the back and tweeted:

While impressive, many donators were disappointed by the money they lost on gas fees, claiming the funds could have gone to the Ukrainian people instead.

Crypto donations have been a popular option for those who want to financially support Ukrainian relief groups or the military. One estimate reported that more than $4 million had been sent in Bitcoin donations to the army. Critics of NFT-based fundraising have lamented the loss of donations through extravagant gas fees.

The World Wildlife Fund’s recent foray into the NFT industry with its “tokens for nature” collection minted on the Polygon blockchain also received global backlash due to environmental concerns.

The Ethereum price chart shows us that ETH has registered a drop during the ongoing sessions, although ETH has recovered and is looking to push towards $2800. If ETH can recover, we could see the price move towards $2800, but if bearish sentiment dominates, ETH could slip below $2700.

Is Now the Right Time to Buy Ethereum?

How to Trade Ethereum with $100