The Ethereum price fell back significantly during the ongoing session, as sellers drove ETH down by almost 4% and below $3800. ETH was in the red heading into the weekend as well, registering a drop of over 2%, falling to $3879. The price recovered on Saturday, as ETH rose by 2.15% and settled at $2962. However, ETH was back in the red on Sunday, dropping by 0.95%, before a sharp drop during the ongoing session took ETH down below $3800.

Although the Ethereum price has been quite bearish lately, it had started the previous weekend on a bullish note, rising by almost 5% on Saturday. ETH continued to push up on Sunday, rising by 1.13% and settling at $4134. Despite the bullish weekend, ETH was back in the red on Monday, as the price dropped drastically, falling by over 8% and settling at $3783. Tuesday saw ETH back in the green, as the price pushed up by 2.08% and settled at $3861 before another increase of over 4% took the price to $4022 on Wednesday. 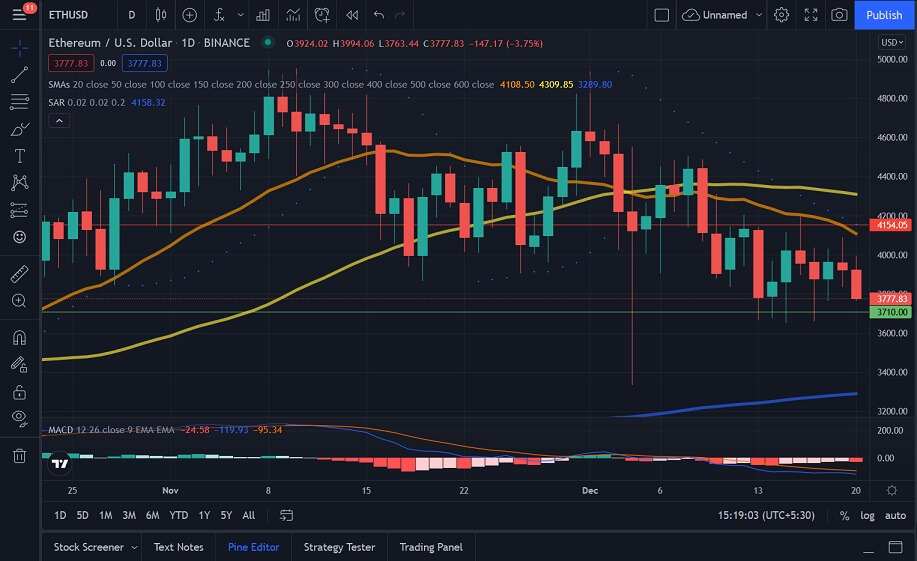 After pushing up to $4022 on Wednesday, the Ethereum price fell back on Thursday, dropping by 1.56% and settling at $3959. On Friday, the price continued to drop, with ETH dropping by over 2% and settling at $2879. However, the price recovered over the weekend, as ETH rose by over 2% on Saturday and settled at $3962. Despite the bullish Saturday, ETH was back in the red on Sunday, falling by 0.95%, before dropping significantly during the ongoing session, as sellers forced the price below $3800.

IntoTheBlock’s IOMAP for the Ethereum price shows us that ETH faces strong resistance at around $4164. At this price level, over 1.6 million addresses have sold more than 12 million ETH.

The 4-hour Ethereum price chart shows us that ETH had pushed up to $3969 on the 15th, pushing above the 20-bar SMA. The price continued to push up from this level, rising above the 50-bar SMA on the 16th and settling at $4085. ETH turned bearish at this level and dropped back below the 50 and 20-bar SMAs, dropping to $3834 on the 17th. With the 20-bar SMA now acting as resistance, ETH could not push above this level until the 18th, when the price rose to $3959, pushing above the 20 and 50-bar SMAs. With the two SMAs acting as support. ETH was able to stay at this level for the next few sessions before dropping back below the 20 and 50-bar SMAs and settling at its current level of $3787.

We can see that the Parabolic SAR and MACD have just flipped to bearish, indicating that we could see the price drop further. 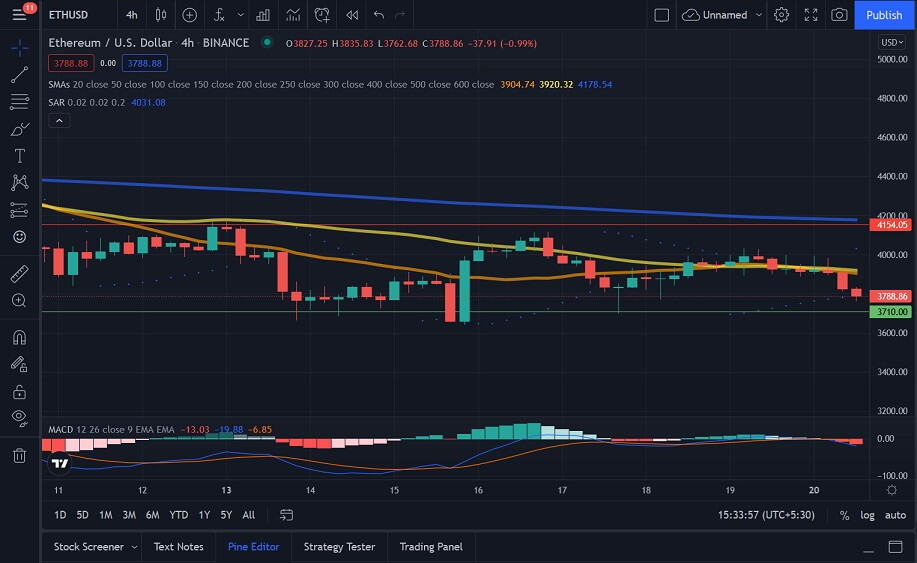 Ethereum co-founder Vitalik Buterin recently had a private meeting with former Argentine President Mauricio Macri during a crypto event in Buenos Aires organized by web3 protocol The Graph. The event celebrated the first anniversary of the project’s mainnet launch.

According to the tweet posted by Macri, the two discussed opportunities presented by crypto and blockchain. He described Ethereum as one of the “most innovative” decentralized technologies of the century.

The Ethereum co-founder came to Buenos Aires unexpectedly, with details about his visit remaining scant. During a meeting with fintech and crypto entrepreneurs, Buterin reportedly spoke favorably about Proof-of-Humanity, an identity verification system for universal basic income developed by Santiago Siri.

Tomi Pierucci, head of tech disruptors vertical at JP Morgan, and Gómez Minujin, the banking giant’s senior country officer for Argentina, were also present at the event. JPMorgan promoted the meeting, according to local media reports.

The Graph’s Lorena Fabris described the Ethereum co-founder as “the Messi of crypto.” He told Forbes that the brand recognition of the protocol experienced a huge boost in Argentina because of Buterin.

The 27-year-old crypto Buterin came to Argentina as part of his vacation. He has been touring Latin America for over three months. The Russian-Canadian programmer is now reportedly looking for a new destination.

Looking at the Ethereum price chart, ETH has fallen significantly during the ongoing session. If the current sentiment persists, we could see ETH drop to $3700. However, there is a chance that the price could see a marginal recovery and push back above $3800.