The Ethereum price is looking to push past the 50-day SMA, acting as resistance at around $4350. ETH had dropped significantly over the weekend, falling by almost 7% on Friday. The price continued to drop on Saturday as it fell to $4215. However, after reaching this level, the price recovered on Sunday and pushed up to $4202. The recovery continued on Monday, with ETH registering an increase of 3.66%, moving back above the 20-day SMA. However, the price fell back on Tuesday, thanks to the 50-day SMA acting as resistance. After dropping by over 6% on Friday, the Ethereum price continued to drop on Saturday, falling by 2.30% and settling at $4125. Despite the bearish sentiment, the price recovered on Sunday, rising by 1.86%. The increase continued on Monday, with ETH rising by 3.66% and pushing above the 20-day SMA to settle at $4356. The 50-day SMA was acting as resistance at this level; as a result, the price fell back on Tuesday, falling to $4310. The current session sees buyers and sellers vying for control, with the price at $4306.

Looking at IntoTheBlock’s IOMAP for the Ethereum price, we can see that ETH faces strong resistance at around $4350. At this price level, over 1.4 million addresses have sold more than 11 million ETH.

The 4-hour Ethereum price chart shows us that ETH had pushed up to $4768 on 1st December. However, the price could not stay at this level and fell back to $4489, slipping below the 20-bar SMA. ETH could stay at this level for the subsequent sessions until the price dropped significantly on the 3rd. ETH slipped below the 50 and 200-bar SMAs and dropped to $3899 on the 4th. However, it then made a strong recovery, as it rose to $4207, before dropping back to $4048. ETH then pushed above the 20-bar SMA on the 5th, pushing above the 50-bar SMA, but fell back to its current level of $4315. We can see that the MACD has flipped to bullish, indicating that the price could rise. However, if the price drops, we could see it flip back to bearish. 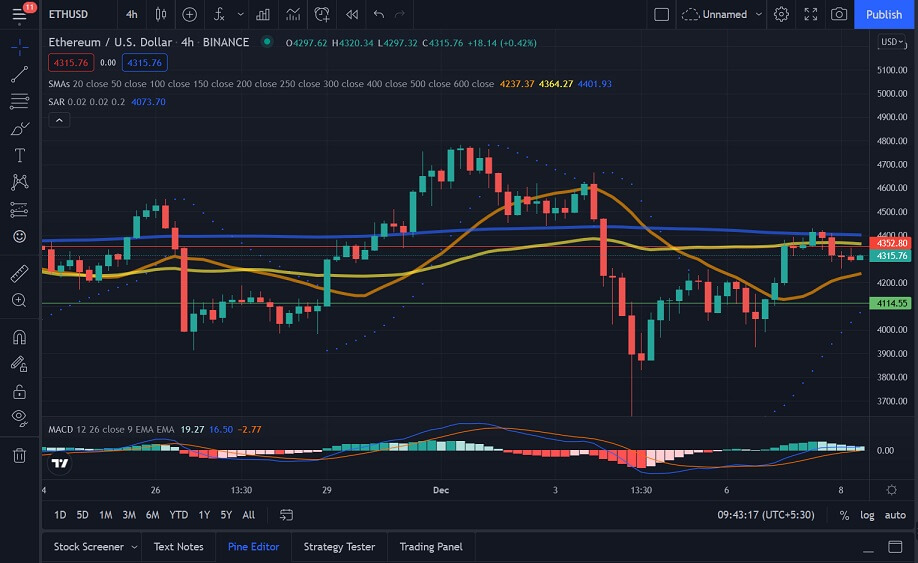 With the recent Ether price surge, the asset’s balance on exchanges is plunging, driven by various factors. The Ethereum balance held on central exchanges has hit a record three-year low, per Glassnode on-chain data. The balance hit the previous three-year low of 14,059,101.985 ETH recently. 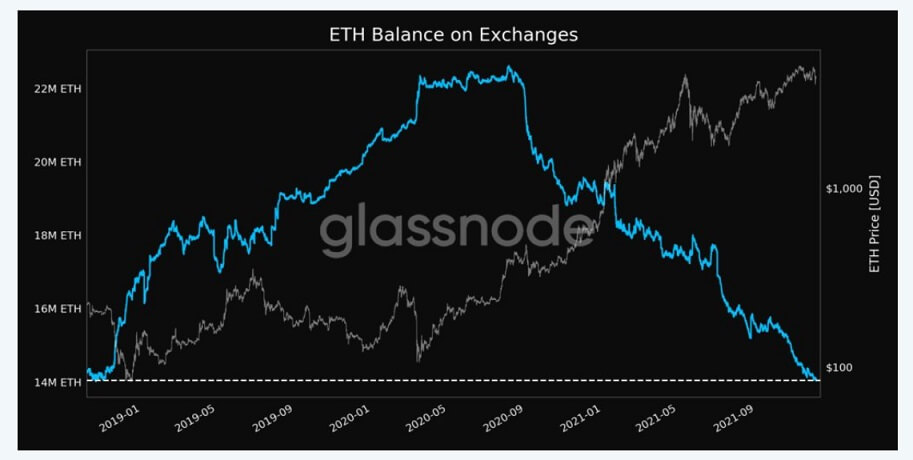 A low balance of ETH on exchanges can be considered a bullish sentiment for the markets. The withdrawals are known to drive a reduction in supply relative to demand on popular crypto trading platforms.

Dropping exchange balances also suggest that long-term investors are moving their assets into secure storage or locking their funds up to earn yields. Most centralized exchange wallets are considered risky and prone to hacks. Notably, Ethereum is undergoing upgrades that will introduce staking capabilities in the network.

The security of central exchange recently came under focus after BitMart crypto exchange lost about $196 million in a hack. Elsewhere, investors might be looking forward to increasing the value of the asset, with some market analysts suggesting that Ethereum has the potential of surpassing Bitcoin.

The declining balance of Ether on exchanges also coincides with the increase of Ethereum locked in smart contracts. The smart contract has been driving the growth of the decentralized finance (DeFi) sector.

The rise in DeFi has allowed for alternatives to centralized exchanges alongside new ways to interact with the cryptocurrency ecosystem, such as lending and yield farming. Therefore, as the asset grows, it will stay longer in the Ether ecosystem instead of exchanges.

The Ethereum price chart shows us that ETH had made a strong recovery on Monday before falling back on Tuesday. The current session sees buyers and sellers struggling for control, and if buyers control the market, we could see ETH test the resistance at $4350. However, if sellers retain control, we could see the price drop below $4300.