The Ethereum price fell back marginally during the ongoing session as sellers pushed the price down. ETH has been extremely bullish in recent sessions and had registered a marginal increase on Thursday, rising by 0.59%. The price continued to push higher, rising by over 11%, pushing above the 20-day SMA and settling at $2996. LTC pushed above the $3000 level on Saturday before dropping back during the current session.

The Ethereum price has been extremely bullish and had started the previous weekend on a similar note, rising by nearly 5% on Friday. The weekend saw ETH remain in the green, rising by over 2% on Saturday and then registering a marginal increase on Sunday to end the weekend at $2605. ETH continued to push higher on Monday, rising by over 3%, moving to $2688 and then registering an increase of 3.74% on Tuesday and moving to $2789, where the 20-day SMA was acting as resistance. 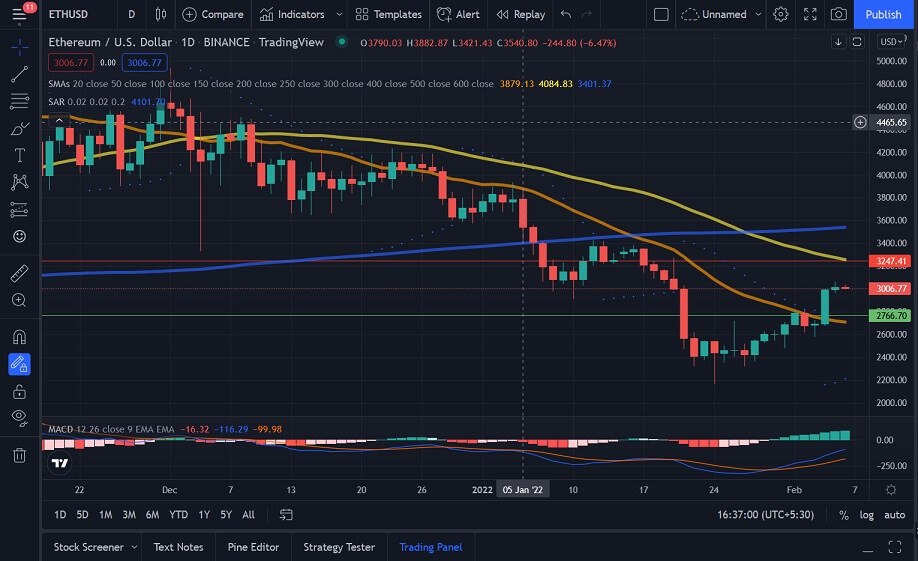 With the 20-day SMA acting as resistance, the Ethereum price fell back on Wednesday, falling by nearly 4% and settling at $2680. However, ETH recovered on Thursday, registering a marginal increase and then surging by over 11% on Friday, pushing above the 20-day SMA and settling at $2996. The weekend saw ETH push above the $2700 level after it registered a marginal increase on Saturday before dropping back during the current session.

We can see that the MACD is currently bullish, indicating that the price could recover from this level.

IntoTheBlock’s IOMAP for the Ethereum price shows that ETH has strong support at around $2764. At this price level, over 619,000 addresses have bought more than 9 million ETH.

We can see that the MACD and Parabolic SAR are both currently bullish, but if ETH continues to drop, we could see them flip to bearish. 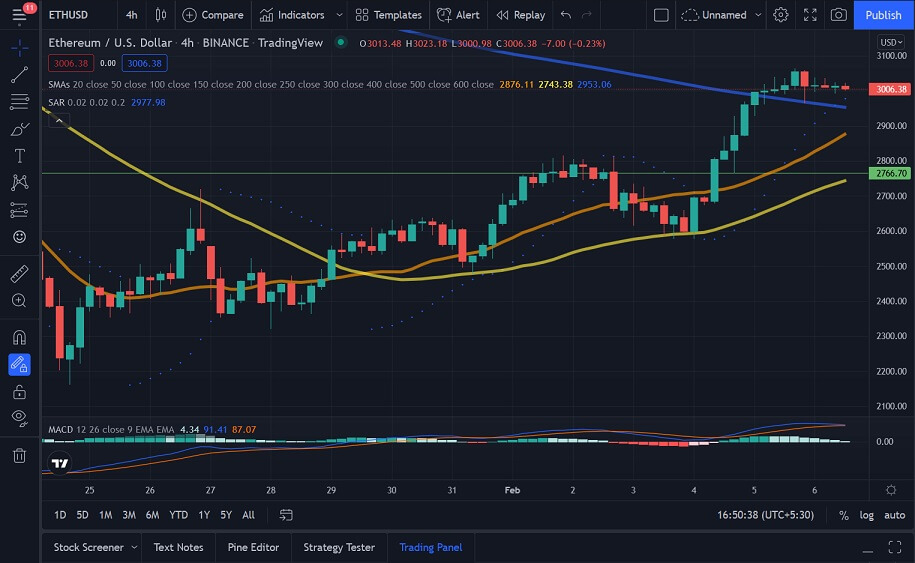 The US Department of the Treasury released a study on the high-value art market, highlighting the potential in the nonfungible tokens (NFT) space to conduct illicit money laundering or terror financing operations.

The treasury’s “Study of the facilitation of money laundering and terror finance through the trade in works of art” suggested that the increasing use of art as an investment or financial asset could make the high-value art trades vulnerable to money laundering:

“The emerging online art market may present new risks, depending on the structure and incentives of certain activity in this sector of the market (i.e., the purchase of NFTs, digital units on an underlying blockchain that can represent ownership of a digital work of art).”

The study underlined the importance of NFTs in representing ownership of the digital and physical property that is managed and controlled via smart contracts and digital wallets. The treasury also noted that the price of NFTs is determined by the buyer and seller and not the market:

“According to US authorities, in the first three months of 2021, the market for NFTs generated a record $1.5 billion in trading and grew 2,627 percent over the previous quarter.”

However, the NFT market in 2020 alone was valued at more than $20 billion. The Treasury suggested a possibility where criminals can purchase NFTs with illicit funds and resold to an unwary collector “who would compensate the criminal with clean funds not tied to a prior crime.”

NFTs can also be sold via peer-to-peer (P2P) sales, which bypasses the need for an intermediary or recording the transaction over the public ledger. While underscoring the various money laundering vulnerabilities made possible by the NFT ecosystem, the treasury concluded:

“Moreover, traditional industry participants, such as art auction houses or galleries, may not have the technical understanding of distributed ledger technology required to practice effective customer identification and verification in this space.”

Looking at the Ethereum price chart, we can see that ETH has dropped off marginally during the ongoing session. If sellers remain in control, we could see ETH slip below $3000, but ETH could push to $3050 and above if the price recovers.