The Ethereum price has recovered strongly over the weekend, with buyers looking to push ETH to $4400 during the ongoing session. ETH had registered a significant drop on Friday, dropping by over 10%, slipping below the 20 and 50-day SMAs and settling at $4045. ETH recovered over the weekend despite the bearish sentiment, rising by 1.31% on Saturday and then posting an increase of almost 5%, taking it back above the 50-day SMA and settling at $4298. 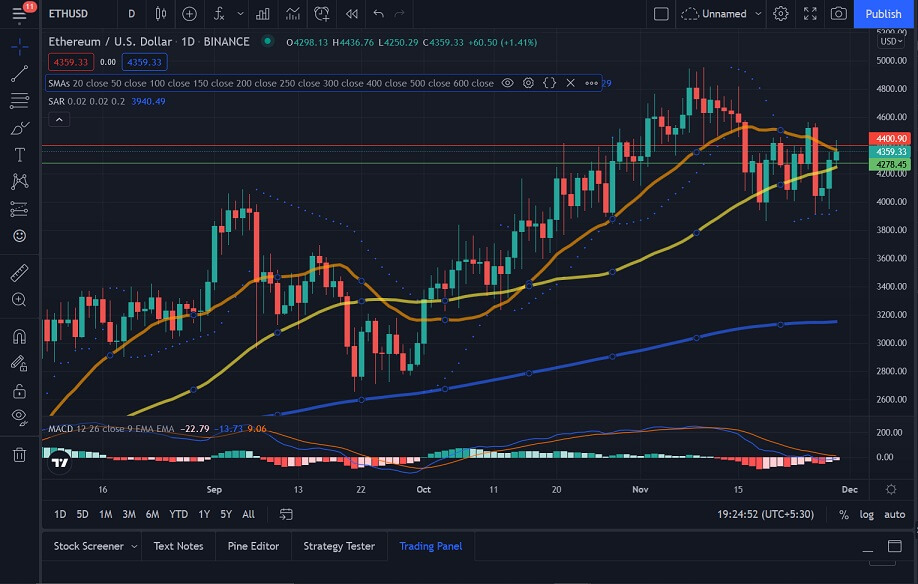 We can see that the Parabolic SAR is currently bullish, indicating that we could see ETH push towards $4400.

Looking at IntoTheBlock’s IOMAP for the Ethereum price, we can see that ETH has strong support at around $4296. At this price level, over 1.45 million addresses have bought more than 4.5 million ETH. 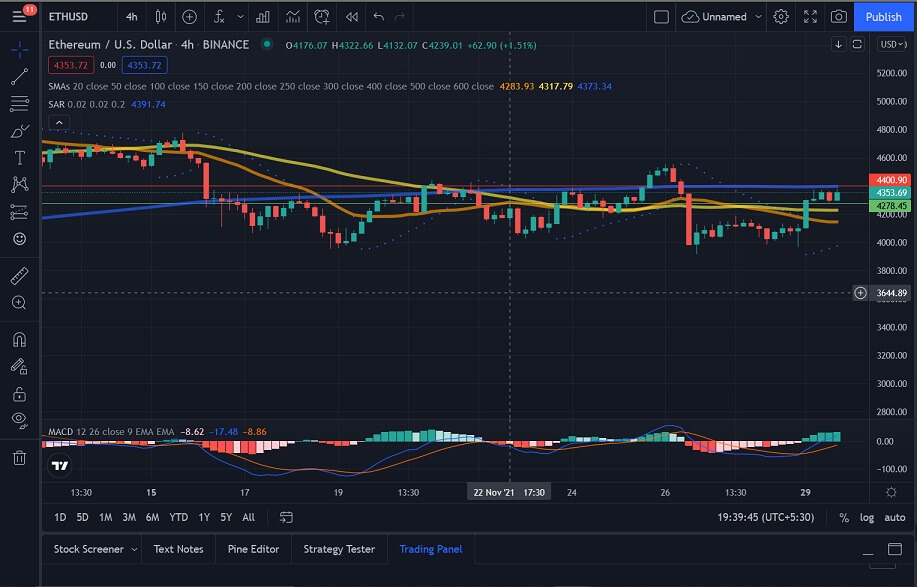 Monthly data for decentralized exchanges (DEXs) indicates that the ecosystem has seen nearly $100 billion in volume for November. According to The Block's Data Dashboard, the total for November was valued at approximately $99.5 billion as of November 28.

Monthly volumes have climbed since hitting a low for the year of $56.35 billion in July, with the November figure surpassing October's $89.15 billion. 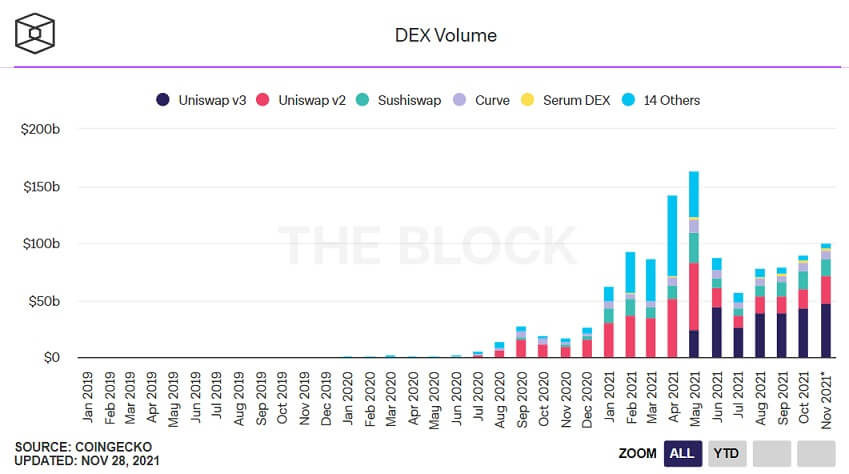 As expected, Uniswap v3 and v2 exchange protocols constituted the bulk of the monthly volume for November, reporting $47.37 billion and $24.07 billion, respectively.

Per CoinGecko, the USDC/ETH trading pair was the most active on Uniswap v3, accounting for around 654.4 million in volume in 24 hours. CoinGecko reports $1.49 billion in overall volume for the protocol in the past day. To date, monthly volumes peaked in May, when DEXs reported a total of $162.83 billion in volume.

In related news, a senior official for France's central bank said earlier this month that regulators in Europe need to more directly supervise the decentralized finance sector. Denis Beau, first deputy governor of the Banque du France, commented on the development of crypto-focused regulation in Europe and remarked that "other regulatory changes will have to be introduced which are also very important."

"I’m referring in particular to the supervision of the development of decentralised finance, where the usual regulatory frameworks are constrained by the fact that issuers and service providers are not easily identifiable in an environment where protocols are automatically executed without intermediaries, and there is no fixed jurisdiction for the services offered."

Will This Fix Ethereum’s Gas Problem

Ethereum co-founder Vitalik Buterin recently took to the Ethereum Magicians forum to suggest a way to reduce the gas costs associated with transaction call data on the network. His post noted the significant challenges posed by soaring gas costs, including the length of time it takes to deploy data sharding. These problems, according to Buterin, make a short-term solution imperative to “cut costs for rollups.”

He proposed adding a limit to the total transaction call data that can be in a block. His post revealed that an alternative method could be followed that did not involve adding a limit. However, this posed security challenges.

“Simply decreasing the call data gas cost from 16 to 3 would increase the maximum block size to 10M bytes,” said Buterin. “This would push the Ethereum p2p networking layer to unprecedented levels of strain and risk breaking the network.”

Buterin posited that “1.5 MB will be sufficient while preventing most of the security risks.” If his proposal is accepted, the network will require a scheduled network upgrade that will require miners to halt adding transactions into a block when the call data limit has been achieved.

Buterin noted that the worst-case scenario would be a “theoretical long-run maximum of -1,262,861 bytes per 12-sec slot or -3.0 TB per year.” Ethereum devs raised concerns about the proposed call data limit, saying that it could have several far-reaching and unintended consequences to the entire network.

Alex Krusz, an enthusiast, responded to Buterin’s proposition by calling for a soft limit instead of an arbitrary one. He said:

“While ostensibly simple, it could be argued that the call data limit is an architectural decision with greater implications than just modifying a gas constant,” said Krusz. “If there is an arbitrary limit imposed, why not make it a soft limit, or impose it on the entire block size rather than on call data specifically?”

Looking at the Ethereum price chart, we can see that ETH has made a strong recovery over the weekend. Although ETH faces strong resistance thanks to the 20-day SMA, if ETH can move past this, we could see it push beyond $4400. However, if sellers regain control, we could see the price drop to $4300.