The Ethereum price is marginally up as buyers and sellers struggle to establish control of the session. ETH had slipped below the 50-bar SMA on Thursday, falling to $3086 and then registering another significant drop on Friday, falling by just over 4% to $2959. On Saturday, the weekend saw ETH remain in the red before registering a marginal increase during the ongoing session.

Ethereum Price Chart Indicates ETH Looking To Push Back Above $3000

The Ethereum price registered a significant increase over the previous weekend, surging by over 11%, pushing above the 20-day SMA and moving to $2996 on Friday. ETH remained bullish over the weekend, rising by 0.62% on Saturday and then by 1.40% on Sunday to end the weekend at $3057.81. Monday saw ETH remain bullish, as the price rose to $3141, before dropping back on Tuesday, falling by 0.66% and settling at $3121. 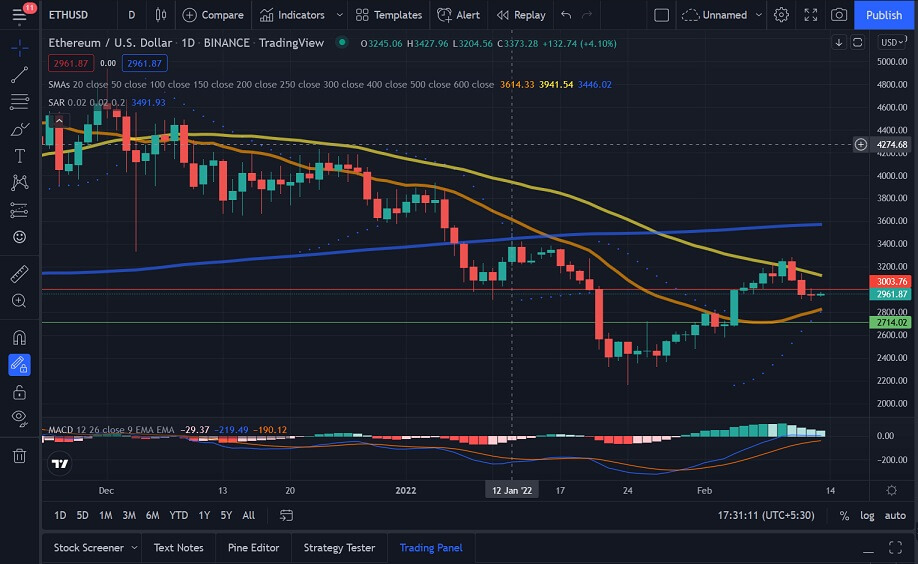 The Ethereum price recovered on Wednesday, pushing up by just over 4%, moving above the 50-day SMA and rising to $3247. ETH fell back on Thursday, dropping back below the 50-day SMA, dropping to $3086. Friday saw ETH continue to drop, falling by 4.09% and dropping to $2959. The weekend started with the bearish sentiment persisting, as ETH registered a marginal drop on Saturday before recovering during the ongoing session.

IntoTheBlock’s IOMAP for the Ethereum price shows us that ETH has strong support at around $2716. At this price level, over 862,000 addresses have bought more than 9.4 million ETH.

We can see that the MACD and Parabolic SAR are bearish, indicating that we could see ETH drop further. 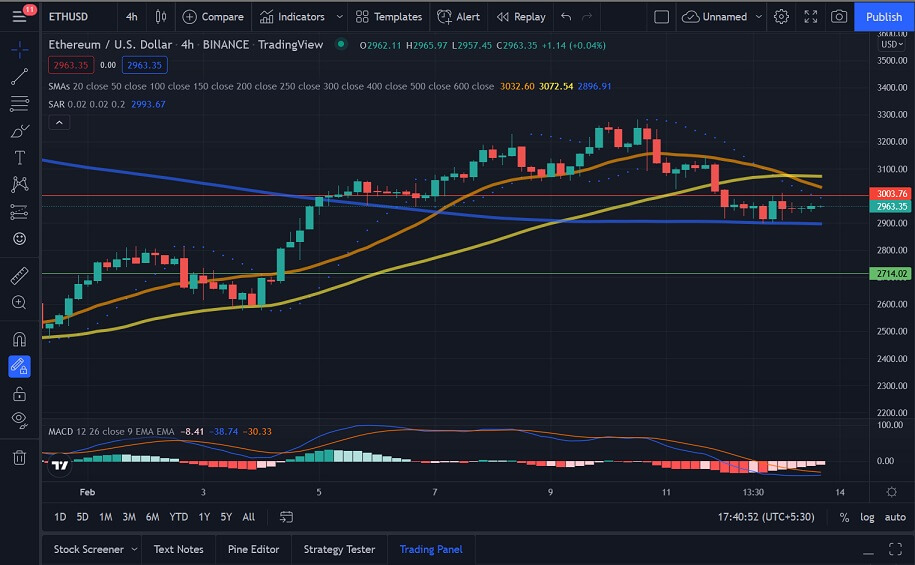 Ethereum (ETH), the world’s second-largest cryptocurrency by market capitalization, has seen its price climb in recent weeks, rising from as low as $2,200 to trading back over the $3,000 mark. Despite the recent market volatility, the CoinMarketCap community, with an 82% prediction accuracy, forecasts an optimistic outlook for Ether’s price at $3,632.42 by the end of February with 70,326 votes.

By March 31, 2022, the community predicted that with 38,140 votes, the asset would have increased to $3,850. The price projection indicates a bullish prognosis for Ethereum while the cryptocurrency is still around 30% behind its all-time highs. Notably, it was trading at six-month lows only last month.

Despite Ethereum’s bullish movements in the face of critical resistance levels, Bloomberg has discussed a bearish outlook for ETH. Bloomberg analysts have predicted that the price of Ethereum might go as low as $1,700 in their most recent Intelligence report.

“Our graphic depicts Ethereum moving toward the bottom of the range and nearing the support threshold about 30% below its 52-week moving average. Ethereum could repeat last summer and revisit about $1,700.”

ETH is headed towards sliding below the support barrier, which is located at price levels below its 52-week moving average, per technical indicators. According to the experts led by senior commodities strategist Mike McGlone, it has been determined that the ETH market is in a consolidation phase near the conclusion of its bull run.

Arbitrum continues to dominate the Layer 2 space by leading the market with total value locked. Arbitrum’s total value locked currently stands at over $3.3 billion, per L2 Beat. This metric has grown by 17% in the last week and 23% this year.

By comparison, the second-biggest Layer 2 product on Ethereum is dYdX, an on-chain derivatives trading protocol on Starkware with a TVL of $976 million. In other words, Arbitrum leads its closest competitor in TVL by a margin of $2.3 billion.

Key metrics also indicate growing on-chain activity on Arbitrum the past week. Per Arbiscan, the official block explorer of Arbitrum, total daily transactions on the network have doubled in the last week. In addition, there has been an uptick in the total number of unique Ethereum addresses that have transacted on Layer 2, which stands at over 383,720.

The demand for Layer 2s has skyrocketed over the last year. Offering scalable yet secure alternatives to the Ethereum blockchain, Layer 2s like Arbitrum, Optimism, StarkWare, and zkSync, take computation requirements of dApps off-chain and reduce the amount of data they process on the Ethereum Layer 1. In this way, dApps can achieve much-needed scalability while still retaining mainnet security.

Developed by Offchain Labs, Arbitrum helps reduce mainnet congestion for Ethereum smart contracts. Arbitrum’s $3.3 billion in total value locked (TVL) is justified by its rapidly-growing DeFi ecosystem, which consists of a healthy mix of DeFi staples like SushiSwap, Uniswap, Curve, and other native projects bootstrapped directly on it.

The Ethereum price chart shows us that ETH had pushed up marginally during the current session, although the price has been quite bearish in recent sessions. If ETH can maintain its current sentiment, we could see ETH push above $3000. However, if sellers retake control, ETH could drop towards $2900.