The Ethereum price is down by almost 3% during the ongoing session, as bearish sentiment continues to drive ETH lower. ETH had started the weekend on a bearish note, registering a marginal drop on Saturday and then falling by over 5% on Sunday to end the weekend at $2621. The bearish sentiment persisted on Monday, with the price falling by 1.98% to $2569 and then to $2519 during the ongoing session.

The Ethereum price was fairly bearish during the previous weekend, registering a marginal drop on Saturday and then falling by almost 3% on Sunday to end the weekend at $2872. At this level, the 20-bar SMA came into play as support, and ETH recovered on Monday, rising by just over 2% and settling at $2930. Tuesday saw ETH register a significant increase, pushing up by almost 9%, going above the 50-day SMA and settling at $3185. The price fell back on Wednesday, dropping by 1.97%, then registered a drop of over 7% on Thursday, dropping below the 50 and 20-day SMAs and settling at $2893. 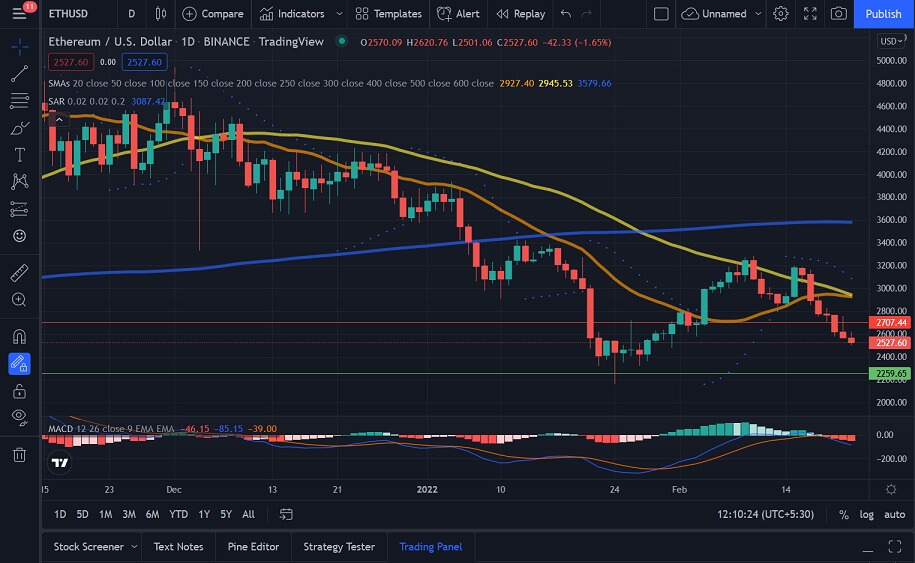 The Ethereum price continued to remain bearish on Friday, falling by almost 4% and registering a marginal drop on Saturday to settle at $2765. Sunday saw the bearish sentiment intensify as ETH dropped by over 5%, falling to $2621. The current week saw ETH remain in the red, with the price dropping by almost 2% on Monday, falling to $2569, and then dropping to $2525 during the ongoing session.

We can see that the MACD is currently bearish, indicating that the price could drop further during the ongoing session.

We can see that the Parabolic SAR and MACD are both bearish, but if ETH continues to push higher, we could see them flip to bullish. 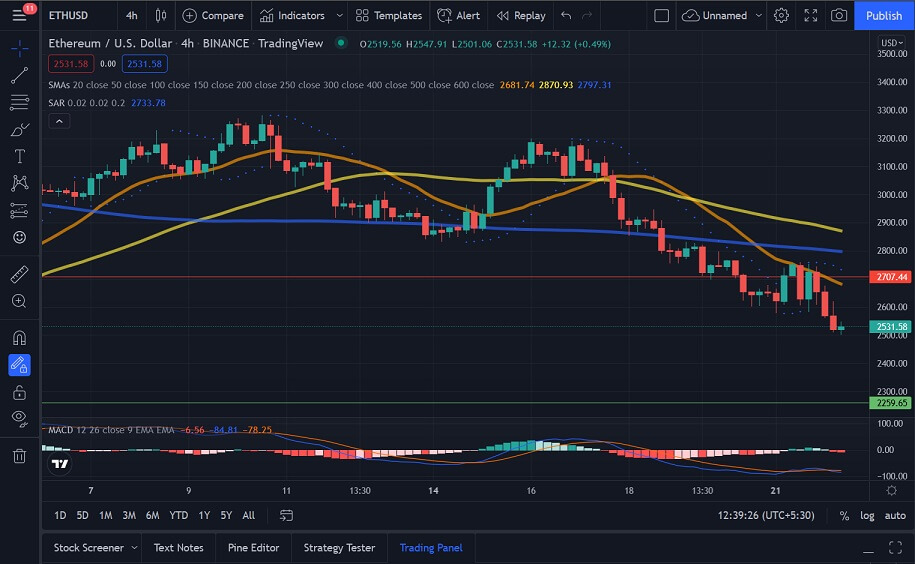 A now-former Bored Ape Yacht Club owner is entering uncharted territory this week and filing a lawsuit against leading NFT marketplace OpenSea. The move comes after the former Bored Ape owner was subject to an exploit on the platform that involved inactive listings, and led to hackers being able to ‘purchase’ the Ape for just 0.01 ETH.

A Texas resident filed the lawsuit late last week, asking for over $1M worth of damages or the rightful return of his Bored Ape #3475. The man alleges that OpenSea was aware of the bug on the platform that resulted in the 0.01 ETH sale of the Ape, which was not listed for sale by the owner when it was exploited.

The hacker received the Ape for 0.01 ETH and quickly resold it for 99 ETH, or around $250K at today’s going prices. The Ape is arguably in the top 20% of rarity; many Bored Ape Yacht Club NFTs in this level of rarity yield north of $1M, giving the dollar amounts in this lawsuit some serious credibility.

The complaint stated that “instead of shutting down its platform to address and rectify these security issues, Defendant continued to operate. Defendant risked the security of its users’ NFTs and digital vaults to continue collecting 2.5% of every transaction uninterrupted.”

Depending on how this case shakes out, there’s a substantial opportunity for this lawsuit to set a precedent of NFT lawsuits against marketplaces moving forward – and this will be a case for all emerging NFT marketplaces to keep a firm eye on.

According to Vkontakte’s technical director Alexander Tobol, Vkontakte will not create its own blockchain but will act as an intermediary while assisting with the implementation of the NFT and blockchain initiative.

“It is easy to create an NFT, then list it on an exchange. And here, our task as the largest service in Russia for interaction with [an] audience, with an incredible amount of user-generated content, is to provide this opportunity.”

Tabol stated that the emergence of NFTs is a universal solution for authors as the technology requires a guarantee of uniqueness and copyright in various countries. The development comes in the wake of the NFT marketplaces recording the minting of plagiarized content. To combat counterfeits, VKontakte plans to deploy a content ID system to verify the intellectual property of all downloaded music and video content.

The NFT plagiarism concerns emerged after the OpenSea marketplace revealed that 80% of NFTs minted for free on the platform are plagiarized. Elsewhere, the Cent marketplace suspended photo and audio NFTs over a high volume of counterfeit products.

Vkontakte’s venture comes after it emerged that social media giant Meta is also reportedly planning to add NFT features on Facebook and Instagram.

The Ethereum price chart shows us that ETH has been extremely bearish during recent sessions and had nearly slipped below the $2500 level before recovering marginally. If bearish sentiment persists, we could see ETH drop below $2500, but if ETH manages to recover, we could see the price move towards $2600.

Will Ethereum Price Double In 2022 Due To The Future Of DeFi?

What Might Happen If You Invest $100 In Ethereum (ETH) Today?

Is It Worth Staking Ethereum?

How to Make (or Lose) Money with Ethereum (ETH)?