Ethereum Technical Analysis: ETH Back In The Red, Could Slip Below $4000

The Ethereum price has registered a marginal fall during the ongoing session, as sellers look to push ETH back below $4000. ETH had pushed up significantly over the weekend, rising by over 2% on Saturday and settling at $3964. However, the price fell back on Sunday, falling by 0.95%, before pushing up by 0.45% on Monday, starting the week on a positive note. The price continued to push on Tuesday, registering an increase of almost 2%, before dropping back during the ongoing session.

The Ethereum price was extremely bearish at the start of the previous week, registering a drop of 8.49% on Monday. Despite the bearish start to the week, ETH recovered on Tuesday, rising by 2.08%. Wednesday saw ETH push up, rising by over 4% and settling at $4022. However, the price fell back in the red on Thursday, dropping by 1.56% and settling at $3959. ETH continued to drop on Friday, falling by almost 2% and settling at $3882. 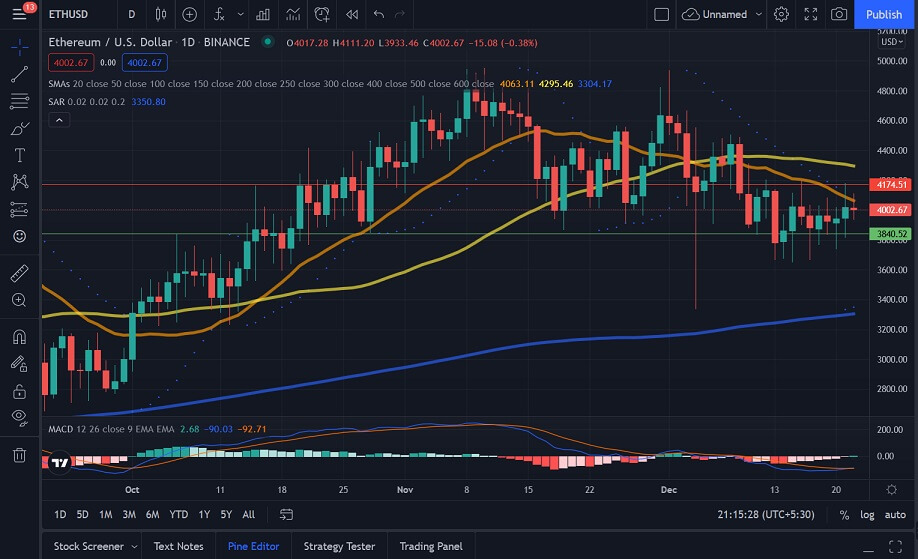 The Ethereum price made a strong recovery on Saturday, as it rose by over 2% and settled at $3964. However, the price fell back in the red on Sunday, dropping by 0.95% and settling at $3927. ETH was back in the green on Monday, starting the week on a positive note, rising by 0.45% and settling at $3944. The price pushed past $4000 on Tuesday, registering an increase of 1.84% and moving to $4017 before dropping during the ongoing session.

We can see that the MACD and Parabolic SAR have both flipped to bullish, indicating that the price could push higher.

IntoTheBlock’s IOMAP for the Ethereum price shows us that ETH faces strong resistance at around $4176. At this price level, 1.6 million addresses have sold more than 12 million ETH. 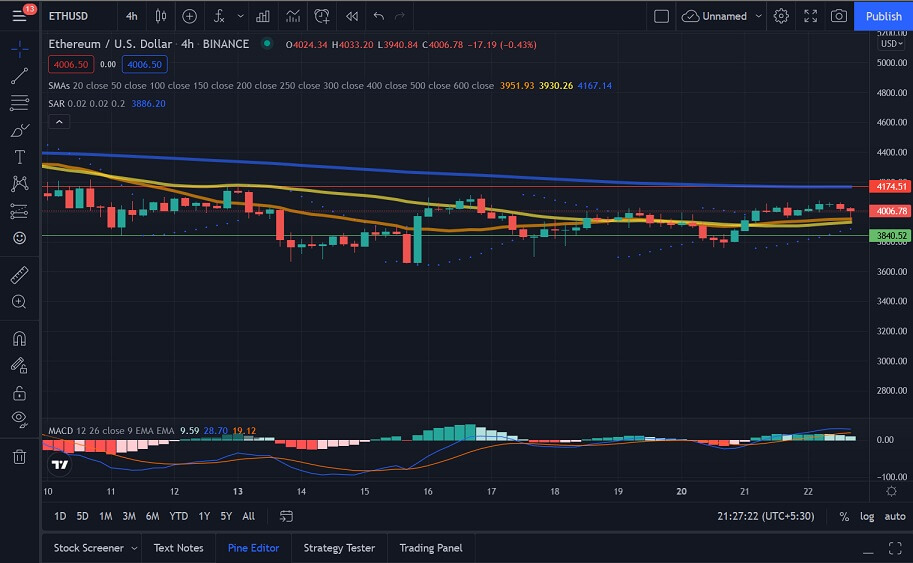 StarkWare, a firm aiming to scale Ethereum using Zero-Knowledge Rollups, has revealed that it is already planning Layer 3 chains. It plans to launch an additional off-chain computation layer on the existing Layer 2 network known as StarkNet.

In a blog post, StarkWare announced that Layer 3 chains would further improve the scalability of its blockchain infrastructure. Building on top of its main Layer 2 StarkNet, Layer 3s will provide “hyperscalability” and further drive down Ethereum gas costs.

The StarkWare team is also mulling the possibility of an additional Layer 4 for quadratic scalability, should it be deemed necessary. Due to a renewed architecture, StarkEx, its popular product that powers dApps such as dYdX, Immutable, and DeversiFi, will move to Layer 3. As a result, StarkEx will draw security from Ethereum by sitting on top of StarkNet.

Gidi Kaempfer, the head of core engineering at StarkWare, wrote that the revamped architecture for certain applications will meet the needs of “specific tailoring that may better be served by a new and separate layer.” Serving as Layer 2, StarkNet will validate multiple Layer 3s, each dedicated to various use cases.

The team has claimed that its new layer will make transactions roughly one million times less expensive than Ethereum’s Layer 1. This way, StarkWare will possess the ability to support high-throughput apps like games and social media.

MetaMask is in the middle of the ongoing DeFi boom as it is the most popular wallet. The team also teased about upcoming NFTs on the MetaMask browser extension. Non-fungible tokens have become the hottest topic of 2021, and the emerging play-to-earn field is also predominantly based and reliant upon them.

Thanks to the initial frenzied speculation and the subsequent foray of influential celebrities, big brands, and corporations, NFT google searches are eying to fetch a new all-time high. According to Google Trends, the interest for the keyword has continued to rise over the past year.

NFT search queries have surpassed Dogecoin even as the latter managed to capture the imagination of investors across the world. NFT search traffic has now neared Bitcoin after overtaking Ethereum in the first week of December. The latest data also showed that NFTs might also be on the verge of flipping “crypto” in the coming days.

NFT search traffic is dominated by China. Interestingly, this comes even after the People’s Bank of China official warned against the rapidly rising interest in NFTs and metaverse-related activities citing money-laundering concerns.

Looking at the Ethereum price chart, we can see that ETH has registered a marginal drop during the current session. If sellers manage to retain control of the session, we could see the price drop below $4000. However, if the price recovers, we could see it push to the 20-day SMA.