Ethereum Technical Analysis: ETH Looks To Push Back Above $4200

The Ethereum price is looking to test $4200 again, as buyers look to push the price during the ongoing session. ETH had dropped by 1.48% on Thursday, as the price dropped to $4517. Friday saw a significant drop, with ETH slipping below the 20 and 50-day SMAs and settling at $4222. The weekend started with the bearish sentiment prevailing on Saturday, as ETH dropped by 2.30% and settled at $4125. However, Sunday saw a recovery as ETH pushed up to $4202.

The Ethereum price started the previous weekend on a highly bullish note, rising by 1.15% on Saturday and almost 5% on Sunday, moving above the 50-day SMA and settling at $4298. Monday saw the bullish sentiment continue with ETH pushing above the 20-day SMA after rising by 3.51% and settling at $4449. ETH pushed up further on Tuesday, pushing up to $4635 after registering an increase of over 4%. However, after reaching this level, the price fell back, dropping by 1.07% on Wednesday and settling at $4585. 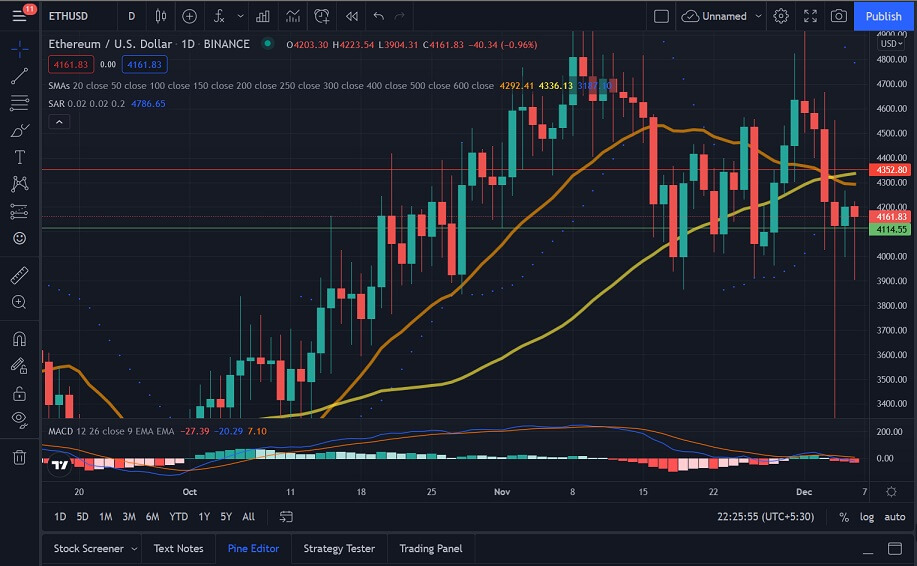 We can see that the Parabolic SAR is currently bearish, indicating the price could drop. However, ETh could push to $4200 if the price recovers from its support level of $4100

The 4-hour Ethereum price chart shows us that ETH had pushed above the 20 and 50-bar SMAs on the 29th when it rose to $4298. The price continued to push higher from this level, moving above the 200-bar SMA on the 30th and settling at $4449. ETH registered only a marginal drop after reaching this level, after which it rose to $4681. However, after reaching this level, the price turned bearish, dropping to $4489 and slipping below the 20-bar SMA. ETH stayed at this level for the next few sessions before registering a staggering drop on the 3rd, slipping below the 200 and 50-bar SMAs, slipping below $4000, and settling at $3874. The price recovered from this level, as it rose to $4207 before dropping to $4048.

We can see that the MACD has flipped to bullish, indicating that we could see ETH push higher. 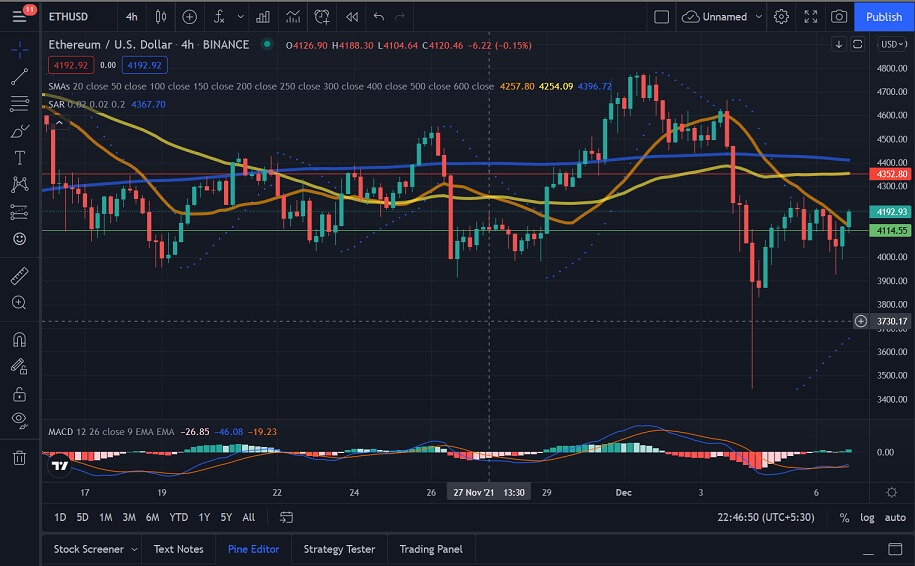 In a recent interview, former Goldman Sachs executive Raoul Pal talked about Ethereum and two of its (currently) faster and cheaper to use competitors.

Concerning the outlook for the price of Ethereum, Pal said that he believes ETH will hit $15,000 by the end of 2021.

“The small probability upside is that it hits $40,000 by the summer. That’s because [of] the staking cycle and how the charts look. And using the log chart, extending it forwards, and a number of things give me that. It’s not my base case; my base case would be $20,000 ETH by March at the latest.“

Before founding macroeconomic and investment strategy research service Global Macro Investor (GMI) in 2005, Pal co-managed the GLG Global Macro Fund in London for global asset management firm GLG Partners. Currently, he is the CEO of finance and business video channel Real Vision, which he co-founded in 2014.

And when asked if he was concerned that Ethereum had so many good competitors, Pal replied that it is normal for newer technologies to take over with time. Commenting on Solana, he said:

“SOL’s dominance versus others will diminish over time because this space is changing in structure. So I don’t have an issue with that. I’m not an ETH person. I’m just like this is the best horse to back, best risk adjusted return. I’m a crypto maximalist.“

Pal was then asked why he is invested so heavily in $ETH if he believes that Ethereum’s dominance over other L1 blockchains will fall in time. Pal answered that he thinks Solana and Terra will outperform Ethereum. But Pal noted that he has not invested in these two networks alone because “the network effects are less pronounced.” He added:

"So, therefore, I have to have a smaller bet, but I don’t think ETH stops going up. The whole space is going up 100Xover the next 10 years. So you can back a lot of different horses and still make money.”

Looking at the Ethereum price chart, we can see that ETH had dropped significantly over the weekend before posting a slight recovery on Sunday. Although ETH fell back again on Monday, the price has shown signs of recovery, and we could see it test $4200.