Ethereum Technical Analysis: ETH Looks To Recover After Dropping Over 12% On Friday

The Ethereum price fell back in the red during the ongoing session, as sellers look to push the price below $4000. ETH had registered a significant increase on Thursday, pushing above the 20-day SMA and settling at $4523. However, the price dropped on Friday as sellers pushed ETH below the 20 and 50-day SMAs to $4045. After posting a marginal recovery on Saturday, ETH fell back during the current session, with the price marginally down.

The Ethereum price started the previous weekend on a positive note, with the price pushing up by almost 3% on Saturday. The price fell back on Sunday, dropping by 3.50%, with ETH ending the weekend at $4262. Monday saw the price continue to drop, as sellers pushed the price below the 50-day SMA to $4089. The price pushed back up on Tuesday, rising by over 6% to push back above the 50-day SMA and settle at $4341. ETH dropped back on Wednesday, falling by 1.58% and settling at $4273. 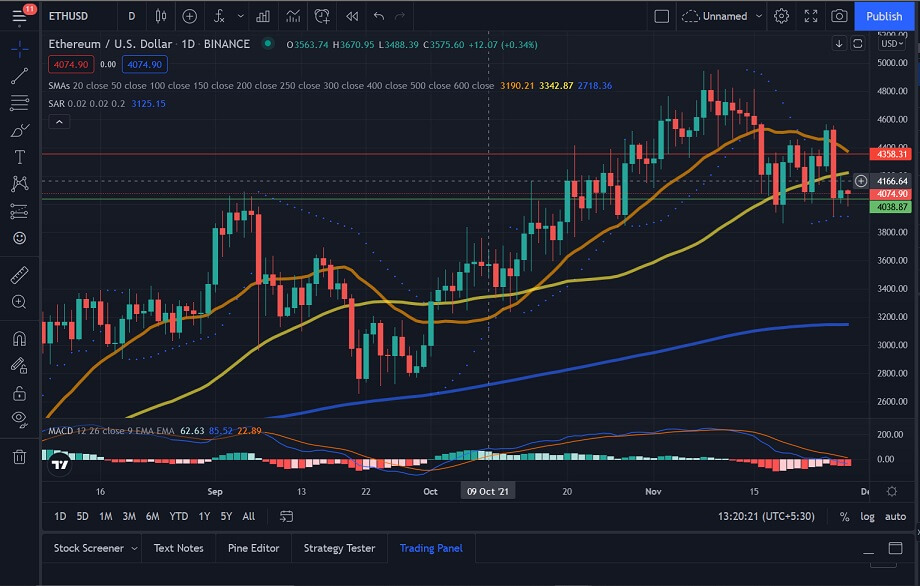 After dropping to $4273 on Wednesday, the Ethereum price pushed up on Thursday, rising by almost 6%, pushing above the 20-day SMA and settling at $4523. The price could not sustain itself at this level and fell significantly on Friday, dropping below the 20 and 50-day SMAs and settling at $4045 after a drop of 10.55%. ETH recovered on Saturday, as the weekend started on a positive note, rising by 1.31%, but fell back on Sunday, with the price marginally down by 0.70%.

We can see that the Parabolic SAR is currently bullish, indicating that the price could increase. However, if the price continues to drop, we could see it flip to bullish.

Looking at IntoTheBlock’s IOMAP for the Ethereum price, we can see that ETH faces strong resistance at around $4363. At this price level, over     1.2 million addresses have sold more than 10 million ETH.

The 4-hour Ethereum price chart shows us that ETH had slipped below the 20-bar SMA on the 22nd when the price dropped to $4168. ETH posted a marginal recovery from this level before dropping to $4067. The price rose significantly from this level, rising above the 20 and 50-bar SMAs to $4357. However, the 200-bar SMA came into play as resistance at this level, and the price dropped to $4248, where the 20-bar SMA came into play as support. ETH could stay at this level for the next few sessions before surging past the 200-bar SMA and settling at $4524. However, after reaching this level, the price turned bearish and registered a sharp drop, slipping below all three SMAs and the $4000 level to settle at $3986. The price pushed back above $4000 as ETH pushed up to $4137 before dropping to its current level of $4038.

The MACD is currently bearish, indicating a price drop, but if ETH pushes back above $4100, we could see it flip to bullish. 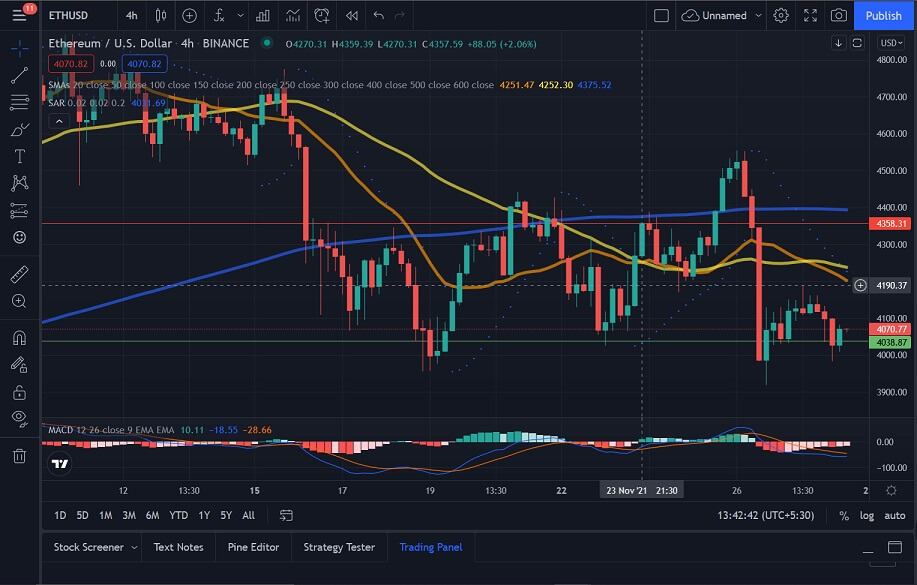 Looking at the Ethereum price chart, we can see that ETH had fallen significantly over the weekend. While the price is currently in the red, we could see ETH recover and push up above $4100.