The Ethereum price is looking to move past $2500 during the ongoing session. ETH registered a marginal increase during the ongoing session, with buyers and sellers looking to establish control. ETH had registered a significant drop on Saturday, falling over 6%, going below the $2500 level and settling at $2413. However, ETH recovered on Sunday, registering an increase of over 5% and moving to $2541, before dropping back in the red on Monday and falling to $2442.

The Ethereum price started the previous weekend in the green, registering an increase of 2.22% on Saturday and then rising by 0.63% on Sunday to end the weekend at $3349. ETH fell back significantly on Monday, as the price dropped over 4% to $3212 and then fell to $3161 on Tuesday, registering a drop of 1.60%. ETH remained bearish on Wednesday and Thursday, dropping by 2.39% and 2.65%, respectively. 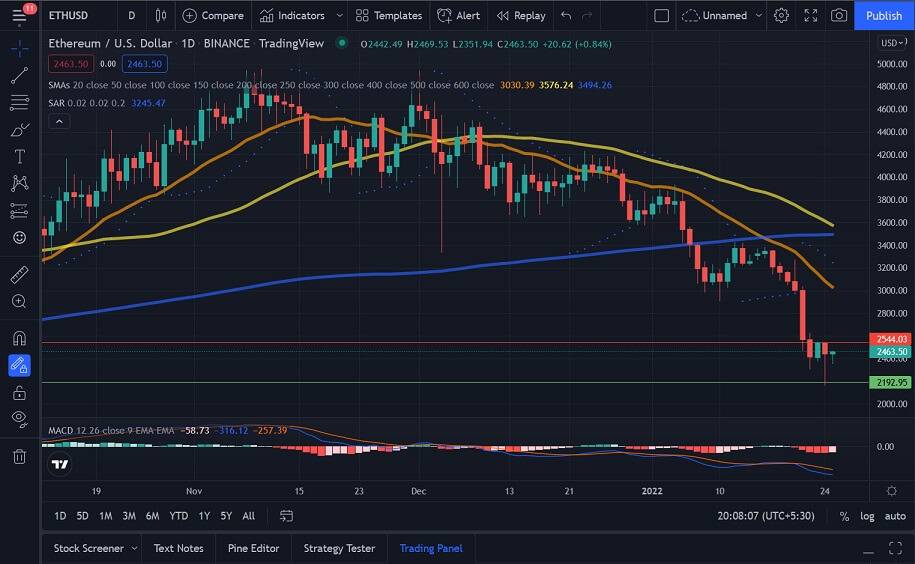 The Ethereum price registered a significant drop on Friday, as the price dropped over 14% and fell to $2569. The price remained bearish over the weekend, as it registered a drop of over 6% on Saturday, falling to $2413. The price recovered on Sunday, registering an increase of over 5% and ending the weekend at $2541. However, ETH fell back in the red on Monday, falling by nearly 4% to $2442, before registering a marginal increase during the ongoing session.

We can see that the MACD is currently bullish, but if the price manages to recover from its current level, we could see it flip to bullish.

Looking at the Ethereum price chart, we can see that ETH has strong support at around $2192. At this price level, over 394,000 addresses have bought 9.9 million ETH. 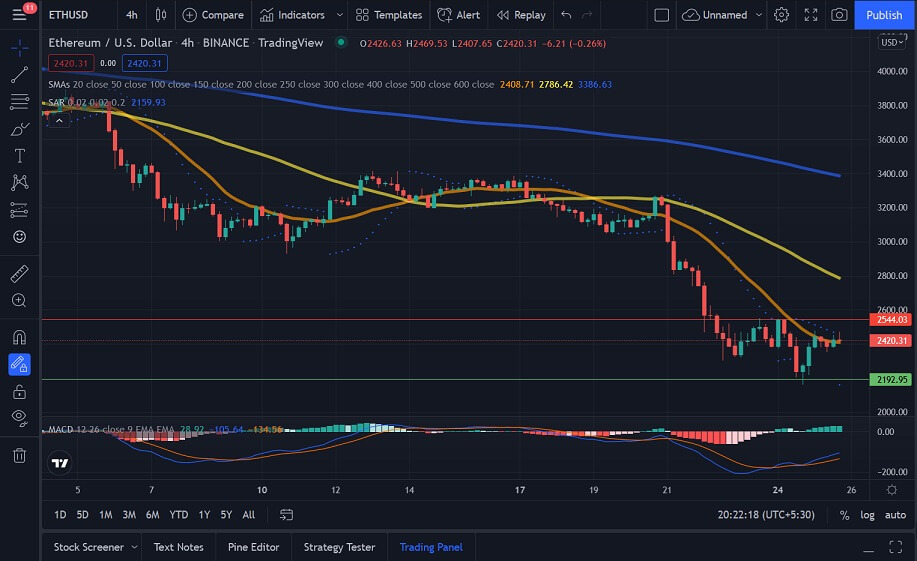 Why Ethereum Will Continue To Be A Market Leader, Coinbase Analysts

In a recent report from Coinbase Institutional, the exchange’s analysts highlight what could help Ethereum maintain its supremacy over other blockchains. ETH 2.0 has been in the works for a while, held back by several delays that rocked the project. However, developers have announced that they are back on track, and if everything continues as planned, ETH 2.0 may debut in 2022.

With the upgrade, Ethereum will enable faster and cheaper transactions. Once this happens, says the analysts, it will allow it to maintain its dominance over other networks that offer to do the same things at a cheaper and faster pace. The report reads:

“ETH 2.0 certainly holds the potential to disrupt and possibly dominate alternative L1s if it can manage lower fees and better network performance.”

In the interim, the report also noted that the much-anticipated Merge may not be what the majority thinks it is. While it is touted to come with better throughput and gas fees, there may not be much change to the network’s current challenges. For one, the speeds and higher gas fees are a result of the demand on the platform. The analysts said:

“So if activity on the network picks up after the merge, fees on the base layer actually have the capacity to rise.”

Despite the fact that the merge may not bring significant change if demand picks up after, it does not mean that the upgrade to ETH 2.0 is completely meaningless. Increasing throughput and significantly lowering gas fees and energy consumption are a large part of the upgrade but there are also gains to be seen in terms of the monetary policy of the network.

Looking at the Ethereum price chart, we can see that buyers and sellers are struggling to establish control during the ongoing session. ETH has fallen back into the red at the time of writing, but we could expect the price to recover and push to $2500.