Ethereum Technical Analysis: ETH Stabilizes At $3100, Could Recover From This Level

The Ethereum price is marginally up during the current session, as ETH looks to reverse a bearish trend that has driven the price down significantly. ETH had registered a sharp fall on Wednesday, as the price fell by 6.56%. ETH continued to drop on Thursday, dropping to $3408. Friday saw ETH slip below the 200-day SMA and $3400, as the price dropped to $3196 after dropping over 6%. The weekend saw ETH continue to drop, falling by 3.58% and settling at $3081.

The Ethereum price was quite bullish during the previous weekend, as it rose by 2.52% on Saturday, moving to $3767. The price continued to push higher, rising by 1.69% and settling at $3831. However, the price fell back in the red on Monday, dropping by 1.72% to $3765. On Tuesday, the price recovered, registering a marginal increase before falling back on Wednesday, dropping by nearly 7% and settling at $3536. 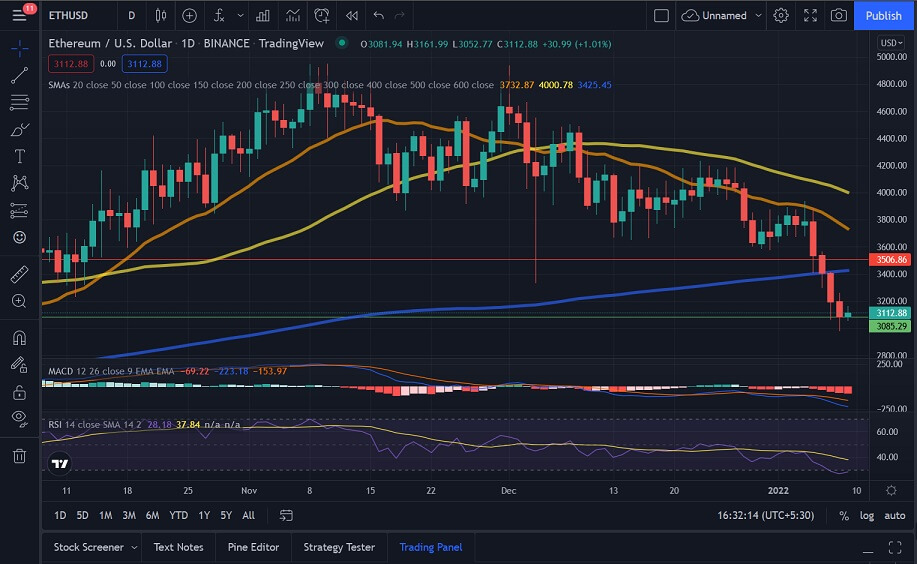 We can see that the RSI shows ETH has slipped below 30, indicating that ETH is oversold. This means we could see the price recover as buyers enter the market.

Looking at IntoTheBlock’s IOMAP for the Ethereum price, we can see that ETH faces strong resistance at around $3507. At this price level, over 886,000 addresses have sold 1.8 million ETH. 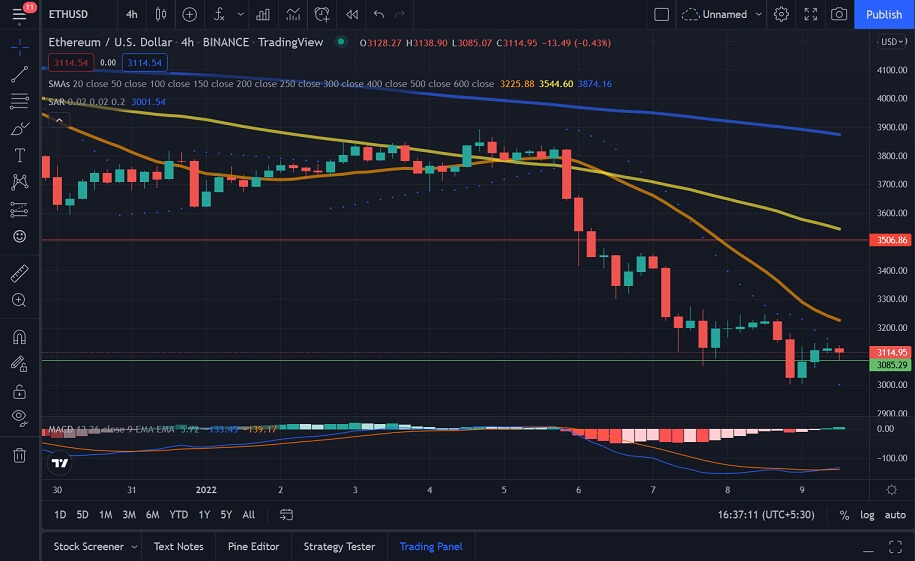 Bloomberg Strategist: Bitcoin And Ethereum Price To Rise To These Levels In 2022

Bloomberg’s senior commodity strategist thinks both Bitcoin (BTC) and Ethereum (ETH) will surge in 2022 despite the crypto market’s recent struggles.

In a new analysis, Mike McGlone said BTC and ETH have solid bases to build on. He predicted they would remain dominant among cryptos in 2022, with Bitcoin moving toward $100,000 and Ethereum breaching $5,000. McGlone thinks Bitcoin is in a “consolidating bull market.” According to him, the US Federal Reserve’s new policies will be beneficial for BTC.

Federal Reserve officials have recently indicated they plan to scale back asset purchases and raise interest rates next year in an effort to fight inflation.

“Expectations for Federal Reserve rate hikes in 2022 may support a win-win scenario for Bitcoin vs. the stock market… A reason to take back liquidity is the fact that the S&P 500 is the most extended above its 60-month moving average in over two decades.

Stretched markets have become common, but commodities and Bitcoin appear to be early reversion leaders. It’s a question of bull-market duration, and we see the benchmark crypto coming out ahead.”

According to reports, a popular pseudonymous whale 'Light,' recently said they believe Bitcoin has reached a bottom, and traders who sell at current levels are making a mistake.

Looking at the Ethereum price chart, we can see that ETH has registered a marginal increase during the ongoing session after spending the entire week in the red. If buyers can retain the session, ETH could push towards $3150-$3200.