The Ethereum price posted a strong recovery during the current session, rising by over 5% and moving past $4300. ETH was quite bullish over the weekend after it ended Friday at $4299. The price pushed further on Saturday, rising by almost 3% and settling at $4416. However, the price fell back on Sunday, ending the weekend at $4262. Monday saw ETH continue to drop, falling by over 4%, slipping below the 50-day SMA, and settling at $4089.

The Ethereum price chart started the previous weekend on a bearish note, dropping by 0.48% on Saturday and 0.44% on Sunday to end the weekend at $4625. Monday saw the price continue to drop, falling by 1.33% and settling at $4563. Tuesday saw a significant drop, as ETH slipped below the 20-day SMA and settled at $4212, registering a drop of over 7%. On Wednesday, the price recovered, pushing up by almost 2%, before dropping again on Thursday, falling by almost 7%, slipping below the 50-day SMA and settling at $3998. 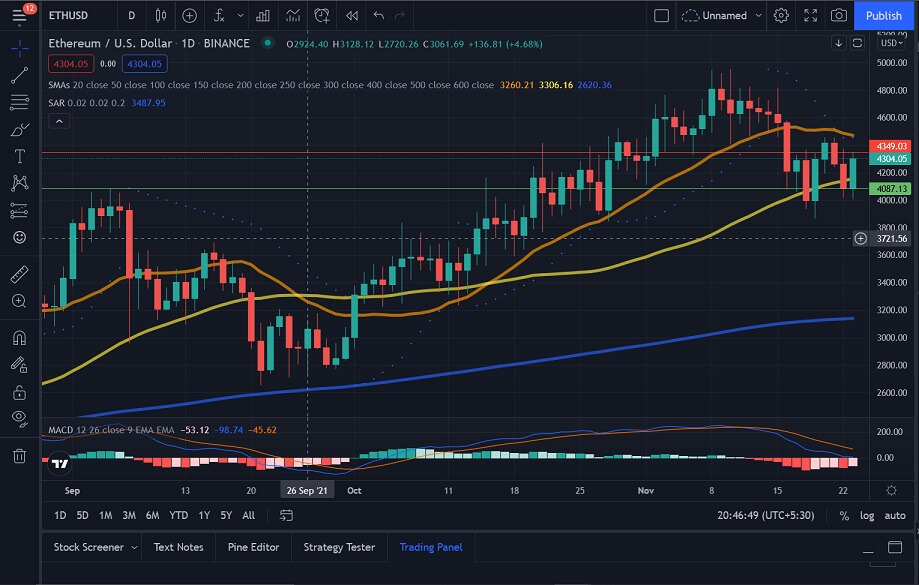 After slipping below $4000 on Thursday, the Ethereum price posted a strong recovery on Friday, as it rose by 7.52%, pushed above the 50-day SMA, and settled at $4299. ETH continued to push up on Saturday, as it rose to $4416 before dropping on Sunday and settling at $4262 after registering a drop of 3.50%. Monday saw the bearish sentiment persist as ETH slipped below the 50-day SMA and settled at $4089. However, ETH recovered on Tuesday, with the price currently up by over 5%.

We can see that the MACD is currently bearish. However, if the price continues to push up, we could see it flip to bullish.

Looking at IntoTheBlock’s IOMAP for the Ethereum price, we can see that ETH faces strong resistance at around $4348. At this price level, over 796,000 addresses have sold more than 9 million ETH.

We can see that the Parabolic SAR has just flipped to bullish, indicating that the price could push higher. 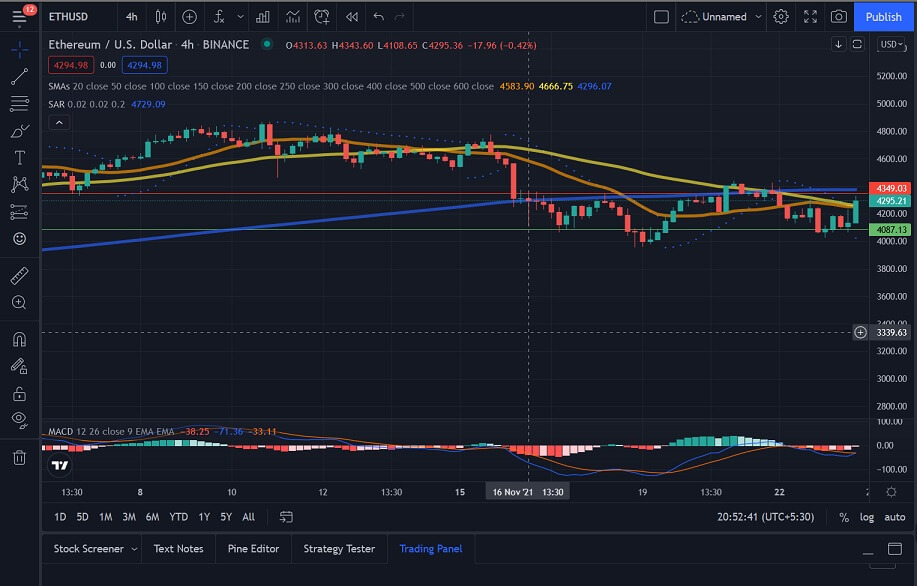 Martha Stewart, who was reportedly crowned "Queen of Thanksgiving" by Time Magazine, is back to launch 100 NFT images and an animated NFT called “The First Thanksgiving remembering 1994."

In addition to the story-based animated NFT, the collection on Martha Fresh Mint has images that appeared in back issues of Stewart’s popular home magazine Martha Stewart Living. The NFTs include images of pies, sandwiches, cornucopias, and strategically-arranged rooster sculptures in multiple styles.

The collection has a range of price points, from $100 for a photorealistic image to $1,000 for an impressionist rendition. Palette knife, watercolor, and oil painting restyle cost $500. The most expensive NFT in the collection is the animated NFT, which is currently up for auction on OpenSea. Bids for the piece start at 3 ETH.

In “The First Thanksgiving,” Stewart tells the story of a thanksgiving dinner with her family in 1994 New Jersey. Stewart has made animated NFTs before. Earlier, she sold an animation of her dressed up as a character from a Roy Lichtenstein painting for 1 ETH.

Stewart’s team has made a point of keeping their NFT site educational and beginner-oriented, with an FAQ section that answers questions like “What are NFTs?,” “What is a blockchain?,” and “What is a cryptocurrency?” at the bottom of each listing.

Looking at the Ethereum price chart, we can see that ETH has made a strong recovery during the current session, pushing past the 50-day SMA. If the current sentiment persists, we could see ETH push towards $4400.