Litecoin Price Analysis: LTC Surges Towards $250, Rises By Over 8%

The Litecoin price continued to push up during the current session, after ending Monday at $229.01. LTC has ended the previous week on a bearish note, as the price dropped to $197.80 on Saturday. The price recovered on Sunday, using the 20-day SMA as support, and pushed up to $202.15. The current week started on an extremely bullish note for LTC, with the price pushing up by over 13%, while the current session saw an increase of almost 8%, with the price pushing towards $250

Although the Litecoin price has been extremely bullish during recent days, it had started the previous weekend on a bearish note, dropping by 3.29% and settling at $190.27. The price recovered on Sunday, ending the weekend at $192.05. LTC continued its bullish trajectory on Monday, as the price rose by over 3%, settling at $197.83, before pushing past $200 on Tuesday. The price continued to push up on Wednesday, registering an increase of over 3% and settling at $207.37. However, after reaching this level, LTC fell in the red as sellers took control of the session on Thursday. 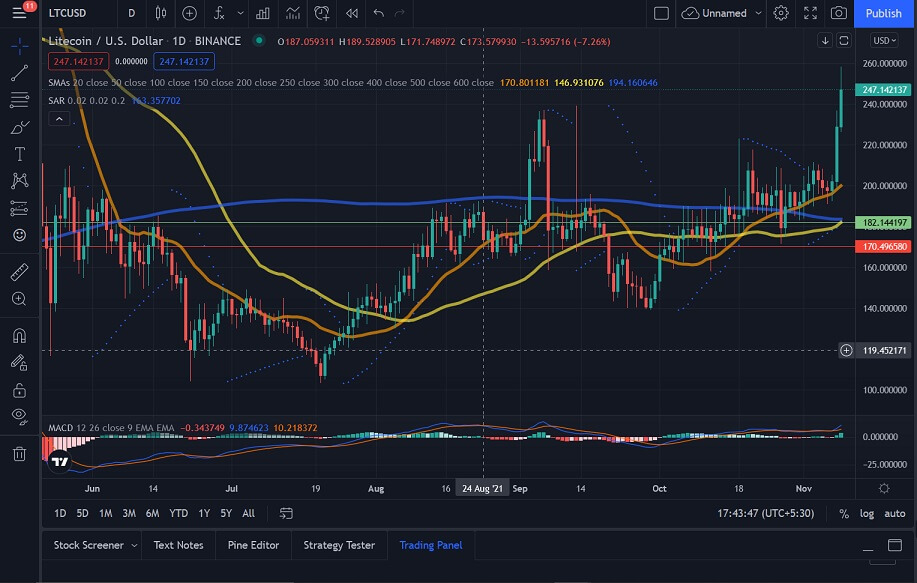 After pushing up to $207.37 on Wednesday, the Litecoin price fell into the red on Thursday, dropping by over 2% to $203.09. The price continued to drop on Friday, as LTC slipped below $200 and settled at $199.09 before registering a marginal fall on Saturday to settle at $197.80. With the 20-day SMA coming into play as support, the price pushed up on Sunday, registering an increase of 2.20%. The current week started on an extremely bullish note as LTC surged by over 13% on Monday, with the price rising to $229.01. The current session sees LTC up by over 8%, and with the Parabolic SAR and MACD bullish, we could see the price push higher.

Looking at IntoTheBlock’s IOMAP for the Litecoin price, we can see that LTC has strong support at around $213.50. We can see that over $40,000 addresses have bought more than 6 million LTC at this price level.

The 4-hour Litecoin price chart shows us that LTC had pushed up to $208.06 on the 3rd. LTC could maintain this price level for the next few sessions before the price dropped and LTC slipped below the 20-bar SMA, settling at $199.06. With the 20-bar SMA now acting as resistance, the price slipped to $197.94, where the 50-bar SMA was acting as support. As a result, the price rose to $200.19 before slipping below the 50-bar SMA and settling at $193.61. After dropping to this level, LTC made a strong recovery, rising to $199.02 and surging to its current $248. We can see that the Parabolic SAR and MACD are both bullish, indicating that LTC could push higher during the current session. 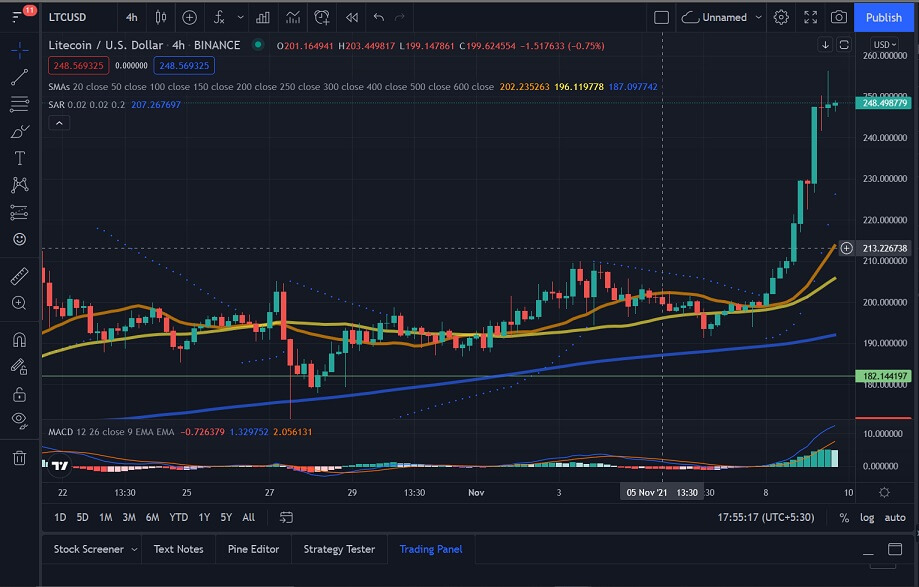 The Litecoin price chart shows us that LTC has made a very strong start to the current week, with the price currently up by over 8% during the current session. If the current trend persists, then we could see LTC push above $250.