Litecoin Price Prediction: LTC Drops As Markets Get Off To A Sluggish Start

The Litecoin price fell back during the ongoing session, as sellers forced the price down to $104 during the ongoing session. Currently, LTC is down by over 3%, with sellers in control. On Thursday, LTC had registered a marginal increase before recovering and rising by 2.26% on Friday, moving to $109.46. Saturday saw LTC continue to push higher, as the price rose to $110.86, before dropping back on Sunday and ending the weekend on a bearish note at $108.70. The current session sees LTC at $104, as sellers look to drive the price lower.

The Litecoin price got off to an extremely bearish start to the previous week, dropping by nearly 12% on Saturday. LTC continued to drop on Saturday, falling by over 5% and dropping to $108.42, before making a strong recovery on Sunday and ending the weekend at $112.37. However, Monday saw LTC back in the red, dropping over 2% and settling at $109.67, and then dropping to $107.85 on Tuesday. LTC continued to drop on Wednesday, registering a marginal drop of 0.80% after a fairly volatile session. 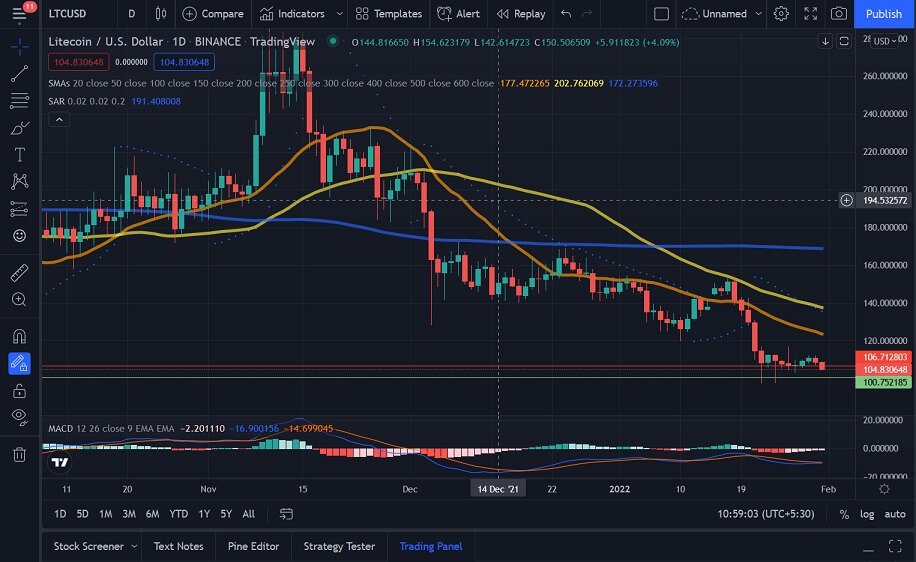 After registering a marginal drop on Wednesday, the Litecoin price recorded a marginal increase on Thursday and then rose by 2.26% on Friday and moved to $109.46. LTC continued to push up over the weekend, as it rose by 1.28% on Saturday and moved to $110.86. However, after reaching this level, LTC fell back, dropping by nearly 2% on Sunday and ending the weekend at $108.70. The current session sees LTC at $104, and with the MACD currently bearish, we could see the price drop further.

Looking at IntoTheBlock’s IOMAP for the Litecoin price, we can see that LTC faces strong resistance at around $106.56. At this price level, over 130,000 addresses have sold more than 5.8 million LTC.

We can see that the Parabolic SAR is bearish, while the MACD has just flipped to bearish, indicating that we could see the price drop further. 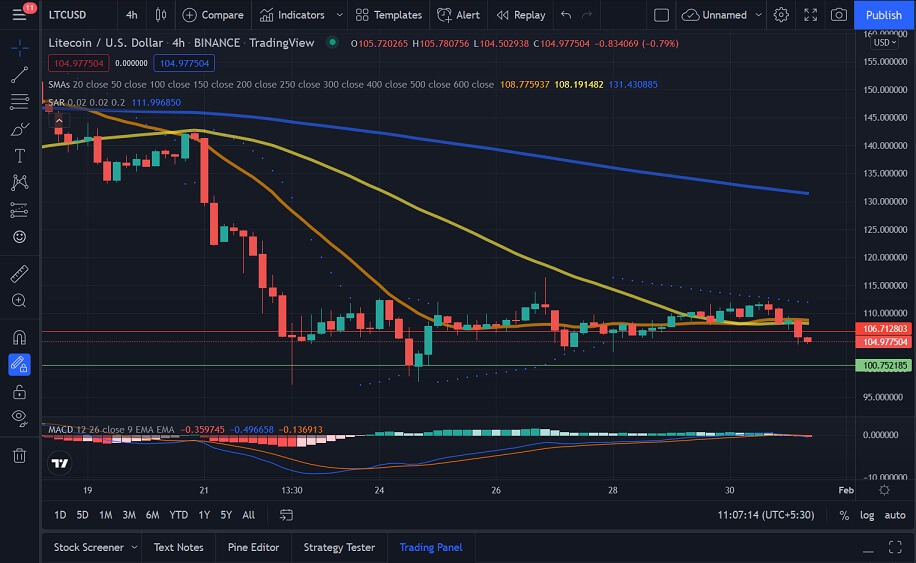 The Litecoin price chart shows us that LTC has dropped considerably over the past couple of sessions and is down by over 3% during the current session. If the current sentiment persists with sellers in control, LTC could drop towards the $100 level.