The Litecoin price fell considerably over the weekend, as sellers pushed the price below $200. LTC had ended Thursday on a positive note, with the price climbing up to $222.90. However, the price fell back significantly on Friday, dropping by over 12%, slipping below the 50-day SMA, and settling at $195.94. Saturday saw LTC remain in the red before it fell further on Sunday, dropping to $190. 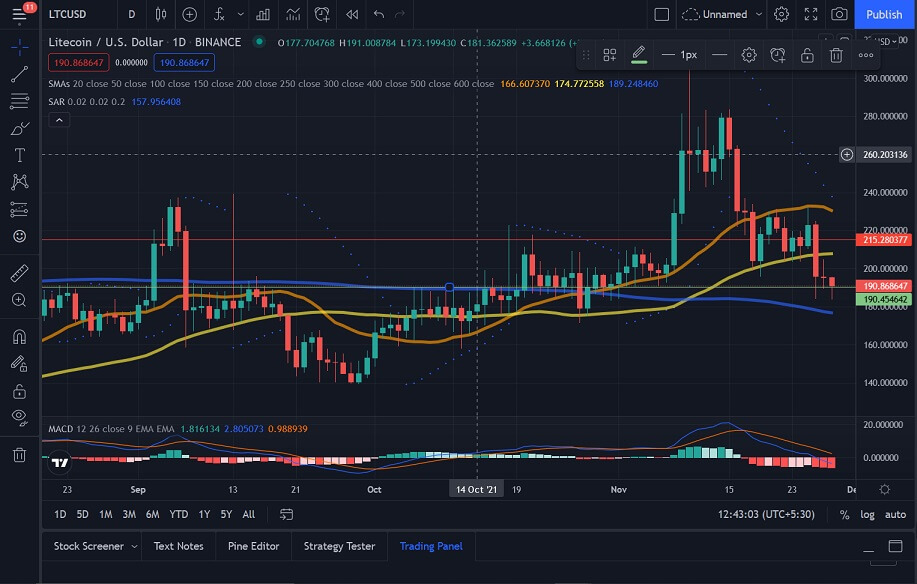 After falling back on Wednesday, the Litecoin price recovered on Thursday, rising by over 5% and settling at $222.90. However, bearish sentiment took over on Friday, as LTC fell by over 12%, slipping below the 50-day SMA and the $200 level to $195.94. LTC remained bearish over the weekend, too, registering a marginal drop on Saturday. Sunday sees the price still in the red, with LTC currently down by over 2% at $190.

We can see that the Parabolic SAR is currently bearish, indicating that the price could drop further. However, if the price recovers, we could see it flip to bullish.

Looking at IntoTheBlock’s IOMAP for the Litecoin price, we can see that LTC faces strong resistance at around $215.92. At this price level, more than 98,000 addresses have sold over 7 million LTC.

The 4-hour Litecoin price chart shows us that LTC had slipped below the 20-bar SMA and the 200-bar SMA when the price dropped to $206.72. With the 200-bar SMA acting as resistance, LTC could only push up to $216.36 before dropping back to $207.61. LTC surged from this level, pushing above all three SMAs and pushing up to $226.83. The price turned bearish at this level, as sellers pushed the price down significantly, with LTC slipping below all three SMAs and the $200 level settling at $191.51. The price pushed up to $198 but fell back to its current level of $190.

We can see that the MACD is currently bearish. However, if LTC recovers thanks to the support at $190, we could see it flip to bullish. 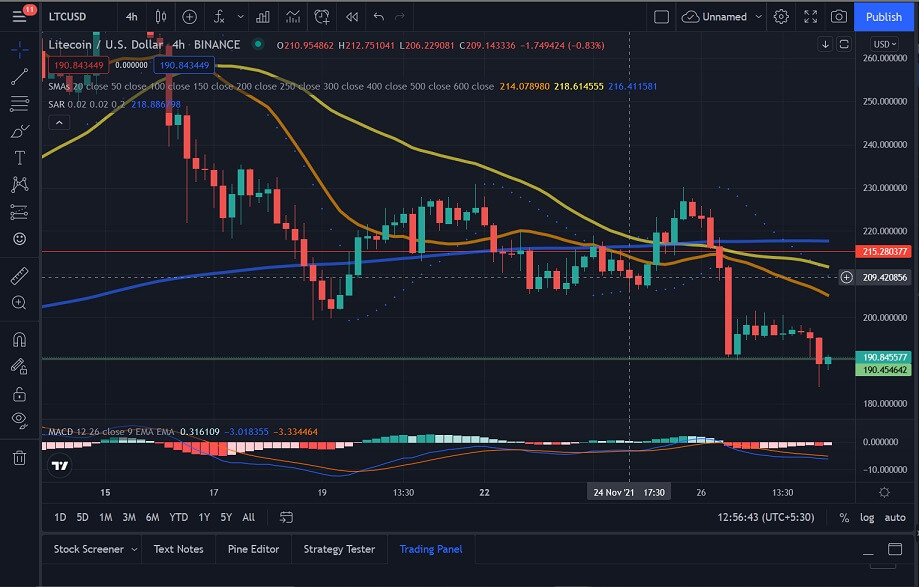 In a new report, the firm said that the investment products based on Litecoin and smart contract blockchain Solana had better returns than those based on BTC over the 30-day period leading to November 19th.

CryptoCompare said Bitcoin-based investment products recorded losses over the same period while products based on Ethereum and Solana registered profits.

The report also highlighted that the level of assets under management (AUM) for Bitcoin saw a significant drop on a month-on-month basis while the AUM for other crypto assets surged.

“Bitcoin AUM fell 9.5% to $48.7 billion in November, its largest month-on-month pullback since July. Meanwhile, Ethereum and other cryptocurrency products saw their AUM rise 5.4% to $16.6 billion and 10.4% to $2.6 billion, respectively.”

The decline drove Bitcoin’s market share as a percentage of the total crypto assets under management to fall month-on-month from 73.7% to 70.6% in November.

Looking at the Litecoin price chart, we can see that LTC has fallen significantly over the weekend. However, with some support present at $190, we could see the price recover and push towards $195.