Unless you’ve been living under a rock, you must know something about Microsoft. If not for any other thing, you should know Bill Gate, the Billionaire founder of the software company. He was ranked by Forbes as the world’s richest man for many years. He served as the CEO of Microsoft for many years but has resigned, even from the board.

You don’t need anyone to tell you that Microsoft is a big company. But you certainly need someone to help you understand how its shares have been performing in the stock market and how they will perform in the coming years. If you must invest, you need to know whether MSFT is a good investment option and whether it will suit your investment portfolio. We will provide the key information you need. All you have to do is read carefully and attentively.

If you want to buy Microsoft shares quickly and easily, with 0% Commission, check out eToro!

What You Need To Know About Microsoft Corporation 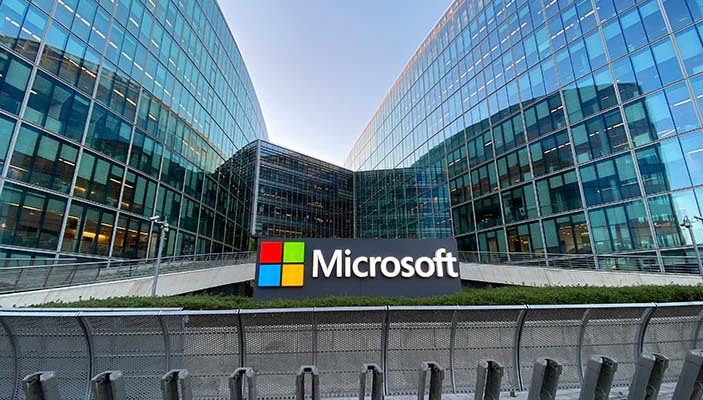 Microsoft Corporation is an American multinational technology company based in Redmond, Washington. It is one of the foremost computer software companies in the world and has expanded over the years to offer a wide variety of products and services in the technology market. In addition to computer software, the company specializes in personal computers, consumer electronics, and related services.

Microsoft was originally founded by Bill Gates and Paul Allen on 4th April 1975. The two childhood friends had previously founded Traf-O-Data in 1972, a predecessor of Microsoft. They also worked on a few other projects before setting up the company. Gate assumed the role of CEO and Allen remained with the Company until 1983 when he resigned after being diagnosed with Hodgkin's disease.

Over the years, Microsoft has developed some of the most widely used computer software across the world, including the Microsoft Windows line of operating systems, the Microsoft Office Suite, Internet Explorer, and Edge Web Browser. The company has also launched successful hardware products at different times, including special personal computers and the then-popular Xbox video game console.

Microsoft is recognized as one of the Big Five American Information technology companies, alongside Amazon, Apple, Alphabet, and Meta (formally Facebook). It is the oldest of the five but has remained relevant through the years. It has launched several new campaigns and made acquisitions too.

Price History Of The Microsoft Stock

Microsoft Corporation went public in 1986, offering its stock at a modest price of $21 per share. It has had nine splits since the successful IPO, and we will discuss its price history with reliable data from Yahoo Finance.

From the price history of Microsoft (MSFT) stock above, you can tell that the stock has had a wonderful time in the past few years. It has recorded incredible growth from 2018. However, you shouldn't bank on price history alone.

At this point, we need to look at price predictions from authority prediction sites that use the best algorithm and analytical methods.

Considering how Microsoft (MSFT) stock has performed in recent years, we expect that 2022 will still be a good year for the stock. Though the last couple of months have not gone as wonderfully as many investors would expect, there is still enough time for the stock to rise and yield meaningful returns.

According to data from CoinPriceForecast, Microsoft will be able to reach the $300 mark within the first six months of 2022. In fact, the MSFT price is expected to be $306 by mid-year and then climb to $312 by year-end.

Do you have a solid to invest in Microsoft (MSFT) stock this year? Then it is important that you have a good idea of what the price of the stock will be at different times of the year. We are going to consider MSFT's stock price predictions on a monthly basis for the present year, 2022. We will do that with reliable data from LongForecast.

For the last month of the year, December 2022, Microsoft (MSFT) stock is projected to record a minimum price of $342 and a maximum price of $386. It will eventually close the month/year at $364.

If Microsoft (MSFT) stock should perform as well as we expect in the remaining months of 2022, then it will be in a good position to consolidate the growth in 2023. Most authority prediction websites are also predicting that the stock will record positive growth in 2023. Wallet Investors' technical analysis projects Microsoft MSFT's 1-year forecast to be $362.197, which is a realistic value.

The data from CoinPriceForecast also shows a similar prediction for the Microsoft stock in 2023. According to it, the share will trade at $340 by mid-2023. By the end of the year, the price is expected to improve to $378 per share.

In 2024, it is expected that the Microsoft stock will start well and finish well. The price forecast shows that 2024 is the year the stock will reach the $400 mark. Microsoft is expected to trade at $407 by mid-year and then increase to $433 by year-end.

In 2026, Microsoft (MSFT) stock is also expected to consolidate on the gains it will make over the years and then shoot towards the $600 mark. Within the first six months of the month, the stock is expected to reach $557. It will then increase further and get to $607 by year-end.

Have you wondered what the price of Microsoft (MSFT) stock will be in the next five years? Our forecast shows that the stock can record more than 137% growth within the next five years. By mid-2027, MSFT is expected to be priced at $657. It will then improve further and reach $706 by year-end. Wallet Investors’ 5-year forecast also falls within this range. It is $656.315 per share, almost the exact figure we have for mid-2027.

While Microsoft stock is expected to have several wonderful years ahead, it is also possible that growth will stall at a time. In 2028, the stock will likely grow, but not at a fast pace. By mid-2028, the Microsoft stock's price is projected to be $733. It will increase marginally to $748 by year-end.

We expect that 2030 will be a special year for Microsoft (MSFT) stock, just as it will be for other stocks and investment vehicles. This is the year we believe the Microsoft stock will reach the $800 mark. Within the first six months, it is expected to achieve a new price of $797. This will improve from the seven months, and before the end of the year 2030, the Microsoft stock will trade at $815.

Should You Invest In Microsoft (MSFT) Stock?

From what we have discussed so far, it is easy to see that Microsoft (MSFT) stock has been a good investment vehicle for a long time. Though the stock has experienced downtrends at different times, it has grown considerably since it was launched.

Also, looking at our Microsoft (MSFT) stock price predictions for 2022 to 2030, you can see that the stock is poised to grow significantly in the coming years. There may be periods of stagnation, and the price can also fall from time to time. However, the Microsoft stock is expected to grow considerably over time.

The price history and predictions for MSFT should be enough to convince you to invest. Again, if you consider the prospects of Microsoft Corporation as a tech giant, you shouldn't be afraid to invest in its stock. The company has solidified its place in the computer software and related industries. It is well-positioned to grow and compete favourably with any other tech giant out there.

Overall, investing in Microsoft (MSFT) stock sounds like a very good idea. However, you must also realize that it comes with risks. Time your investment properly and always focus on your investment objectives, even when the market seems to be experiencing hitches.

From all indications, Microsoft is a profitable investment. It has grown significantly from the time the company went public. Our predictions also show that the stock will become more valuable in the future, therefore rewarding investors handsomely.

Yes, the MSFT is a good buy for 2022. This is even a great time to buy since the price has dropped slightly. According to our forecast, the price will start rising anytime soon, so it is best to start buying as soon as possible.

Is it too late to start investing in Microsoft?

Not at all. It is never too late to start making investments, especially when you want to buy the stock of an established company with so much potential. You might have missed out on some opportunities in the past, but buying now is still advisable since the stock will continue to grow.

Is Microsoft (MSFT) stock a good investment for the future?

Yes, Microsoft is well-positioned to achieve more in the future, so its stock is a good investment for the future. From the price prediction sections above, you can tell that the stock will bring meaningful rewards in the coming years.

Microsoft share will certainly reach the $500 mark in the future. In fact, the stock will likely hit that price as early as 2025, which is just three years away. There are chances that it can take less or more time. It all depends on market factors.

There is no good reason to believe that the Microsoft stock will not reach $1000 in the future. After all, the price had moved from $0.10 in 1986 to more than $300 in 2021. That is just a space of 36 years. The stock will certainly get to $1000. According to our predictions, however, this is unlikely to happen within the next ten years.

What will the Microsoft stock be worth in five years?

According to the reliable data we have, Microsoft (MSFT) stock price will reach $700 in five years' time. According to the current predictions, it should be priced at $657 in mid-2027 and then $706 by year-end.

What will the Microsoft stock be worth in the next 10 years?

It is expected that Microsoft (MSFT) stock will be pressing towards the $900 mark in the next ten years. The stock is expected to be priced at $897 by the end of 2032.

Will the Microsoft stock crash?

There is absolutely no reason to believe that the Microsoft stock will ever crash. The company is well-established and technical analysis shows that its stock will continue to grow in the foreseeable future.