Will AAPL go up or down? Find out below!

Investing in some of the best stocks around is one of the most proven ways to build wealth for the future. Apple stock has been around for a long time. Some of its earliest investors have seen their investments grow significantly over the years. However, that doesn’t mean you should rush in to buy the stock. It is important that you understand its history and consider its price predictions before investing.

In keeping with our tradition, we are not going to rush you through some figures. Rather, we are going to discuss Apple stock predictions in a detailed manner that will help you understand whether investing now or later will be favourable to you. We will also answer some questions that will help you take decisive action at the end.

If you want to buy Apple shares quickly and easily, with 0% Commission, check out eToro Exchange!

What You Need To Know About Apple Inc. 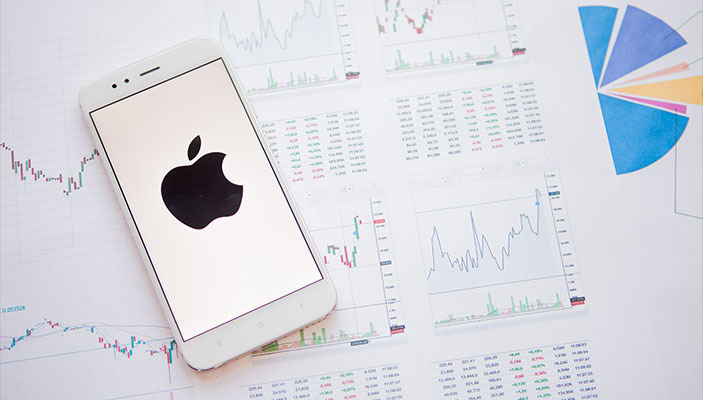 Apple Inc. is a foremost American multinational technology company that specializes in consumer electronics, software, and online services. Headquartered in Cupertino, California, United States, the company serves a global customer base. At the time of writing this piece, Apple holds the title of the world's most valuable company. It is also recognized as one of the Big Five American information technology companies, alongside Amazon, Alphabet, Microsoft, and Meta (formerly Facebook).

Apple is the second-largest mobile phone manufacturer in the world. Its iPhones are the most popular phone brand in the world. The company is also the fourth-largest personal computer vendor. Its consumer electronics products include the iPhone, iPod, iPad, HomePod, Apple TV, Apple Watch, Airpods, and Macintosh. The company also offers a range of exclusive services, including App Store, Applecare, Apple Music, Apple News+, Apple TV+, Apple Pay, Apple Card, and Apple Fitness.

Over the years, Apple has made progress in many ways. It has introduced some of the most critically-acclaimed products and launched some of the most memorable advertising campaigns. It has also acquired several companies along the way to become a true global giant. Apple’s founder and frontman, Steve Jobs resigned in 2011 for health reasons and died a couple of months later. He was succeeded by current CEO, Tim Cook.

Price History Of The Apple Stock

Now that you have good background information on Apple Inc., it is time to move forward and discuss the stock. The company went public on 12th December 1980, floating 4.6 million shares at an IPO price of $22 per share and sold out almost immediately. The stock reportedly rose more than 30% that day and eventually close at $29 per share.

Our historical data from Yahoo Finance dates back to 1985, so that is where we will start to discuss the price history of Apple's (AAPL) stock.

Apple (AAPL) stock dropped to around $3 in October 2008 and traded within that region until March 2009. By June 2009, it had reached $5 again and rose further throughout the year. It reached the $10 mark in August 2010 and has never dropped beyond that point ever again.

At this point, we are going to discuss the price of the stock going forward. we need to look at price predictions from authority prediction sites that use the best algorithm and analytical methods.

Depending on how well the Apple (AAPL) stock performs in the coming months, next year can also be a great year for its investors. We do not expect the price of the stock to fall at all, but there are prediction sites that anticipate only slight growth.

Wallet Investor's 1-year forecast for the Apple (AAPL) stock is $212.696. Though it is an improvement to the existing price, some analysts believe the stock will be priced higher in 2023.

One of the most reliable prediction sources at our disposal, Stock Price Prediction, has a brighter prediction for the Apple stock. It projects that AAPL will be priced at $227 within the first six months of 2023. Then the share will rise to $252 by the end of the year.

The New Year is still fresh, so we will start our Apple (AAPL) stock price predictions with 2023. The stock has performed relatively well in the last couple of years. It only fluctuates minimally, and we expect that the fluctuation will not affect its long-term forecast for the year. We don't expect that the price of Apple share will go down below the $150 mark again this year. Rather, it will rise towards the $200 mark. Apple (AAPL) stock may close at $225 by the end of the year.

If you are going to invest in Apple (AAPL) stock this year, then you need to study the price prediction on a monthly basis. To discuss the monthly predictions for this year, we will use data from Long Forecast.

Apple is an established brand that is not expected to encounter any major difficulty in the near future. Over the years, the company has demonstrated that it is one of the most reliable players in the consumer electronics and mobile device industries.

2028 is also expected to be a good year for Apple (AAPL) stock. According to the data we have, the stock can rally to reach $459 within the first six months of the year. In the last six months, it will grow slightly to close at $468 per share.

If Apple should continue growing at the pace it is growing, we expect that its stock will record more than 200% gain by 2029. It is expected that the price of Apple (AAPL) stock will reach $478 within the first six months of the year. It will then increase significantly to reach $488 by year-end.

Apple is one of the most innovative companies in the world and we expect that it will continue to do well. We also believe strongly that the price of its shares will increase by 2030.

According to experts' data, 2030 is the year Apple will hit the $500 mark. It is projected that the price of AAPL stock will reach $499 within the first six months of the year. In the last six months, the stock price is expected to rise to $510 per share.

Should You Invest In Apple (AAPL) Stock?

Apple Inc. is a global giant that has transformed the technology market in ways many couldn’t imagine many years ago. From the days of Steve Jobs to the moment, Apple has always been a leader and deserves all the recognition it has earned. It is difficult to find any reason to doubt the eligibility of the Apple stock as a good investment.

The Apple stock has performed relatively well over the years. Admittedly, it grew slowly in the early days, but its performance in the last decade is commendable. In the last couple of years, AAPL has become a very attractive stock. Our predictions also show that it is going to grow significantly in the coming years. It looks very much like a good buy, from an analyst's point of view.

It is important to also state here that investing in any kind of stock comes with risks. You must know that though the Apple stock looks very promising, there is a slight chance that it may not perform as well as projected. You must trade or invest cautiously.

AAPL has been a high-performing stock in recent times. It has gained considerably in recent times, yielding reasonable returns for investors. From our predictions, you can also observe that the stock is poised to gain more value in the coming years. From all indications, AAPL is a profitable stock for now. Going forward, it may become even more profitable as Apple continue to make some of the best consumer electronic devices and provide superior services.

Is Apple stock a good investment for the future?

As a company, Apple is well prepared for the future. The company has demonstrated over and over again that it is one of the most innovative players in the tech market. If it should continue on the path (which we believe it will), the AAPL stock will continue to soar. From what we know, Apple is going to improve its products and services even further, and its stock will even perform better in the future. In a nutshell, AAPL is a very good investment for the future.

As it stands, the Apple stock is a good buy for 2023. Though the stock was way cheaper some four or five years ago, it is still favourably priced. Considering that recent predictions show that the price of Apple stock is going to rise in the future, 2023 may be a good time to start buying. In fact, now may be a good time to buy as waiting may mean that you have to pay more for the stock.

Is it too late to invest in Apple (AAPL) stock?

It is never too late to buy any stock that has a future. It is true that people who bought AAPL years ago have enjoyed stunning ROI, the truth is that those who will buy this year still stand a good chance of profiting from the investment in a few years to come.

Is the Apple stock overvalued?

No, Apple stock is not overvalued. The price has increased significantly in the last couple of years, but there is no reason to believe that it is overpriced. Though some may consider it expensive, it is worth every dollar you will have to pay and even more. Considering what Apple has achieved and what it can achieve, there is no reason to believe that its stock is currently overvalued.

Will the price of Apple stock rise or go down in 2023?

Based on our Apple (AAPL) stock historical data and price predictions, the Apple stock is going to rise. Even though we expect some upswings and downtrends from time to time, the stock is more likely to gain over time. Its growth phase is going to last for the foreseeable future.

What will AAPL be worth in 10 years?

Yes, the Apple (AAPL) stock has the potential to reach $500. However, that is unlikely to happen within a year. According to our predictions, the stock will be able to reach that mark in 2030.

Yes, AAPL can reach $1000 in the future. According to our projections, it will take time for the stock to rise to this height. It may take more than ten years, but it is almost inevitable unless some serious economic issues arise. It is also possible that the stock will grow faster than we expect and reach $1000 faster.

It is unlikely that the Apple stock will ever crash. Considering how far the company has gone and how long the stock has been traded, it cannot just crash. According to our analysis, this will never happen.

trading/investing in stocks comes with risks and uncertainties. Though we can predict the future prices of stocks, there is no guarantee that they will move exactly as we have predicted. Like all volatile assets, AAPL can be categorized as a risky investment, but it is less risky than cryptocurrencies and several other stocks out there.

It’s important to remember that Stock investing is always risky, regardless of what the analysts say. Always carry out your own due diligence and ensure you have a robust risk management strategy in place before adding any asset to your portfolio.