If you are interested in buying the best tech shares in the world, then Alphabet (GOOG) stock must be one of your first options. Google is undoubtedly the most important name for most internet users, and from all indications, it is going to win more and more in the coming years.

Though Alphabet and Google are giants by all standards, you should never rush into buying a stock. It is important that you study every investment option properly before investing, and one of the best resources for you at the moment is this Alphabet (GOOG) stock price predictions for 2022 to 2030.

If you are really interested in buying Alphabet (GOOG) stock, then you should read on attentively. We understand the importance of understanding stock price predictions, so we will present the right information you need in a detailed manner that anyone can comprehend.

If you want to buy Alphabet shares quickly and easily, with 0% Commission, check out eToro!

What You Need To Know About Alphabet 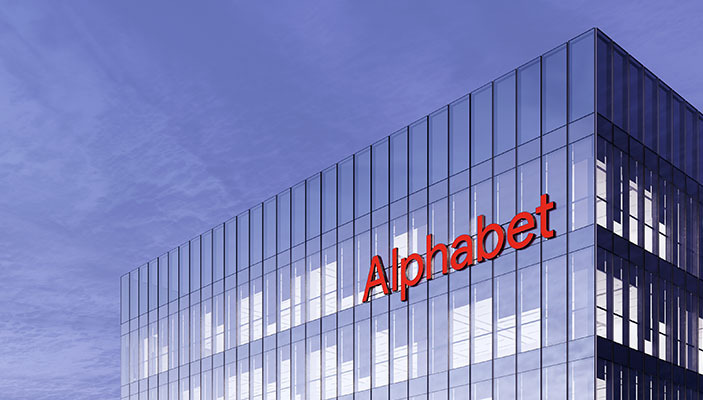 Alphabet Inc. is an American multinational technology conglomerate holding company that was created when Google was restructured in 2015. It is currently the parent company of Goggle and a number of other subsidiaries of Google in the past.

Alphabet is still primarily owned by the co-founders of Google, Larry Page and Sergey Brin, though they have resigned from their executive roles. They are still controlling shareholders, board members, and employees, but the current CEO of Alphabet and Google is Sundar Pichai.

Alphabet is one of the most valuable companies in the world. It is among the Big Five American information technology companies, alongside Apple, Microsoft, Amazon, and Meta (formerly Facebook). Alphabet is also recognized as the third-largest tech company in the world, by revenue.

Google remains the most popular brand in Alphabet, but there are several other well-known brands of the holding company, including Google Fiber, DeepMind, Calico, CapitalG, GV, Intrinsic, Waymo, Verily, X Development, Wing, and Isomorphic Lab. The holding company was formed because the owners wanted to make Google's business "cleaner and more accountable" while allowing other group companies to operate autonomously and efficiently in their respective industries/markets.

Ready to Invest in Alphabet stock?

You can tell from the paragraphs above that Alphabet (GOOG) stock has been growing consistently. Now it is time to look at how well it can grow going forward. Is it going to maintain the growth momentum or is it going to slow down in the coming years? The next sections will take care of that.

Now, it is time to check what the price of Alphabet (GOOG) stock will be in the future, and we will start from the current year, 2022.

Alphabet (GOOG) stock performed really well last year and we expect that it will perform decently this year too. Though the current price shows a noticeable decline from the value it attained last year, there is a general feeling that the stock will still pick up as the months roll by.

According to forecasts, Alphabet stock’s price will be around $2,718 by mid-year and improve slightly to $2,735 by year-end. There is also a good chance that the price of GOOG will touch the $3,000 mark at some point, especially towards the end of the year.

If you are planning to invest in Alphabet (GOOG) stock this year then you need to know what the stock will be worth at different times of the year. To discuss the monthly predictions, we will need to reference data from longforecast.com.

Google and its parent company, Alphabet, are expected to earn more this year, even as the technology market continues to expand. If the company's earnings improve significantly by the end of the year, then 2023 will be an interesting year.

As it stands, Wallet Investor’s Alphabet (GOOG) stock’s 1-year forecast is $3,271. Considering the rate of growth over the years, this is a realistic prediction.

CoinPriceForecast is almost as optimistic as Wallet Investors about how much the Alphabet (GOOG) stock can gain in the coming year. It predicts that the stock will be worth $2,774 by mid-year 2023 and then $3,201 by year-end.

It is expected that Alphabet (GOOG) stock will start 2024 at about $3,201 and then soar to $3,357 within the first six months of the year. It is also expected to grow further and then finish the year around $3,861. Of course, the maximum price for the year can be higher than the figure here, depending on how well the company performs.

The 45 analysts offering 2025 price forecasts for Alphabet (GOOG have a median target of $4300, with a high estimate of $4500 and a low estimate of $4010. The average estimate represents a 92% increase from the current price.

2026 is also expected to be a very good year for Google and other subsidiaries under the Alphabet conglomerate. On that note, the price of Alphabet (GOOG) stock is expected to be $4822 by mid-year and then increase to $5,256 by the end of the year.

Have you ever what the price of Alphabet (GOOG) stock will be in five years? Well, 2027 is five years ahead, and Alphabet is expected to become a lot more profitable by that time. Considering the importance of this period, we will consider predictions from two sources.

For Alphabet (GOOG) stock price forecast in 2030, we will still reference the reliable data from experts.

Should You Invest In Alphabet (GOOG) Stock?

Google has dominated the internet for several years. The foremost tech company had also diversified significantly to other profitable niches, even before the owners established Alphabet to serve as the holding company. It is now well-positioned to take advantage of recent tech trends and grow even bigger in the future.

It is also important to note that Google stock has been one of the most consistent gainers in the tech sector for years. From the price history we discussed above, you can see that it has grown from an IPO price of $85 to its current price of more than $2500 per share in just 17 years and a few months. Looking at the price predictions sections above, you can see that industry experts expect the Alphabet (GOOG) stock to gain more in the future. Obviously, it is a good buy.

Are you planning to buy Alphabet (GOOG) stock this year? You can go ahead as it appears like an all-round good investment.

Are Alphabet and Google the same company?

Alphabet Inc. is the holding company for Google and other brands that were formerly under it before it was restructured in 2015. Though the two names are often used interchangeably, Alphabet is the major international multinational that controls Google and several old and new subsidiaries. The Google (GOOG or GOOGL) stock, however, is the same thing as the Alphabet (GOOG) stock.

Alphabet (GOOG) stock has been a very good investment. Google was a highly profitable company before restructuring to make Alphabet the holding company. As a group, Alphabet is generally profitable. The stock has also been gaining value consistently, making it a very attractive investment option. Overall, it is a profitable investment.

Is Alphabet (GOOG) stock a good investment for the future?

Is the Alphabet (GOOG) stock overvalued?

Though Alphabet (GOOG) stock is seen by many as being expensive, it is not really overvalued. The shares price may not be a true reflection of market conditions, but you also need to factor in expectations for the company's future. Google and other subsidiaries of Alphabet have massive potential, so it is okay to believe that the value of Alphabet (GOOG) stock will continue to gain for a long time.

Will investing in Alphabet (GOOG) stock make me rich?

Investing in stocks, generally, will help you to build wealth for the future. It is possible, however, that you can become rich from stock investing but you will need to buy the right stocks. Considering how well it has grown over the years and the current predictions, Alphabet (GOOG) stock has the potential to yield significant returns. However, you should view it as an asset that will automatically make you rich in the coming years.

From all indications, the Alphabet (GOOG) stock can reach $10,000 in the future. Based on the data we have at hand, it will take a long time for this to happen, but it is almost inevitable. We don't expect Alphabet (GOOG) stock to be worth $10,000 before 2030, but it will certainly get to that range maybe within the next ten years.

Stock investing is generally considered risky, so there is always going to be an element of risk in buying Alphabet (GOOG) stock. However, it is important to clarify that the stock is safer than most other stocks out there. Based on its historical price data and price predictions, it is going to gain value with time and reward investors. It is not as volatile as most other stocks, and certainly safer than cryptocurrencies.