Polkadot Cryptocurrency: How It Works and Where to Buy?

Polkadot (DOT) is known as the United Nations of Blockchains due to the protocol’s vision of bringing all competing chains together to help make the use of the decentralized web easy and exciting.

After being founded by Ethereum (ETH) co-founder Gavin Wood in 2016 and having raised $140 million through its Initial Coin Offering (ICO) in October 2017, the blockchain project has performed extremely well when compared to other projects which has so far failed to hit the ground running.

Polkadot (DOT) is primarily referred to as an open-source sharding multi-chain protocol that facilitates the cross-chain transfer of any asset, data type or money and NOT only tokens, and in the process makes several blockchains interoperable with each other.

According to Jake Frankenfield of Investopedia, Sharding is a database partitioning technique which is used by blockchain companies (such as Polkadot) with the purpose of scalability in mind which enables them to process more transactions per second (TPS). Overall, Sharding can help with the reduction of the slowness or latency of a network since it splits a blockchain network into separate shards.

Interoperability in the definition of Polkadot means the ability of blockchain networks and systems to work in tandem across organizational boundaries with a view towards advancing the web of decentralization. This means that developers who make a decision to connect their blockchain to Polkadot will have the benefit of being able to interoperate with a wide variety of blockchains on DOTs network.

The cross-chain platform is extremely different from other networks such as Ethereum, Cardano and Tron; it does not use smart contracts but relies on the functionality of various blockchains to operate.

Since decentralized finance (DeFi) took hold of the financial market, several software developers have joined the crypto finance space creating a saturated market where every blockchain aims to use smart contracts to dethrone one another and eventually become the dominant force in the blockchain space.

By connecting public and private chains, oracles, future technologies and permissionless networks, Polkadot allows developers to share information and transactions trustlessly through one of the technology’s core areas called the relay chain.

DOT as the native currency of the ecosystem of Polkadot (DOT) plays several roles but it is known for its use in governance, bonding and staking.

How Does Polkadot (DOT) Work? 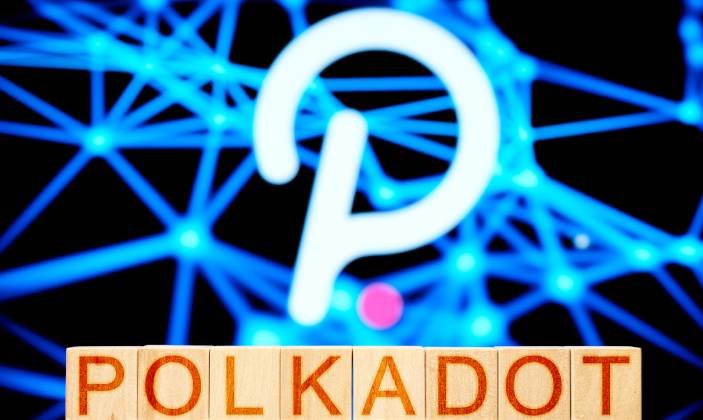 Polkadot is a macrocosm of public and private blockchains which can interact with one another through its unique feature called INTEROPERABILITY. On its digital address (website), it is written “True interoperability enables cross-chain blockchain transfers of any type of data or asset, not just tokens”.

Unlike other blockchain networks which run decentralized applications or protocols (DAPPS) through smart contracts, PARACHAINS (parallel blockchains) are employed to run DAPPS on Polkadot. A great example can be attributed to a developer opting for Ethereum (ETH) as the platform to program a new and innovative decentralized application through a collection of smart contracts.

When the same developer opts for Polkadot as the network to program his DAPPS, he would have to use parachains and NOT the smart contracts feature known to other networks.

After Satoshi Nakamoto created Bitcoin (BTC) which provided a template for others such as Vitalik Buterin, Charles Hoskinson and Charlie Lee to develop their own cryptocurrency, Ethereum (ETH) transcended cryptocurrency and saw other possibilities in blockchain and cryptography such as smart contracts.

By being the first mover in the creation of decentralized finance applications (DAPPS), Ethereum (ETH) created a set of rules (a template) for others to follow but Polkadot (DOT) also saw limitations with the use of smart contracts to create DAPPS and overrode those rules.

By programming individual blockchains to host decentralized applications instead of the template by Ethereum (smart contracts), Polkadot gives developers the freedom and control over their design which includes essential features such speed and fees (which are directly linked to scalability) whether data is private or public.

This does not mean that DOTs network does not support smart contracts, it does but it must be held in a PARACHAIN.

Overall, Polkadot (DOT) has four components that have several functions which explain how it works.

There is the RELAY CHAIN which is known across circles of cryptography as the heart of blockchain. It helps create shared security, consensus and interoperability across the different networks of chains.

PARACHAINS are parallel blockchains that are independent enough to have their own tokens and can be duly optimized for specific use cases.

PARATHREAD is a bit similar to parachains and makes provision for connection in a flexible way based on an economical model known as pay-as-you-go.

BRIDGE serves the primary purpose of creating a compatible connection that allows users to transfer data or tokens securely between blockchains whether they belong to public institutions or private enterprises.

Check Out: Is Polkadot a Good Investment?

What Does the DOT Currency Do?

The project is consistently being developed by Web3 Foundation which is based in Switzerland and categorizes its functions under Bonding, Staking and Governance.

DOT plays a role in governance whereby holders of the token are given the solemn power to vote with regards to the management of the blockchain.

Through these token holders (relay chain participants), the network automatically upgrades without hard forks. It must duly be noted that there are requirements to the voting process.

Under this, votes are in proportion to the amount of DOT which has been staked by a holder or user. There are certain cases where a token holder who meets the requirement to vote is unable to do so. In such a case, the person’s stake would be awarded to a minimum of six (6) and a maximum of twenty-four (24) members (special council) who would be elected to provide a vote for the absentee.

Staking is a process whereby holders of coins (in this case DOT) actively participate in a process called transaction validation which is similar to mining on a proof-of-stake blockchain. Under such blockchain, holders of coins that meet the minimum requirements of a specific cryptocurrency are selected and have rights to play two roles which are to become a nominator or a validator of transactions. Each role comes with a participatory reward.

The role of a validator is extremely important as it impacts the health of the network. The primary responsibility involves running nodes that operate 24 hours a day and 7 days a week to validate transactions on the DOT network and ensure it operates efficiently.

The role of nominator is relatively easier as they are tasked with electing validators.

DOTs role in the process of bonding is its use to launch parachains (new blockchains on the network). This comes into effect when DOTs are deposited. Bonded tokens are removed by returning it to holders when a parachain becomes outdated or non-useful (retired).

What to Watch Out For?

Inasmuch as Polkadot (DOT) is a highly enticing asset that shows great potential in the market for investment as a result of its features such as significantly improving interoperability, scalability and cross-chain functionality as well as making provision for the security of the entire network, it is still a relatively newer technology which has not achieved full functionality.

On the 30th April 2020, Gavin Wood, co-founder of Ethereum and founder of Polkadot shared a tweet that revealed deep information about the potential of the network if it’s functioning 100%.

Trading Education monitors the social media platforms of the main players in the crypto game to keep up with the progress of their projects and excerpts of his tweet go, “Latest benchmarks indicate @polkadotnetwork, even without parachains or multithreading; will still push a sustained rate in excess of 1,000 transactions per second. With parachains and multithreading then maybe 1,000,000 transactions per second, 100% secure, upgradable and decentralized”.

Such information puts the blockchain ahead of other technologies, but Polkadot finds itself in a saturated market where existing and new software developers look forward to making a claim for the largest share of the decentralized finance (DeFi) market. This means there is infinite competition for the blockchain.

As per data retrieved from behaviour, analysis and monitoring platform (SANBASE), Polkadot (DOT) is second only to Cardano (ADA) in terms of developer activity in April 2021 with 472.33 beating Kusama (KSM), Ethereum (ETH), Chainlink (LINK) and Tron (TRX) in the process.

Ren (REN), Celer Network (CELR) and Ocean Protocol (OCEAN) have seen a spike in trading volume as well as the number of holders of active holders and overall market valuation due to their networks integration with the Polkadot (DOT) protocol.

FX Leaders (online portal which tags itself as the home for forex traders, providing the best forex signals, trading news, market analysis and forex strategies for traders at all levels)  forecasts DOT to trade at a price in the range of $200 to $300 in the next two (2) to three (3) years.

Such news sounds great to the ears of developers and investors of the cryptocurrency as well as skeptics who are considering the potential of the asset in the market. This does not mean things would turn out as per the positive market sentiments on the crypto project. As a trader or investor, you should know that trading and investing in cryptocurrencies come at a huge risk.

As a result, as an e-learning organization, we would entrust you to do a thorough analysis (fundamental and technical) to be able to make your own decision with regards to your future investment decision on the asset (Polkadot).

With that said, Polkadot has done a great job eliminating congestion on its network which has reduced the high fees associated with blockchain and proof-of-work algorithms as well as making legacy blockchains compatible.

With the signs and partnerships of the network and more importantly, DOT not wanting to become an Ethereum Killer or the king of DeFi but instead unify all the blockchains makes the crypto trading asset a financial instrument any trader or investor may consider adding to their portfolio of investments.

How to Buy DOT?

After going through this short report on Polkadot (DOT), if you want to make a purchase of Polkadot, eToro is the brokerage that is well-positioned to offer you a platform where you can safely go about your trading and investing activities. It is highly secure and easy to navigate.

Quick guide: How to buy Polkadot

Follow the instructions above and you will be on your way towards purchasing your first DOTs.