The Ripple price has endured an extremely bearish weekend as an extended selloff continues into the ongoing session. XRP had slipped below the 200-day SMA on Friday, as the price dropped by over 5% and settled at $0.92. The price fell further on Saturday, dropping by over 8% and settling at $0.84. Saturday was also an extremely volatile session for XRP, as it dropped to an intraday low of $0.84. The current session sees XRP at $0.82, with sellers looking to drive it down to $0.80.

The Ripple price entered the previous weekend on an extremely bearish note, as the price dropped by almost 10% on Friday, slipping below the 200-day SMA and settling at $0.94. The price recovered over the weekend, rising by 0.40% on Saturday and then pushing up by 2.53% on Sunday to end the weekend at $0.96. The positive sentiment persisted on Monday, as XRP pushed above the 200-day SMA and settled at $0.99 before another increase of 0.88% on Tuesday pushed the price marginally higher. 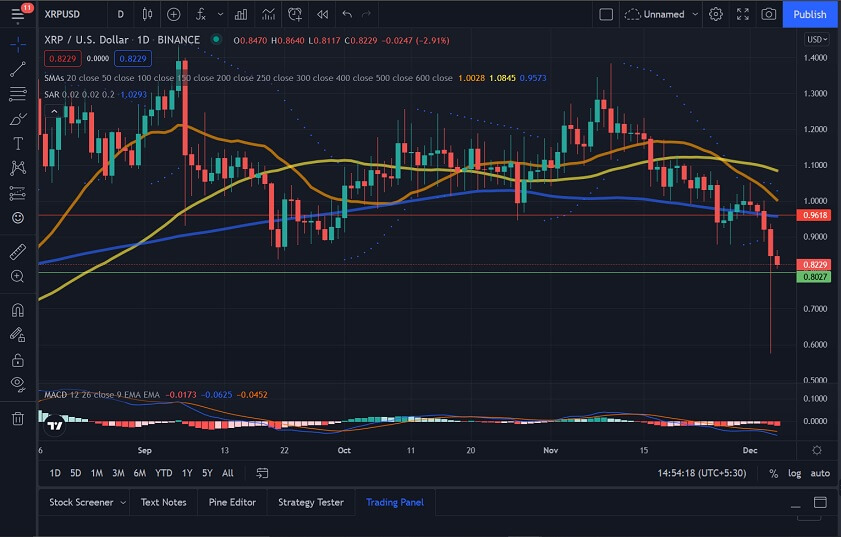 After pushing up to $0.99 on Tuesday, the Ripple price turned bearish, as it registered a marginal drop on Wednesday. On Thursday, the price fell back further, dropping by 1.79% and settling at $0.97. The bearish sentiment continued on Friday, as sellers pushed XRP below the 200-day SMA to $0.92, a fall of over 5%. The weekend saw the selloff continue, as XRP dropped over 8% on Saturday, slipping below $0.90 and dropping to $0.84. The current session sees XRP still in the red, with sellers looking to push the price down to $0.80. 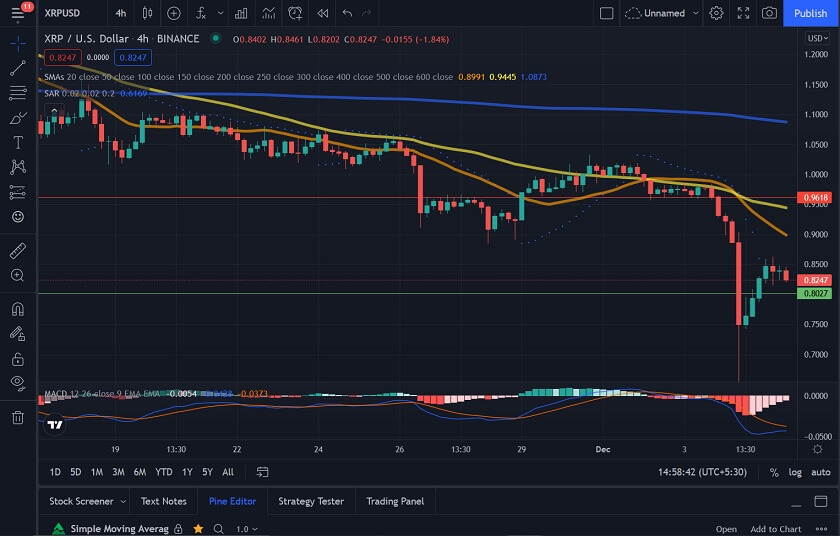 Looking at the 4-hour Ripple price chart, we can see that XRP had dropped to $0.93 on the 26th, slipping below the 20-bar SMA. The XRP registered a marginal increase from this level before dropping to $0.90 on the 28th. The price pushed up significantly from this level, as it pushed above the 20-bar SMA on the 29th, rising to $0.96. XRP continued to push higher, moving above the 50-bar SMA on the 30th and settling at $1.01. With the 50-bar SMA acting as support, XRP was able to stay at this level for the next few sessions before slipping back below the 20 and 50-bar SMAs. The price continued to drop, falling to $0.75 on the 4th, before pushing up to its current level of $0.83.

Ripple vs. SEC: Here’s The Latest From The Lawsuit

Both Ripple Labs and the US Securities and Exchanges Commission (SEC) should soon provide additional arguments to supplement their positions. According to the scanned copy of a document shared by Attorney Filan, US Magistrate Judge Sarah Netburn has issued an order asking Ripple Labs and the SEC to "simultaneously" file letter briefs.

The firms should file the briefs before December 8, 2021. New papers should supplement the parties' arguments regarding Ripple's latest motion to compel. The crypto community believes that the obligation to provide new briefs was anticipated and should be interpreted as a small win for Ripple.

At the same time, attorney Jeremy Hogan shared that this extraordinary document ("law change") favors the position of the Securities and Exchange Commission. However, commentators should wait for the release of new briefs, Hogan concluded.

In December 2020, the SEC accused Ripple Labs and its key officials, Brad Garlinghouse and Chris Larsen, of offering illegal securities to US citizens in the form of XRP tokens. This year-long legal battle has highlighted many crucial questions regarding crypto regulation in the US, such as the status of crypto tokens and securities.

Ripple also recently announced a financial liquidity hub planned for 2022. The goal of the project is to assist financial services entities in offering their clients the opportunity to buy and sell cryptocurrencies. The functionality will provide enterprise clients access to digital assets from various sources, including market makers and exchanges.

Looking at the Ripple price chart, we see that XRP has been extremely bearish since Friday. If sellers retain control of Sunday’s session, we could see the price drop to $0.80.