Ripple Price Prediction: XRP Falls Back In the Red, Drops Below $0.60

The Ripple price started the new week in the red, as sellers pushed the price below $0.60 during the ongoing session, with XRP currently at $0.58. XRP had dropped by 1.57% on Thursday before recovering on Friday and registering a marginal recovery of 0.30%. The weekend started with the positive sentiment persisting, as XRP rose by 1.01% on Saturday and moved to $0.61. However, the price fell back on Sunday, dropping by 2.49% and ending the weekend at $0.60, before dropping further during the ongoing session.

The Ripple price was extremely bearish heading into the previous weekend, dropping by 11.49% on Friday and settling at $0.63. The price continued to drop on Saturday, falling over 6%, before making a strong recovery on Sunday, rising by over 5% and ending the weekend at $0.62. Monday saw XRP back in the red, as it fell by nearly 3%, dropping to $0.61, before making a recovery on Tuesday and rising by nearly 1%. The price managed to remain in the green on Wednesday as well, registering a marginal increase of 0.24%. 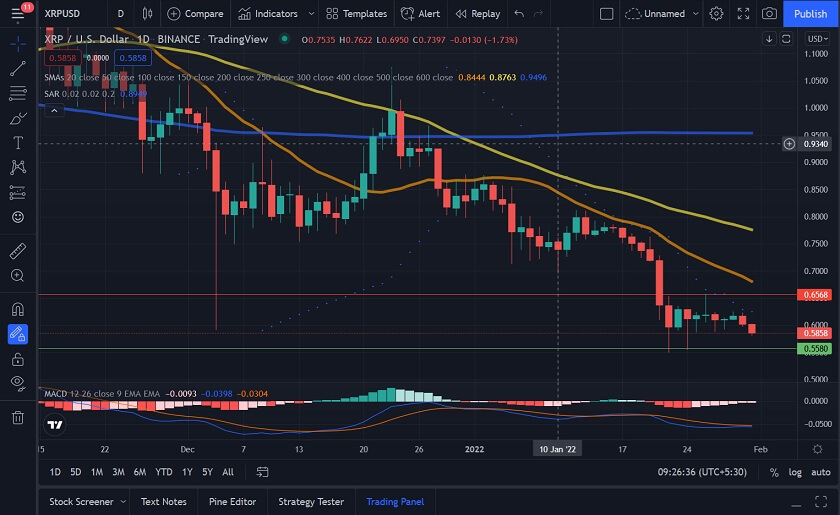 After registering a marginal increase on Wednesday, the Ripple price fell back on Thursday, dropping by nearly 2% and falling to $0.60. The price recovered on Friday, registering a marginal increase of 0.30%, before pushing up by just over 1% on Saturday and settling at $0.61. The price fell back in the red on Sunday, dropping by 2.49% and ending the weekend on a bearish note at $0.60. The current session shows that XRP has slipped below $0.60, with the price currently at $0.58. 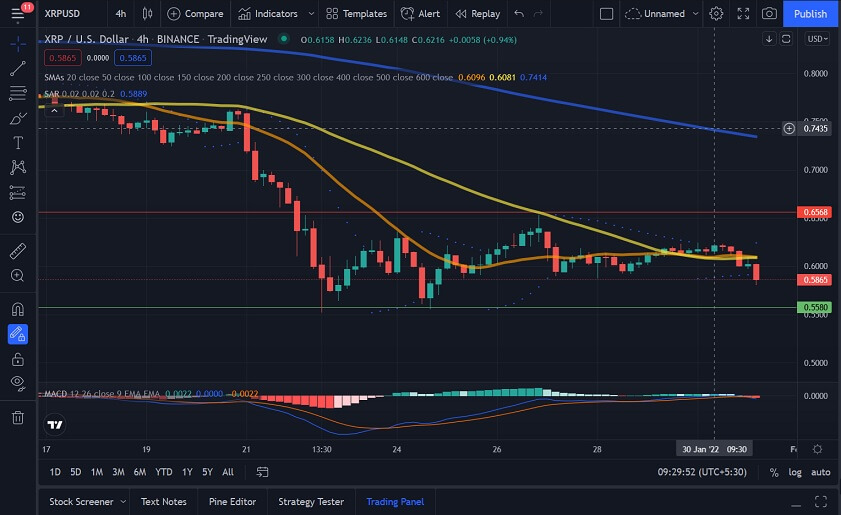 Looking at the 4-hour Ripple price chart, we can see that XRP had dropped to $0.56 on the 24th. XRP made a fairly strong recovery from this level, rising to $0.61 and then pushing above the 20-bar SMA and moving to $0.63 on the 26th. However, after reaching this level, the price fell back below the 20-bar SMA and settled at $0.59. The price pushed back up from this level, rising to $0.61, but with the 20-bar SMA acting as resistance, could not move past this level, dropping to $0.59 on the 28th. XRP was able to push past this level on the 29th when it moved past the 20 and 50-bar SMAs and settled at $0.62. However, the price fell back after reaching this level, slipping back below the 20 and 50-bar SMAs and moving to its current level of $0.58.

We can see that the MACD and Parabolic SAR have both flipped to bearish, indicating that we could see the price drop further.

Ripple, the crypto company behind XRP, recently bought back its shares from Tetragon Financial Group. The move closes the long-standing dispute between the two firms that began after the SEC brought a lawsuit against Ripple in 2020, accusing the fintech company of selling unregistered securities in the form of XRP tokens.

“Excited to announce Ripple bought back our Series C (Dec 2019) shares at a $15B valuation!”

He outlined why Ripple was set to get bigger than it has ever been in 2022. Garlinghouse noted that despite the tough times the company faced in 2021, Ripple recorded its best year yet financially.

“2022 – ‘slow down’ is not in our vocabulary. Even with 2021’s headwinds, it was our best year on record, and Ripple’s financial position ($1B in the bank) is the strongest we’ve ever been.”

Regardless of the battle with the SEC, Ripple was able to enter several partnerships with international banks to provide cross-border payment services, bringing crypto native services to the traditional financial institutions. Garlinghouse noted that RippleNet currently handles a volume rate greater than $10 billion for its clients.

He also noted that RippleX, its open-source payments network, has seen new capabilities added to the XRP Ledger, including NFTs, CBDCs, and sidechains.

Looking at the Ripple price chart, we can see that XRP has started the week on a fairly bearish note, with sellers having pushed the price down considerably during the ongoing session. If the current sentiment persists, we could see XRP drop to $0.55.