The Ripple price registered another marginal drop as buyers and sellers struggled to take control of the ongoing session. XRP had started the week on an extremely bullish note, surging by nearly 22%, pushing above the 50-day SMA, and settling at $0.83. Tuesday saw XRP remain bullish, as the price rose to $0.87 before registering a marginal drop on Wednesday and dropping to $0.086.

The Ripple price started the previous week fairly, rising by nearly 3% and pushing to $0.61. XRP continued to push higher on Tuesday, rising by 1.70% but fell back on Wednesday as the price dropped by over 4% and fell to $0.60. The price recovered on Thursday, rising by 1.46%, before pushing up by nearly 8% on Friday, going above the 20-day SMA and settling at $0.65. 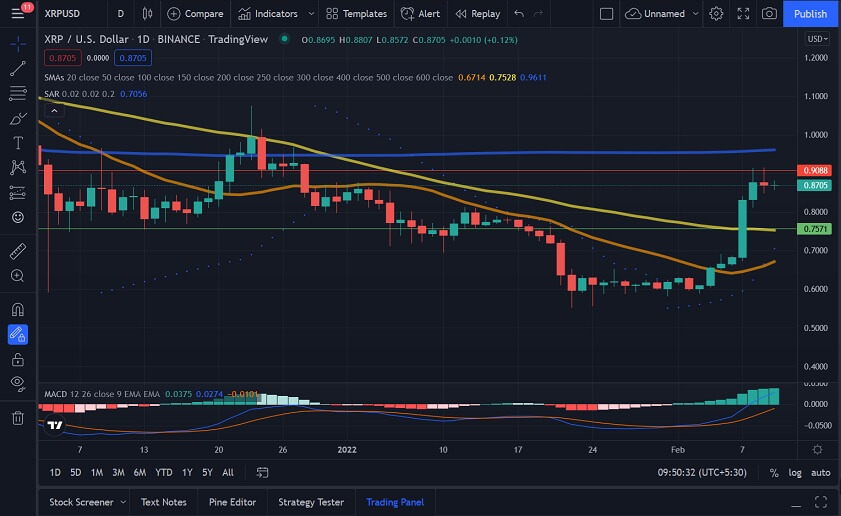 The weekend saw the Ripple price remain bullish, as it rose by 1.56% on Saturday and then by nearly 3% on Sunday to end the weekend at $0.68. Monday saw XRP register a considerable increase, as the price pushed up by nearly 22%, surging past the 50-day SMA and rising to $0.83 before another increase on Tuesday saw the price push up to $0.87. The price fell back on Wednesday, dropping by 0.87% before registering another marginal drop during the current session.

We can see that the MACD is currently bullish, indicating that we could see the price recover from its current level.

We can see that the MACD and Parabolic SAR have both flipped to bearish, indicating that we could see the price drop further.