The Ripple price continued to drop after failing to move past the 50-day SMA on Wednesday, as markets crashed due to a host of factors. XRP had started the week in the red, dropping below the 20 and 50-day SMAs on Monday and settling at $0.70. On Tuesday, the price recovered but fell back again on Wednesday, dropping by almost 4%, falling to $0.69. The current session sees XRP down by almost 9%, with sellers looking to push the price lower.

The Ripple price had started the previous week on a fairly bearish note, registering a marginal drop on Monday. The price recovered on Tuesday, pushing up by over 6% and moving to $0.85, before dropping back on Wednesday, falling to $0.83. Thursday saw the bearish sentiment intensify, with the price falling by over 8%, dropping to $0.68. Despite the bearish sentiment, XRP recovered on Friday, rising by over 2% and settling at $0.78. 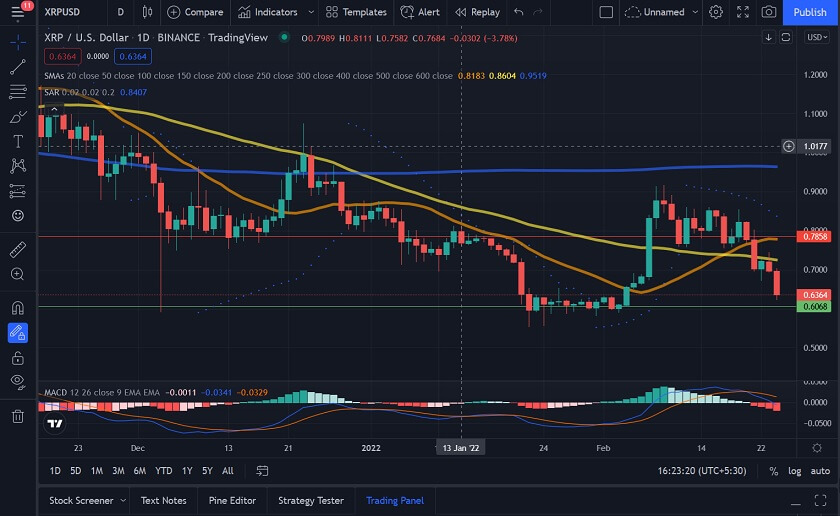 The bullish sentiment persisted over the weekend, as the Ripple price pushed up by almost 5% on Saturday, moving to $0.82. However, the price fell back on Sunday, dropping by 5.50% to $0.77. Monday saw the Ripple price continue to drop, as it slipped below the 20 and 50-day SMAs, dropping to $0.70 after a fall of almost 10%. On Tuesday, the price pushed up, but with the 50-day SMA acting as resistance fell back on Wednesday, falling by 3.52% and then registering a sharp drop during the ongoing session.

More On Ripple: Is Ripple a Good Investment? 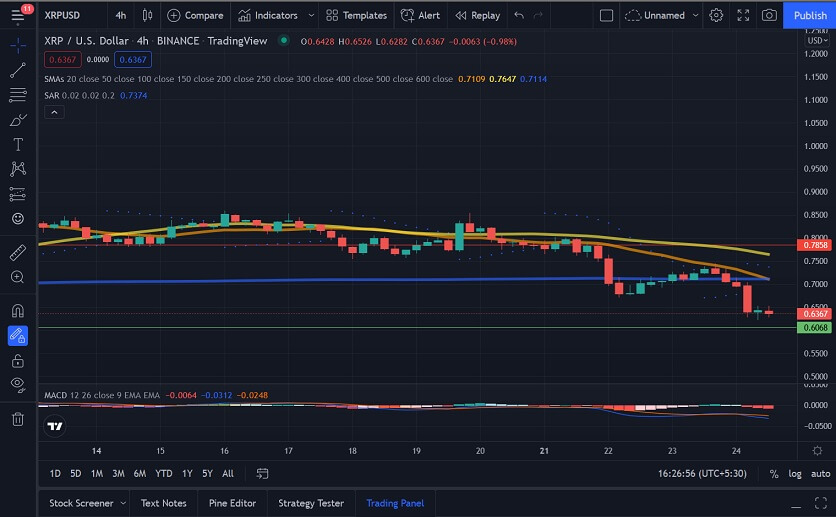 Looking at the 4-hour Ripple price chart, we can see that XRP had pushed up to $0.83 on the 19th, pushing above the 20 and 50-bar SMAs. The price fell back from this level, dropping back below the 20 and 50-bar SMAs and settling at $0.77. XRP pushed up marginally from this level but fell back significantly, falling below the 200-bar SMA and settling at $0.67 on the 22nd. The price pushed back up from this point, moving back above the 200-bar SMA and rising to $0.73 on the 23rd. However, the price could not move past the 20-bar SMA and fell back, dropping to its current level of $0.63.

Looking at the Ripple price chart, we see that XRP has registered a significant drop during the current session. If the bearish sentiment persists, we could see XRP drop to $0.60 or below.

Will Ripple Make Me Rich in 10 Years?

Should You Buy Ripple?

Why Ripple Will Skyrocket

Is It a Good Time to Buy Ripple?