The Ripple price looks set to push to $0.90 as the price surged after favorable developments for XRP in the case in the SEC. XRP was quite bullish over the weekend after it had pushed up to $0.66 on Friday. The price continued to push higher on Saturday, registering an increase of 1.56% and then rising by nearly 3% on Sunday to end the weekend at $0.68. Monday saw XRP surge by nearly 22% as the price rose to $0.83, with XRP currently at $0.88 during the ongoing session.

The Ripple price started the previous weekend by registering a marginal increase on Saturday. The price fell back on Sunday, as XRP fell by 2.51% and ended the weekend at $0.60. Monday saw XRP register a fairly strong recovery, rising by 2.61% and moving to $0.61 before another increase on Tuesday pushed the price to $0.62. However, XRP fell back on Wednesday, dropping over 4% and settling at $0.60 before recovering on Thursday and rising to $0.61. 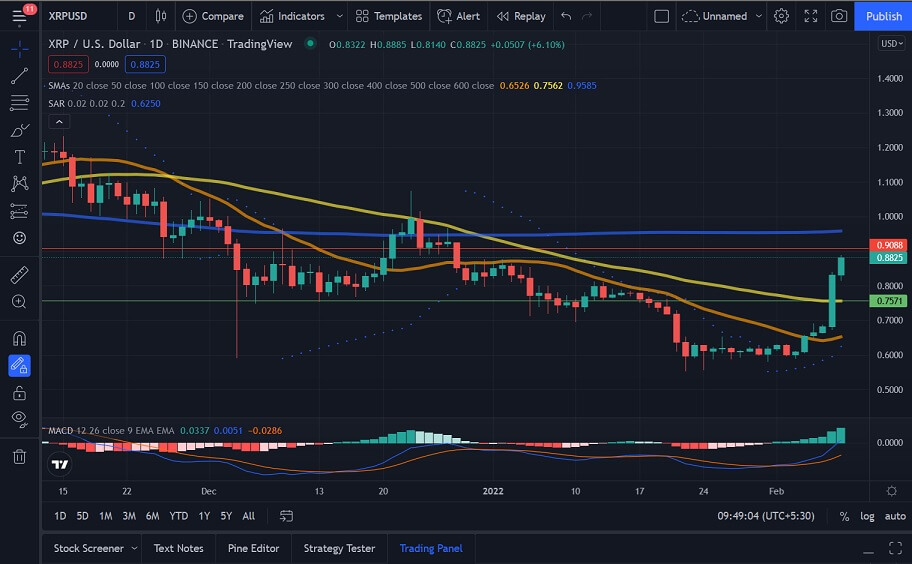 The Ripple price continued to push higher on Friday, rising by over 7% and moving to $0.65. XRP continued to push higher from this level, going past the 20-day SMA on Saturday and then rising by 2.60% on Sunday to end the weekend at $0.68. The current week started with a spectacular surge for XRP as it rose by nearly 22%, going past the 50-day SMA and settling at $0.83. The current session sees XRP at $0.87, as buyers look to push the price higher. 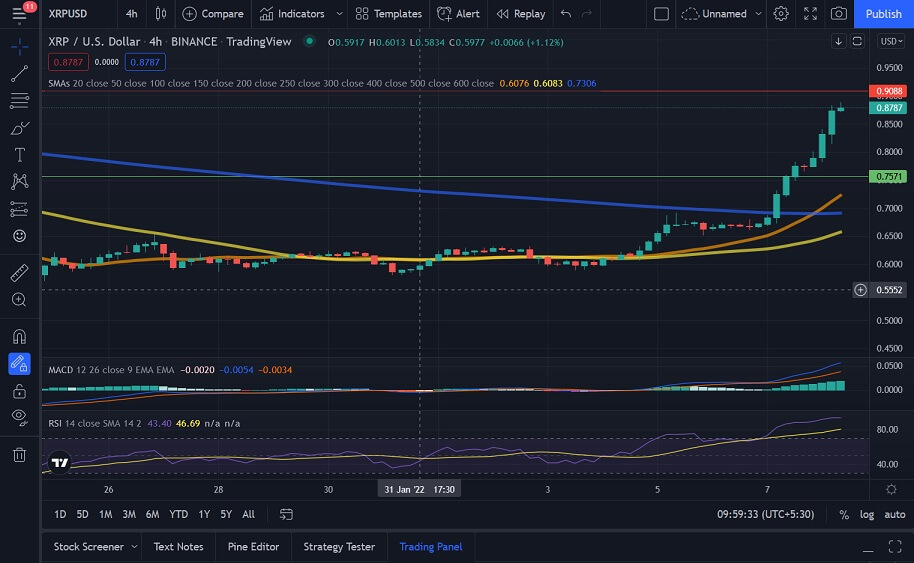 Looking at the 4-hour Chainlink price chart, we see that XRP was at $0.62 on the 2nd. The price fell back from this level, dropping below the 20 and 50-bar SMAs and falling to $0.59 on the 3rd. With the 20 and 50-bar SMAs now acting as resistance, XRP could not move past this level until the 4th, when the price pushed back above the SMAs and moved to $0.62. XRP continued to push higher from this level, rising to $0.67 and then dropping back to $0.66 on the 6th. XRP surged from this level, going past the 200-bar SMA and surging to its current level of $0.87.

We can see that the price has pushed above the neutral zone, indicating that we could see a correction in the price.

Looking at the Ripple price chart, we see that XRP has been extremely bullish in recent sessions and registered a spectacular surge on Monday. If the current sentiment persists, we could see XRP push to $0.90. However, if the price drops, XRP could fall to $0.80, with the RSI indicating that the price is above the neutral zone.