The Ripple price registered a sharp drop during the current session, as it dropped below $1.05, with sellers dominating the session. XRP had dropped drastically over the weekend as well, dropping to $1.05 on Sunday. Monday saw the price drop further, falling to $1.03, before pushing up on Tuesday. XRP rose by almost 3% on Tuesday, moving up to $1.06, before falling back in the red during the current session.

The Ripple price started the previous week in the red, registering a drop of 1.27% on Monday. Tuesday saw a sharp drop that saw XRP fall by over 7%, slipping below the 20 and 50-day SMAs and settling at $1.08. XRP made a marginal recovery on Wednesday but fell back on Thursday, falling by almost 5% and dropping to $1.04. However, with strong support at this level, XRP pushed back up on Friday, rising to $1.09 after an increase of 4.78%. 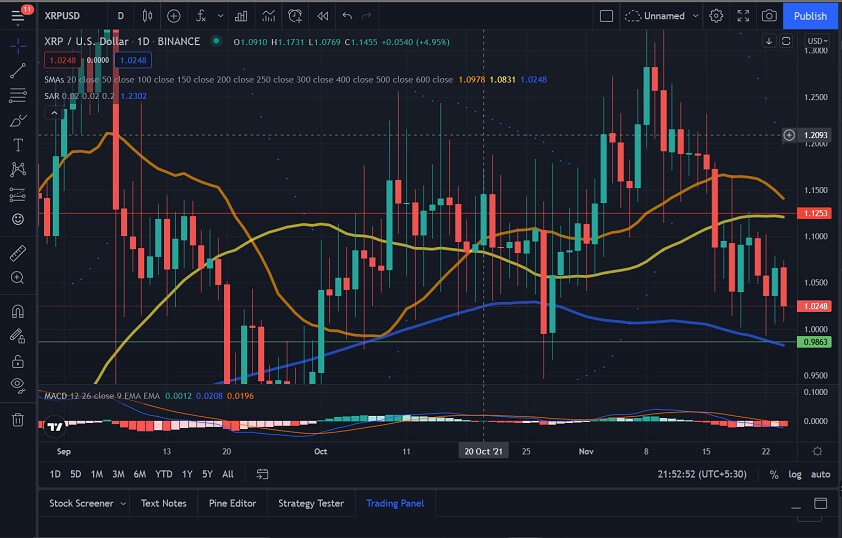 The Ripple price continued to push up on Saturday, as it registered an increase of 0.69% on Saturday. However, Sunday saw the bearish sentiment return, with XRP falling by 3.65% and settling at $1.05. Sellers continued to push the price down on Monday as XRP dropped by over 2% to $1.03. Before recovering on Tuesday and rising to $1.06. However, the price fell back on Wednesday, currently at $1.02, with sellers looking to push it below $1.

We can see that the MACD is quite bearish, indicating that we could see the price drop further. 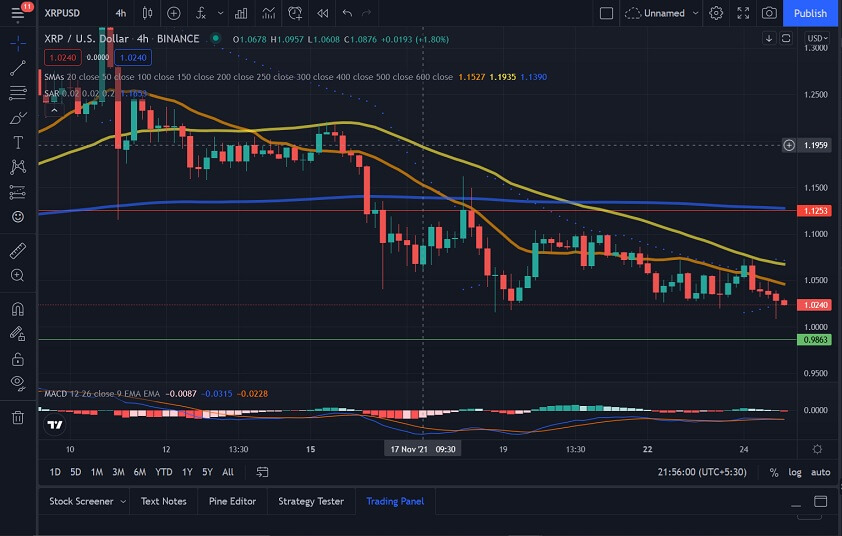 We can see that the Parabolic SAR has flipped to bearish, indicating that XRP could drop further.

Ripple CEO Brad Garlinghouse recently said the ongoing SEC lawsuit would likely conclude by next year. It has been nearly a year since the US securities regulator first filed a notice accusing Ripple of selling $1.3 billion of unregistered securities.

The backlash that followed has exposed the SEC on several fronts, including allegations of favoritism (concerning Bitcoin, and especially Ethereum), while also revealing inconsistent fair notice and due process standards.

Speaking to CNBC, Garlinghouse said the judicial process, while slow-moving as expected, is still moving along nicely.

He commented on the judges’ competence with getting to grips with the matter at hand while also considering the bigger picture in terms of how this case would affect the crypto market as a whole.

“Clearly we’re seeing good questions asked by the judge. And I think the judge realizes this is not just about Ripple, this will have broader implications.”

With that, Garlinghouse holds hope that the matter can be concluded by next year. Some XRP holders have been critical of the SEC’s handling and timing, arguing that the lawsuit has cost them money in terms of curbing the XRP price during a bull run.

As far as courtroom specifics go, a recent post on the matter by the founder of crypto-law.us, John Deaton, talked about Judge Netburn’s acknowledgment that the SEC’s “over-broad and far reaching” argument would criminalize every individual XRP seller.

“Judge Netburn recognized the SEC’s over-broad and far-reaching theory that all XRP are securities when she recognized, according to the SEC’s own argument, that every person in the world selling #XRP is committing a Section 5 violation.”

The SEC countered this point by saying that while the Securities Act 1933 requires all sellers to register under Section 5, there is also an exemption provided under Section 4, which, “very generally” speaking, excludes transactions by people in the market.

The Ripple price chart shows us that XRP has fallen significantly so far, and if the current sentiment persists, we could see it slip below $1.