The Ripple price could not push to $0.80, as sellers pushed the price marginally down during the current session. XRP had started the week in the red, dropping by 1.71% on Monday and settling at $0.73. The price was able to recover from this level, as it pushed up by over 4% on Tuesday, moving to $0.77. Wednesday saw XRP move to $0.79, as it rose by 3.69% before falling back during the current session.

The Ripple price was quite bearish at the start of the previous week, as it dropped by 3.15% on Monday and then fell by 1.14% on Tuesday to settle at $0.82. Wednesday saw XRP slip below $0.80, as the price dropped by over 6%, falling to $0.77. Despite the bearish sentiment, XRP was able to register a marginal recovery on Thursday but fell back in the red on Friday, falling over 2% and settling at $0.76. The price continued to drop on Saturday as well, with XRP falling to $0.74. 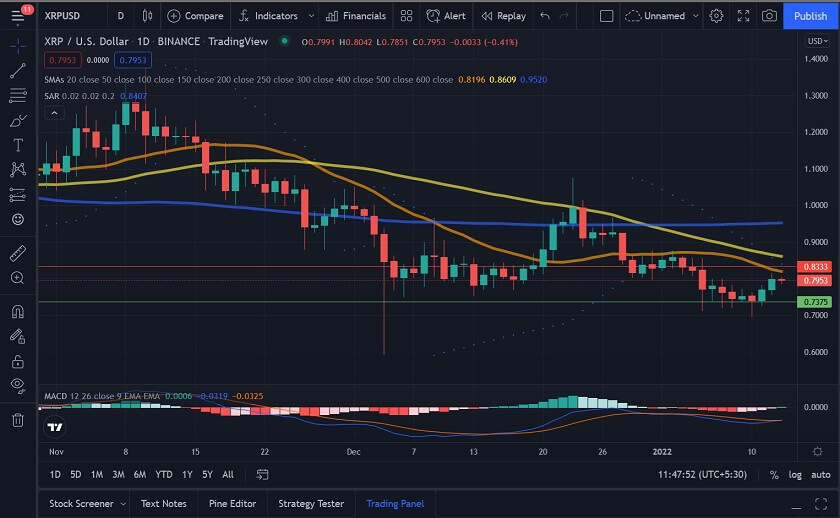 The Ripple price was able to register a marginal recovery on Sunday, rising by 0.98% and settling at $0.75. The price fell back in the red on Monday, dropping by 1.71%, before making a strong recovery on Tuesday, rising by over 4% and moving to $0.77. Wednesday saw XRP continue to push up, as the price moved to $0.79, after an increase of almost 4%. However, the current session sees XRP back in the red after encountering resistance at this level.

We can see that the MACD has flipped to bullish, indicating that the price could recover from this level. 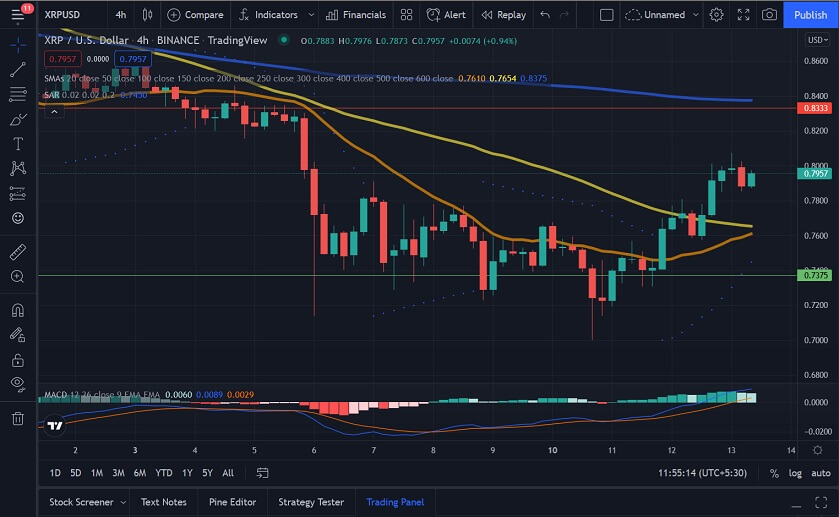 The MACD and Parabolic SAR are bullish, indicating that we could see the price push higher.

XRP Can Now Be Sent To Human-Readable Addresses, Here's How

XUMM, a non-custodial wallet by XRPL Labs, has scored a partnership that will ease the process of money sending for XRPL users. XUMM is a mainstream retail wallet for XRP and assets issued on XRP Ledger distributed network.

According to the official joint announcement shared by the Foundation for Interwallet Operability (FIO) and XUMM, the wallet integrates FIO Send, a crucial function of the FIO ecosystem. The firm said:

"We're thrilled to announce @XummWallet is integrating FIO Send, a core feature of #FIO Protocol, to bring better usability to their 500,000 global users! XUMM is one of the top non-custodial wallets to manage/use your $XRP & any other issued token on the XRP Ledger!"

More than half a million XUMM users can send and receive money through XUMM's new function. With FIO Send, crypto users can replace their auto-generated addresses with cashtags (handles).

Like the CashApp mobile application, users can choose the FIO Crypto Handle. This opportunity will accelerate the adoption of crypto among new-coiners confused by the long addresses of public wallets and make the interaction of existing Web3 enthusiasts easier and safer.

FIO Protocol is a multi-blockchain infrastructure vendor: it has advanced the UX/UI of many payment protocols on various blockchain networks. Previously, human-readable addresses were available to XRP owners who use the Sologenic XRPL-based ecosystem.

The Ripple price chart shows us that XRP has pushed back to $0.79 at the time of writing. If the current sentiment persists, we could see XRP move past $0.80.