Ripple Technical Analysis: XRP Pulls Back To $0.60, Recovery On The Horizon?

The Ripple price started the previous weekend on a fairly positive note, rising by 0.57% on Saturday before dropping back in the red on Sunday and registering a marginal drop. XRP continued to remain in the red on Monday, dropping by 2.18% and falling to $0.76. XRP continued to drop on Tuesday and Wednesday, falling by 1.46% and 1.76%, respectively, and then registered a drop of 2.40% on Thursday, bringing the price down to $0.72. 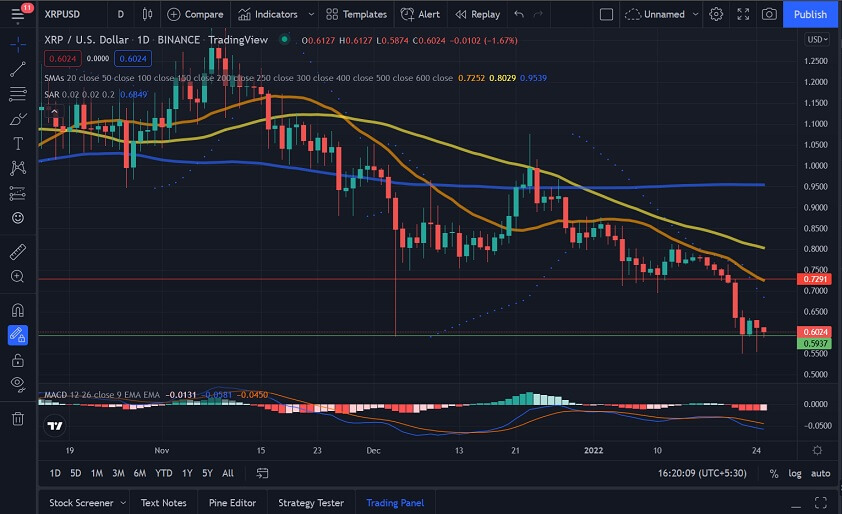 The Ripple price continued to remain in the red on Friday, as it registered a significant drop of 11.55%, driving the price down to $0.63. The weekend started with the bearish sentiment persisting, as XRP dropped by 6.31% on Saturday, dropping to $0.59. Despite the prevailing bearish sentiment, XRP was able to register a significant recovery on Sunday, rising by over 5% and ending the weekend at $0.62. However, XRP fell back in the red on Monday, dropping to $0.61, with the price presently at $0.60. 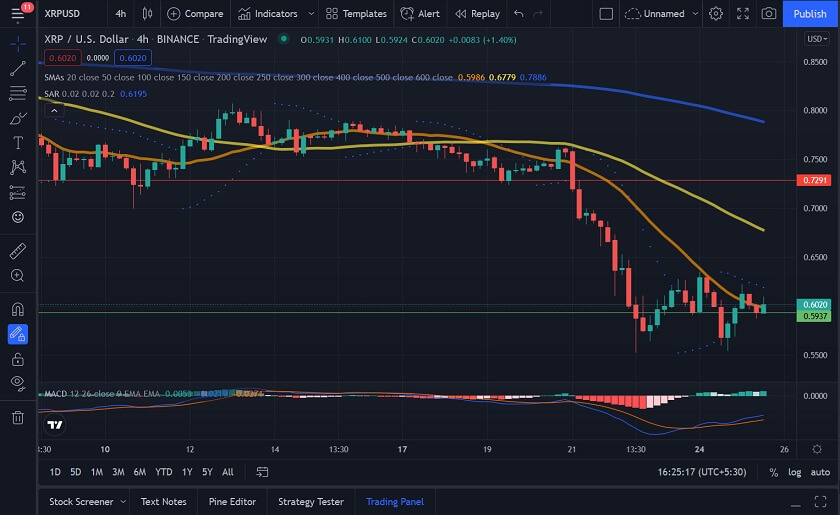 We can see that the MACD is currently bullish, and if the price increases, we could see the Parabolic SAR also flip to bullish.

Federal Judge Sarah Netburn recently gave the US Securities and Exchange Commission (SEC) until Feb. 17 to fight her earlier order to turn over to the defendant Ripple Labs certain sensitive government documents.

Ripple and XRP investors earlier believed they had won a legal skirmish after Judge Netburn ordered the SEC to turn over the documents. These included notes of private SEC meetings with third parties over Ethereum and the draft of a controversial 2018 speech by then-SEC director William Hinman that declared Bitcoin and Ether were not securities.

But the SEC pushed back by asking for more time to argue against the disclosure order, and Netburn is now giving the commission nearly four weeks to do so. The SEC sued Ripple Labs and two top company executives in December 2020, alleging that its sale of XRP was an unregistered securities offering worth over US$1.38 billion.

In its defense, the San Francisco-based payments technology company is arguing that the SEC did not provide “fair notice” that it would treat the XRP token differently from Bitcoin and Ether. As the US and other countries are still developing a regulatory framework over digital assets, the SEC v. Ripple lawsuit is closely watched for its potential to legally define cryptocurrencies.

Ripple has been crying foul at the lack of regulatory clarity since the start of its legal battle with the SEC, and it’s determined to find out why the regulator started “picking winners and losers.” Ripple started seeking documents related to Bitcoin and Ethereum shortly after it was hit with the lawsuit in December 2020, filing a Freedom of Information request last January.

Looking at the Ripple price chart, we can see that XRP has registered a marginal recovery during the ongoing session, moving to $0.60 from a low of $0.58. While XRP remains marginally down, we could expect the price to push above $0.60.