Ripple Technical Analysis: XRP Pushes Above $1.20 After Positive Start To The Week

The Ripple price pushed up above $1.20 during the current session. The increase comes after a reasonably static weekend that did not see much movement. XRP has been quite bearish since it rose to $1.28 on Monday and has been in a slump since then. XRP saw a significant fall of over 5% on Wednesday, and by Friday, the price was down to $1.18

The Ripple price started the previous weekend in the red, registering a marginal drop on Saturday. However, the price made a strong recovery on Sunday, as it rose by almost 6% and settled at $1.22, ending the weekend on a positive note. XRP continued to push up on Monday, as it started the week on a bullish note, rising by 5.04% and moving up to $1.28. Despite the bullish start to the week, XRP fell on Tuesday, dropping by 1.95%, before falling by over 5% on Wednesday and dropping to $1.19. 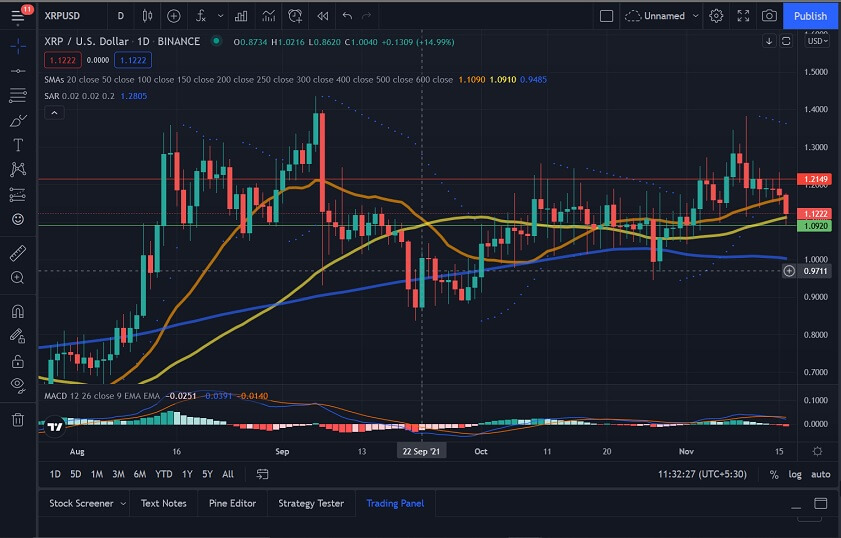 After a significant drop on Wednesday, the Ripple price recovered on Thursday, rising to $1.21. However, on Friday, the price fell back as sellers pushed the price down by 2.14%, as XRP settled at $1.18. The weekend did not see much movement as XRP remained fairly static, registering a marginal increase on Saturday and a marginal drop on Sunday. The current session sees buyers in control, with the price up by almost 2%. While the Parabolic SAR and MACD are both bearish, we could see them flip to bullish if the price continues to increase. 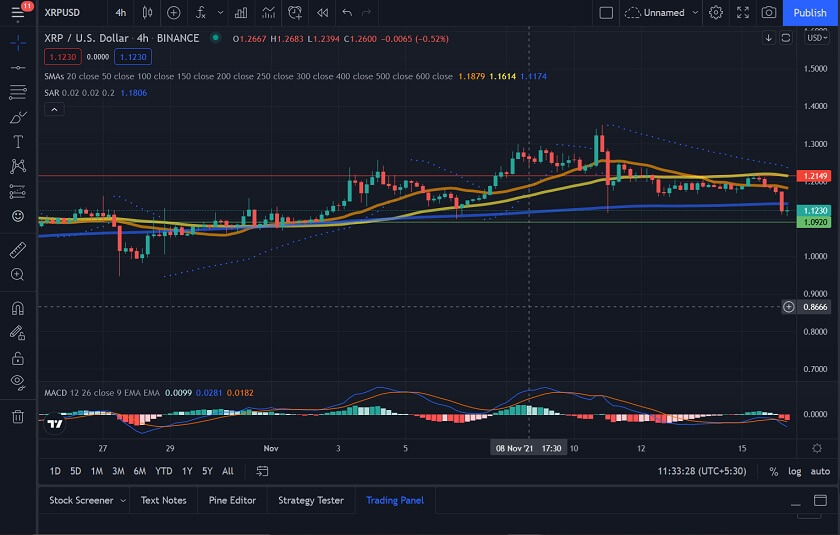 Looking at the 4-hour Ripple price chart, we can see that XRP had pushed up to $1.27 on the 8th before falling to $1.22. The 20-bar SMA acted as support at this level, as the price pushed up to $1.32. XRP dropped drastically from this level as the price slipped below the 20 and 50-bar SMAs and settled at $1.19. After rising to $1.24, XRP fell back thanks to the 20-bar SMA acting as resistance. The price dropped below the 50-bar SMA and settled at $1.17. XRP could not push beyond this level for the next few sessions, thanks to the 20-bar and 50-bar SMA, both acting as resistance. XRP then pushed past the 20-bar SMA on the 15th, as it rose to its current level of $1.20. We can see that while the Parabolic SAR is bearish, the MACD is bullish, indicating that the price could push up during the current session.

UAE And Pakistan Now Has A RippleNet Corridor

Bank Alfalah, one of Pakistan’s private banks, has joined forces with LuLu Exchange, the Abu Dhabi-based remittance and foreign exchange company to open a remittance corridor.

Payments between the two countries will be conducted with the help of the RippleNet Cloud service. Earlier this year, LuLu Exchange also opened remittance corridors to India and Egypt.

Pakistanis constitute roughly 12.5% of the total population of the United Arab Emirates. The UAE is also the second-largest source of remittances for Pakistan. In his statement, Bank Alfalah CEO Atif Bajwa said that Ripple helps to strengthen financial bridges between the two countries:

"The partnership with RippleNet will help us deepen our partnership with Lulu Exchange and strengthen the financial bridges between Pakistanis residing in the UAE and their families back home."

In a recent interview, David Schwartz, an architect of XRP Ledger (XRPL) and Ripple’s CTO, talked about the XRP Ledger. He said:

“Well, I started working on what we now call the XRP Ledger at the end of 2011; so I’ve been at this for eight [or] nine years… but the changes have been drastic. I mean in the early days all we had was the ability to perform a transaction on a decentralized ledger in just a couple of seconds, and then we started to realize that the properties of the algorithms that we developed allowed us to do things like a decentralized exchange.

And then we had this idea of allowing people to issue assets and ideas like community credit, and we put all that together into a functional system probably in mid 2012.”

Looking at the Ripple price chart, we can see that XRP has made a recovery during the current session after a fairly static weekend. If the price continues to push up, then we could see XRP push towards $1.25.