The Shiba Inu price registered a marginal drop during the ongoing session, as the price dropped to $0.000045. SHIB had been quite static over the weekend, with the price not seeing much movement. However, the price pushed up significantly on Monday, as it rose by over 15% and moved up to $0.000045. Tuesday saw SHIB continue to push up, as it rose above the 50-day SMA and settled at $0.000047 before dropping during the current session. 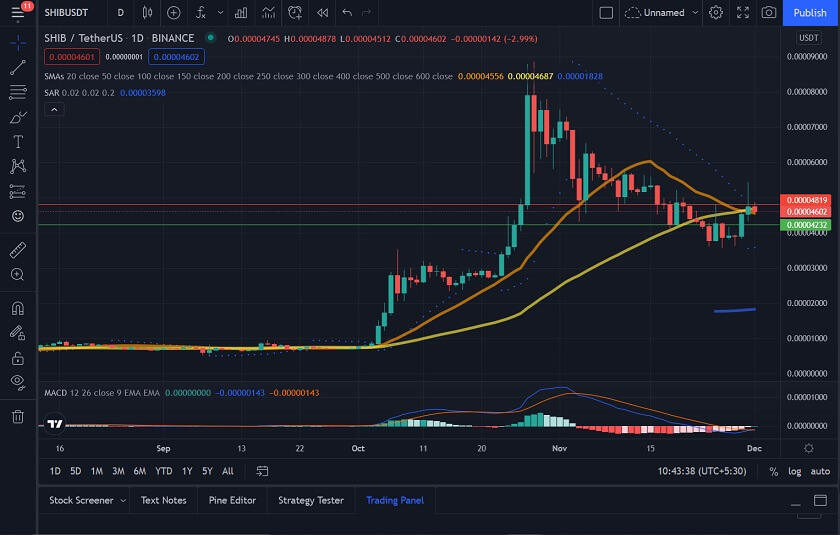 After pushing up by over 12% on Thursday, the Shiba Inu price fell back on Friday, registering a drop of over 9% and settling at $0.000038. The weekend did not see much movement, with SHIB registering a marginal increase on Saturday and a marginal drop on Sunday. The price pushed up considerably on Monday as SHIB started the week positively, pushing up by over 15% and settling at $0.000045. Tuesday saw SHIB push above the 50-day SMA before dropping back during the current session.

We can see that the Parabolic SAR has flipped to bullish, indicating that we could see the price push higher. However, if SHIB continues to drop, it could flip back to bearish.

Looking at IntoTheBlock’s IOMAP for the Shiba Inu price, we can see that SHIB faces strong resistance at around $0.000048. At this price level, more than 41,000 addresses have sold more than 16,944 SHIB. 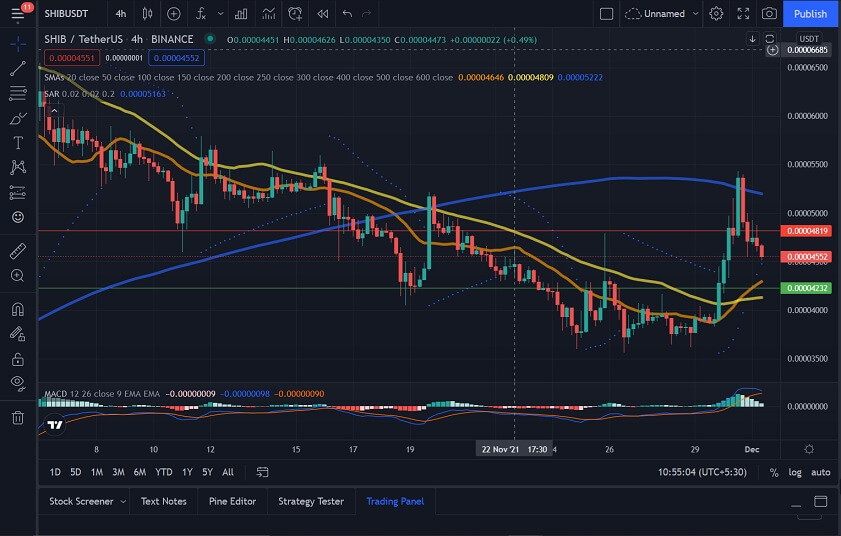 The platform noted that there would be a minimum deposit of 373,000 SHIB ($16), and the minimum trading volume is 50,000 SHIB ($2). SHIB will initially be tradeable against the USD and euro pairs. However, Kraken Futures and Margin Trading for SHIB were not available at launch.

“I wouldn’t describe Kraken as being the place where every single coin is listed, that’s not been what we have been known for.”

Kraken is one of the least conservative exchanges, with 93 assets on the exchange in total. Meanwhile, Coinbase supports 51 tokens, and Robinhood only supports seven.

Other exchanges have been hesitant to list the Dogecoin-inspired altcoin over regulatory concerns, despite increasing pressure from their users. On Friday, SHIB surpassed 1 million holders despite trading 50% below its all-time high.

On November 10, Robinhood chief operating officer Christine Brown said that the platform’s “strategy is different than a lot of the other players out there who are racing to list as many assets as possible right now.” The Change.org petition requesting that Robinhood list the Shiba Inu coin has amassed over half a million signatures.

Newegg Commerce, a Nasdaq-listed major online retailer, recently confirmed it would soon accept payments in the meme-inspired cryptocurrency Shiba Inu ($SHIB). When exactly the platform plans to do so is unclear.

Newegg took to Twitter to reveal Shiba Inu as a payment option was “coming soon.” The tweet came shortly after it tagged Shiba Inu’s official account and its project leader asking for a direct message to ask them a question.

Shiba Inu has notably seen its price surge this year over a retail trading frenzy that allowed one investor who bet $8,000 in the cryptocurrency to at one point have $5.7 billion in its wallet. Shiba Inu’s adoption has kept on growing despite a recent drop in crypto asset prices.

A report from CertiK revealed there are now 1.05 million Ethereum addresses with SHIB in their balance as the cryptocurrency consistently kept adding between 30,000 and 40,000 new users daily.

Newegg’s announcement comes after it revealed (in April) it would accept payments in Dogecoin (DOGE), which is now usable on the company’s website to buy consumer electronics, entertainment, smart home, and gaming products.

Notably, Newegg was one of the first major retailers to start accepting cryptocurrency payments. In 2014, the company started accepting Bitcoin ($BTC) for payments and expanded its offering to include $LTC, $BCH, $ETH, $USDC, etc.

The Shiba Inu price chart shows us that SHIB has fallen during the current session after it had pushed to $0.000047 on Tuesday. If the current sentiment persists, we could see the price drop to the support level of $0.000042.